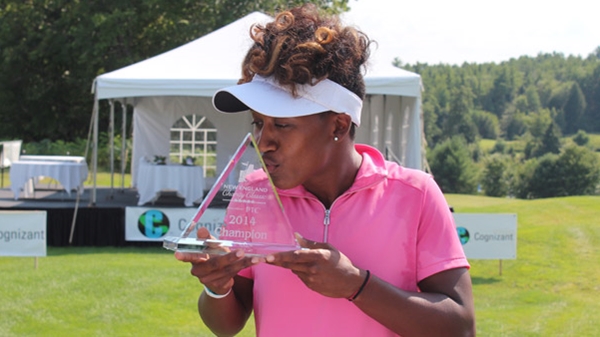 GOFFSTOWN, N.H. –  Sadena Parks fired a 5-under 67 and defeated fellow Big Break Florida contestant Jackie Stoelting on the second playoff hole to win her second event in three weeks at the New England Charity Classic presented by PTC on Sunday.

“It’s very exciting, I knew I had one more win under my belt,” said Parks, who won the SEFCU Championship at Capital Hills two weeks ago in Albany.  “Playing against Jackie was really, really hard, but we both put in a good fight and I can’t wait to see her on the LPGA Tour with me next year.”

Parks, who birdied five holes on the back nine, still had work to do on the 18th hole to force a playoff.  She stood at 7-under, one back of Stoelting, who finished a 6-under 66 and was 8-under about an hour prior.

“I hit my drive right into the bunker and didn’t think I had a shot into the green.  I knew if I hit a punch 4-iron fade I could get it out and leave myself a little short.  It happened to roll on the green, which was awesome.  I left my third putt (eagle putt for the lead) a little short.”

Parks needed to make an 8-foot putt to force the playoff.

“I drained the putt, it was clutch. I think I threw a strong fist pump in there somewhere.”

Prior to the first playoff hole beginning, Stoelting and Parks, who are good friends from their days on Golf Channel, exchanged a friendly fist-pound to say good luck.

Parks and Stoelting both made birdie on the first playoff hole, which was the par-5 18th hole.  The two proceeded to the par-4 17th hole to play the second playoff hole.  Both players missed their birdie putts and Parks tapped in for par.  Stoelting had a longer look at par and lipped out.

Parks moved from sixth to third on the Volvik Race for the Card money list with her $15,000 winner’s check.  The 24-year-old has now accumulated $51,615 in 13 events played.  She has made $43,596 in her last five events, which includes two wins and a solo second place finish.

“I don’t want to say that I have my LPGA Tour card yet, but it’s looking pretty good right now.”

With four events left in the season, Parks has all but solidified a spot in the top-10.

“Ever since I was nine years old, the LPGA Tour was my goal and it has been a long journey and now I am almost there.”

Parks becomes the third two-time winner on the Symetra Tour this year.  Min Seo Kwak, who ranks first on the Volvik Race for the Card money list and Marissa Steen, who is second on the money list, are the other two-time winners.

Stoelting earned her 16th career top-10 finish on the Symetra Tour and her fifth this season to add $9,007 to her total earnings.  Stoelting jumped from seventh to sixth on the money list at $44,787.

The 28-year-old from Vero Beach, Florida birdied five of nine holes on the back nine including the 18th to get to 8-under.

Lacey Agnew and Lindy Duncan finished in a tie for third at 7-under 209.  Duncan went from 16th to tenth on the Volvik Race for the Card money list.

Samantha Richdale finished as top Canadian, tying for eighth at 5-under 211.