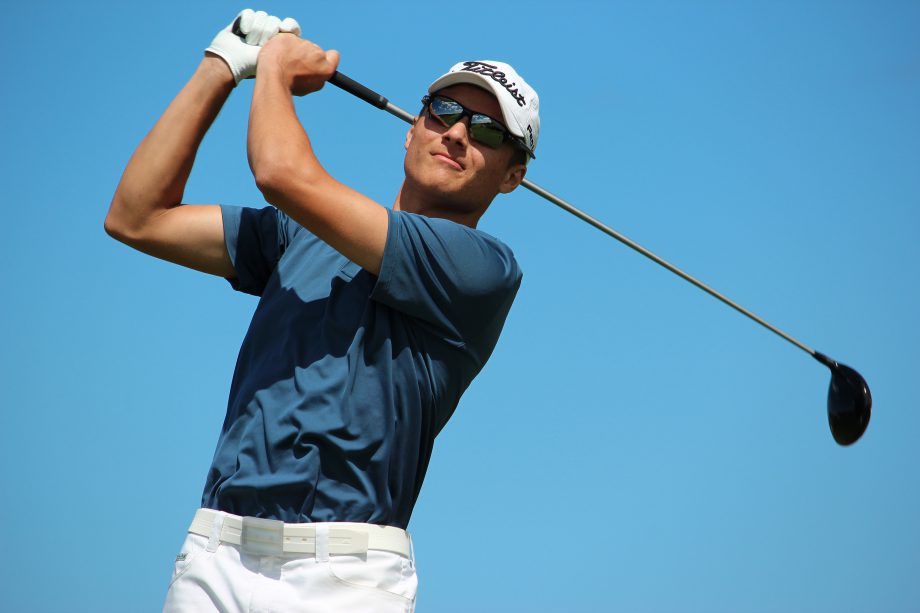 JOHN’S, N.L. – The unpredictable weather conditions characteristic of the Newfoundland golf experience welcomed competitors to the first round of the Canadian Junior Boys Championship. Sam Meek opened with a 6-under 66 showing at Clovelly to sit atop the leaderboard.

The native of Peterborough, Ont., began his round by birdieing No. 10. He would go on to collect nine more birdies on the day, including four back-to-back pairs to claim the early lead.

“It was really good,” said Meek when asked about his round. “I struck the ball really well. I was able to make 10 birdies today, so that always helps your cause. Just closing out the round was probably my main focus once I got to the back nine. I had a few hiccups on the back, but I was able to keep it intact for a good round.”

Beaming sunshine and clear skies gave way to chilly gusts and cloud cover as the day progressed. “Early on in the round, the conditions were very score-able,” explained Meek. “For our front nine, there was no wind, it was sunny, then all of a sudden, we were standing on the eighth tee and we all said to each other, ‘it just got really cold’ and the wind picked up tremendously. So you definitely had to change your game plan accordingly.”

Meek, who finished T35 in 2015 at Summerlea Golf & Country Club in Vaudreuil-Dorion, Que., stressed the need to remain focused in the coming days.

“A four-day tournament is long, it’s not a sprint. You’ve got to stay patient with it. When you get the opportunity to make your birdies, you have to make them and just hold on when the weather gets tough.”

Max Sekulic carded a 68 and is two shots back of the lead. The Rycroft, Alta., native began the day on the back nine and collected a string of three birdies on holes 12 to 14, before registering a bogey-free 2-under 34 across the second half of his round. Fellow Albertan Brendan MacDougall of Calgary sits third following a 3-under 69 performance.

Team Alberta holds a seven-stroke advantage in the inter-provincial team competition. MacDougall’s 69 and Springbrook, Alta., native Chandler McDowell’s 71 gives the team a total of 4-under 140. Matt Bean of Canmore completes the contingent from the prairie province.

Sitting atop the Juvenile division is Thomas Critch of Cedar Park, Texas. The 16-year-old notched five birdies and sits T4 in the overall competition at 2-under. One stroke off the lead in the 16-and-under division is Chandler McDowell.

In addition to the title of Canadian Junior Boys champion, the winner will receive an exemption into the 2016 Canadian Men’s Amateur Championship. The competition will be co-hosted by The Royal Ottawa Golf Club and Eagle Creek Golf Club from August 8 to 11.

The second round of the Canadian Junior Boys Championship will begin with groups teeing off Nos. 1 and 10 at 7:30 a.m. NST. The afternoon wave of competitors will begin their rounds at 12:30 p.m. NST.