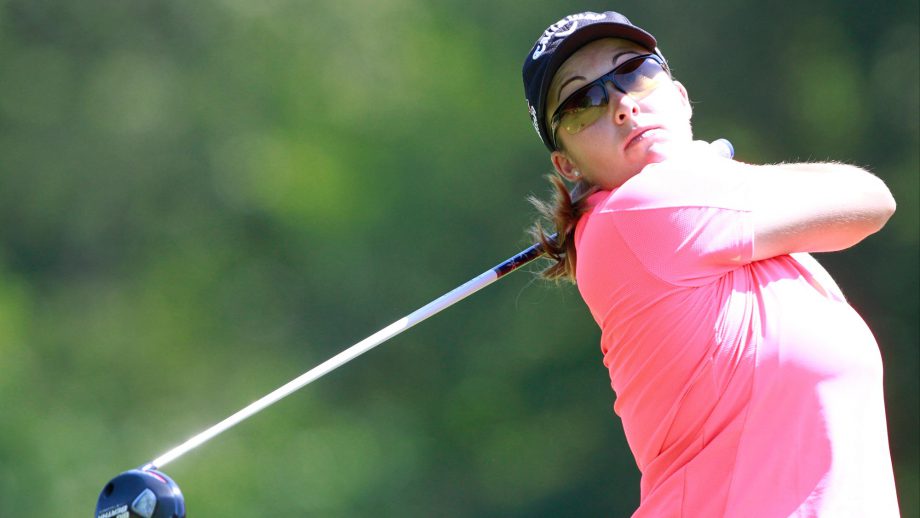 ROCHESTER, N.Y. – The spotlight never seems to phase Madelene Sagstrom (Enkoping, Sweden), who has been No. 1 on the Symetra Tour’s money list since April 18 when she won the Chico’s Patty Berg Memorial. She opened the Danielle Downey Credit Union Classic with seven birdies and a 5-under, 67 to grab the 18-hole lead at Brook-Lea Country Club on Thursday. Allie White (Lancaster, Ohio) and Ally McDonald (Fulton, Ms.) are tied for second at 4-under, 68.

A total of 34 players finished under-par and 52 are even-par or better. Quebec native Sara-Maude Juneau shot 3-under 69 for a share of fourth after the first round of play.

Sagstrom, who has two wins and seven top five finishes and has already shattered the single-season earnings record with $114,157 (previous mark was $94,578) ran off a flurry of birdies on the back nine to get to 6-under after a 15-footer on 17. She made bogey on 18, but was still very pleased with her day.

“I didn’t really miss anything, I struck the ball really well,” said Sagstrom. “I kept the ball really straight all day and I had some putts roll in during the beginning and the end. I also reached 10 and 11 and made birdies which really helped out.”

Sagstrom, who leads the Tour in driving distance (278.607), took full advantage of her length off the tee.

“I like the short par-5 holes,” said Sagstrom with a wide smile. “It definitely gives me an advantage hitting it far.”

Sagstrom won her second event at the Self Regional Healthcare Foundation Women’s Health Classic on May 8. She has come close to a third win, but hasn’t earned the “Battlefield Promotion” to the LPGA yet. Her focused attitude has not waivered even after getting a taste of the biggest stage last week in the U.S. Women’s Open.

“I’m just concerned about working on myself and focusing on trying to get better,” explained Sagstrom. “I can’t focus on a win because we have 143 other girls out here trying to win and I can’t control what they do.”

Sagstrom, 23, finished T46 in her first ever LPGA event or major last week.

“I learned a lot out there including not getting frustrated at things you can’t control because I gave some shots away,” said Sagstrom, who was put on the clock early. “It brings me back to reacting the same way after every shot and today I was doing that and it brings me back to the beginning of the season.”

Sagstrom has the first-round lead for the third time this season.

17-YEAR-OLD NELLY KORDA IS 2 BACK: Nelly Korda (Bradenton, Fla.) remembers coming to Rochester to watch her sister (Jessica) play in the 2014 LPGA major. More than the golf, she loved the visits to Wegmans. Korda also played in the AJGA Rolex Junior Girls’ event at Country Club of Rochester in 2015.

“I drive by the hotel and go to the Wegmans we went to and I’m always thinking ‘oh, I miss you’” said Korda, after her 3-under 69.

“I hit a lot of greens on my front nine and rolled a couple putts in,” said Korda, who connected on 12 of 14 fairways and 12 of 18 greens in regulation. “I struggled on the back nine hitting greens, but I was able to get up-and-down every time which is great.”

“I feel really good out here, I really like the golf course,” said Korda. “It definitely suits my game.”

“It definitely was a confidence booster,” said Korda. “However, it is a new week, new tournament and new golf course so you kind of start fresh.”

Korda currently ranks 47th on the Volvik Race for the Card money list. Her best finish is a tie for fourth at the Four Winds Invitational.

Jessica Korda finished T40 in 2014 in Rochester. Surprisingly, it is her best finish in town.

NEW PUTTER FOR MCDONALD AND A 4-UNDER: Ally McDonald (Fulton, Ms.) has had a very strong rookie season on Tour. She ranks fifth on the Volvik Race for the Card money list, but one thing that has been nagging her all year is her putting. She ranks 72nd on Tour in putting average (30.69). In a way, she debunks the saying “drive for show, putt for dough” as she has nine top 25 finishes in ten starts and three top 10’s.

“I just don’t feel like my putting statistics are where I want them to be so I changed to a super stroke grip and the shaft is a little different to help with my alignment,” said McDonald. “My coach was working with me and I just didn’t feel like I was aiming the ball very well, which is obviously important. I took a leap of faith and put a new putter in and I need to aim the ball better.”

McDonald attempted 28 putts on Thursday and made just one bogey. She carded a 4-under, 68 and is in a tie for second.

“I feel comfortable and it is not a huge change because I putted with a putter similar,” said McDonald. “I just feel like my driving stats are pretty good, greens in regulation, scoring is all good, but my putting numbers are not where I feel they should be.”

McDonald, who prides herself on her ball striking, feels that Brook-Lea suits her game because of some of the longer par-4 holes.

“There are several holes that are over 400 yards which plays to my advantage,” said McDonald. “You have to be smart too. On 18, there is a false front so you have to know where to hit it to avoid those.”

SHEILS GIVES HUGE PROPS TO TOURNAMENT ORGANIZERS: Madeleine Sheils (Boise, Idaho) has been a major ambassador for the Danielle Downey Credit Union Classic. She has come up for multiple media days and has always been supportive of Mike Vadala led ventures.

On Thursday, Sheils carded a 69 and said she’d be a “great champion for the tournament in Rochester” and she’s right.

“Nancy Lopez was here the last couple days and it is just so impressive and speaks to how great a golf town Rochester is,” said Sheils, who won in 2015 at the FireKeepers Casino Hotel Championship, which is next week. “Mike Vadala is probably the biggest supporter the Symetra Tour has outside of its own staff. I’m so happy to play well in front of a great support system and a town that appreciates great women’s golf.”

Sheils had the best stretch of her golf career. She made four birdies in a row from holes six through nine and then made an eagle on ten.

“It was my best stretch of all-time, I’ve made five birdies in a row, but never four birdies and an eagle,” said Sheils. “6-under in five holes is a personal record so I was pretty pumped about that.”

Sheils, who has a running eagle bet with a former college teammate at Nebraska, was even more jazzed about the eagle.

“It was filthy, hybrid off the tee and 3-wood to 8-feet and rolled it in so pretty sweet,” said Sheils. “I have a season bet with a friend and every eagle is worth $25 so every time I am on a par-5, I want to make an eagle.”