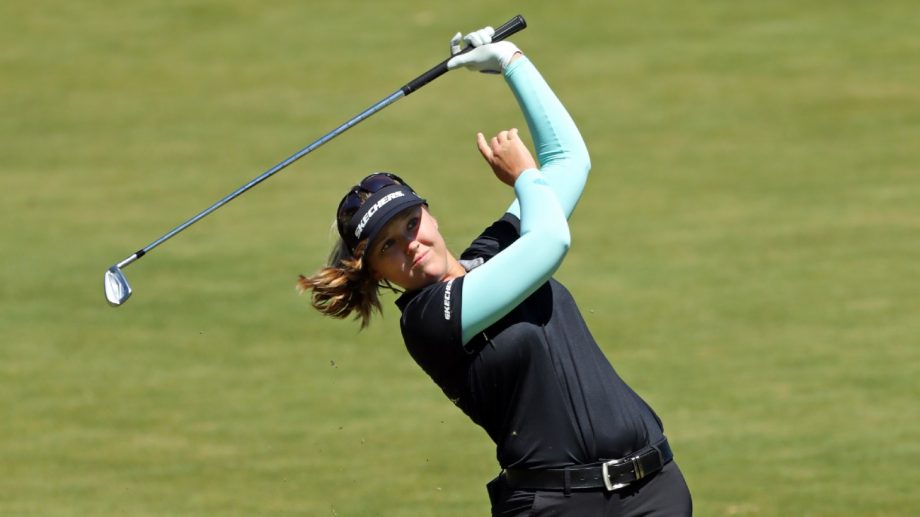 WILLIAMSBURG, Va. – Sarah Kemp shot a 4-under 67 on Friday at firm and fast Kingsmill Resort to take a one-stroke lead into the weekend in the LPGA Tour’s Pure Silk Championship.

“This golf course is made for me because I feel like I’m not long and I have a lot the wedges in, so I can’t imagine it being an advantage for the long hitters and I’m not a bomber,” Kemp said. “If I just hit it down the fairway, it’s firm and fast and they’re rolling out and I’ve had a lot of wedge shots. ”

Kemp rebounded from a bogey on the par-4 fourth her 13th hole of the day on the River Course with birdies on the par-5 seventh and par-4 eighth, holing a 20-footer on No. 8 to tie Stacy Lewis for the lead at 6 under and finishing with a par on No. 9.

The 35-year-old Australian is winless in her 14-season LPGA Tour career.

“I worked really hard. I was annoyed because I had hit the ball great for a couple years and I just didn’t convert the opportunities.”

Lewis scrambled for a closing bogey on the par-4 18th in a 69, dropping only one shot after driving into the water and having to re-tee. She was tied for second with Jessica Korda and Ana Belac.

“I’ve been working on my driver and it’s been really good this week up until this point,” Lewis said. “So, kind of just told myself to forget about it because I know I’m hitting it better than that, and hit a great second drive. Hit 8-iron in there to about probably 18 feet, and then just told my caddie when I made that putt, `That’s what I do. Just keep grinding.”’

The 35-year-old Lewis has 13 LPGA Tour titles, the last in the 2020 Ladies Scottish Open also in firm and fast conditions.

“I love it,” Lewis said. “You have to think about how far your drive rolls out, which bounce you’re going to get in the fairways. It’s thinking golf is a better way to put it. I love it playing like this. I mean, when it’s lush and green it looks great on TV, but I like playing this kind of golf better.”

“I really wanted to go for it in two, but they put the tee so far back with how firm it is there was no reason to even try to take on that pin,” Korda said about the 15th. “So I laid up and Kyle (caddie Morrison) and I were like, `It’s just a hard half-shot.? It landed exactly where we wanted and it and turned straight into the hole. I was like, `Sick!? So unexpected, but very welcome.”

The winner of the season-opening Diamond Resorts Tournament of Champions, she also had four birdies and four bogeys on the course playing much firmer and faster than she expected.

“I honestly wasn’t prepared for this,” Korda said. “This golf course is always super pure, overseeded, soft, not what we are playing right now. It’s actually really tough to gauge wedge shots because the ground is so firm that it’s just bouncing off of it. I made a couple of mistakes with some wedges in my hand, but it wasn’t like it was a bad shot or anything.” Belac is making her second tour start of the year and fourth overall. The 24-year-old player from Slovenia shot 67, playing in the last group of the day off the first tee. She led Duke to the 2019 NCAA team title and won last year on the Symetra Tour.

First-round leader Wei-Ling Hsu followed her opening 66 with a 72 to fall two strokes back at 4 under in a group with third-ranked Sei Young Kim (71), Moriya Jutanugarn (67), Haeji Kang (68) and Wichanee Meechai (68),

Canadian Brooke Henderson had back-to-back birdies before bogeying the 17th and 18th holes and finished the second round with a 1-under 70. The native of Smiths Falls, Ont., sat four strokes back of Kemp, tied for 14th spot.

Hamilton’s Alena Sharp ended the day in 68th place with a 2-over 73.

Jaclyn Lee of Calgary and Quebec City’s Anne-Catherine Tanguay did not make the cut.

Ariya Jutanugarn, coming off a victory two weeks ago in her home LPGA Tour event in Thailand, missed the cut with rounds of 70 and 77. She won at Kingsmill in 2016 and 2018.

Paula Creamer also failed to advance to the weekend, shooting 76-74 in her first LPGA Tour start since tying for 63rd in the BMW Ladies Championship in October 2019. Coming off wrist and thumb injuries, she also has an exemption into the U.S. Women’s Open in two weeks.