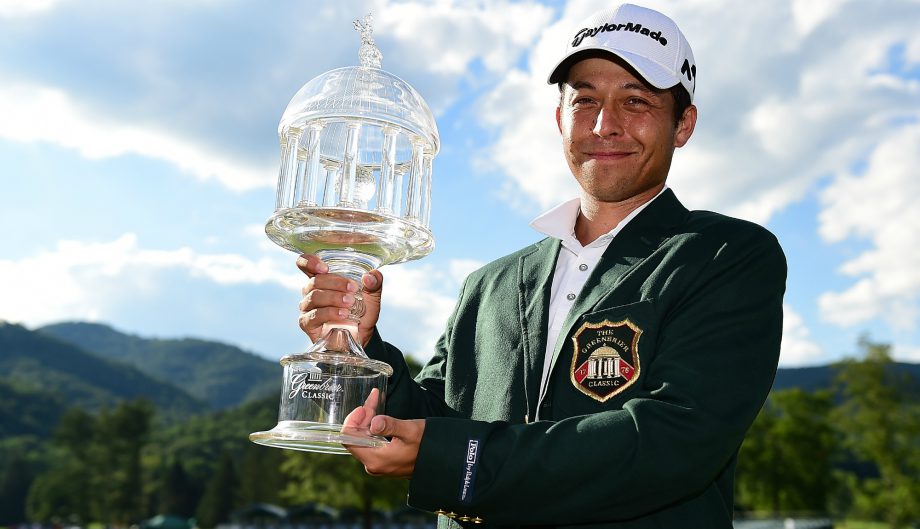 A strong finish in the U.S. Open late month helped prepare Xander Schauffele for the nerve-racking grind of chasing a title on the PGA Tour.

The rookie made a 3-foot birdie putt on the final hole Sunday to win The Greenbrier Classic by a stroke over Robert Streb for his first tour victory.

Schauffele closed with a 3-under 67 and finished at 14-under 266 to cap a daylong duel with Streb and third-round leader Sebastian Munoz.

The 23-year-old Schauffele, who took up golf after giving up soccer because his coaches wanted him to switch from offence to defence, tied for fifth in his first U.S. Open at Erin Hills.

“The U.S. Open was a huge moment in my career,” Schauffele said. “It was one of the biggest stages, and for me to be calm and collected throughout the week and just kind of hang on and tie for fifth was huge for me mentally. It kind of gave me the confidence and allowed me to play to win this week.”

Watching fellow youngster Jon Rahm of Spain win the Irish Open earlier Sunday also served as motivation for Schauffele, who shot from 94th to 27th in the FedEx Cup standings.

“Everybody knows I’m a late bloomer,” Schauffele said. “To jump into the top 30 is something special for me.”

Schauffele, Streb, Munoz and Lovemark earned spots in the British Open in two weeks. The leading four players not already exempt from the top-12 finishers qualified. Russell Henley was the only player among the top 10 finishers who already was in.

Abbotsford, B.C., native Nick Taylor was the top Canadian finishing at 9 under par in a tie for ninth. Brantford’s David Hearn was T14 at 8 under. Mackenzie Hughes (Dundas, Ont.) and Graham DeLaet (Weyburn, Sask.) were T20 at 6 under par.

Schauffele also punched a ticket to this year’s PGA Championship and next year’s Masters. He already had a spot in the 2018 U.S. Open for last month’s performance.

He’s the third rookie to earn their first tour victory in West Virginia and the fourth overall. The others were former U.S. Amateur champion Danny Lee in 2015 and Scott Stallings in 2011, along with Ted Potter Jr. in 2013.

It was another close finish in a tournament that narrowly avoided its fourth playoff since debuting in 2010.

Munoz, Streb and Schauffele traded the lead all day with each having their share of troubles.

As Schauffele reached the 161-yard 18th with a pitching wedge, Munoz and Streb heard the crowd’s roar from the par-5 17th green and both missed birdie putts.

Streb then found the left rough on 18 and his chip that would have forced a playoff came up short. Munoz needed to ace the 18th to tie it, but settled for par.

Munoz couldn’t become the first-to-wire winner of the tournament, which no third-round leader has ever won. The rookie also led the St. Jude Classic at the halfway point last month, but tied for 60th. Sunday marked his first top-10 finish.

Munoz’s putter was his strength in the first three rounds and his downfall Sunday. The 24-year-old Colombian made four bogeys on the front nine, including a pair of three-putts.

Streb had his second straight narrow miss in the tournament. He lost in a four-man playoff in 2015.

Streb retook a share of the lead with Munoz with a 32-foot birdie putt at No. 14, only to witness Schauffele pull it out in the end.

“I heard the racket. You could see it,” Streb said. “I had my chances and just didn’t do very well with them.”

Lovemark doubled-bogeyed the first hole to fall five shots back and made three birdies over his next 12 holes but never held the lead. He had his fourth top-10 finish this season.

At age 53, Davis Love III fell short in his bid to become the oldest-ever winner on tour. Love started his round four strokes back, bogeyed the first two holes and was never a threat. He shot 75 and tied for 29th at 5 under.