Scheffler has the lead and the back nine awaits 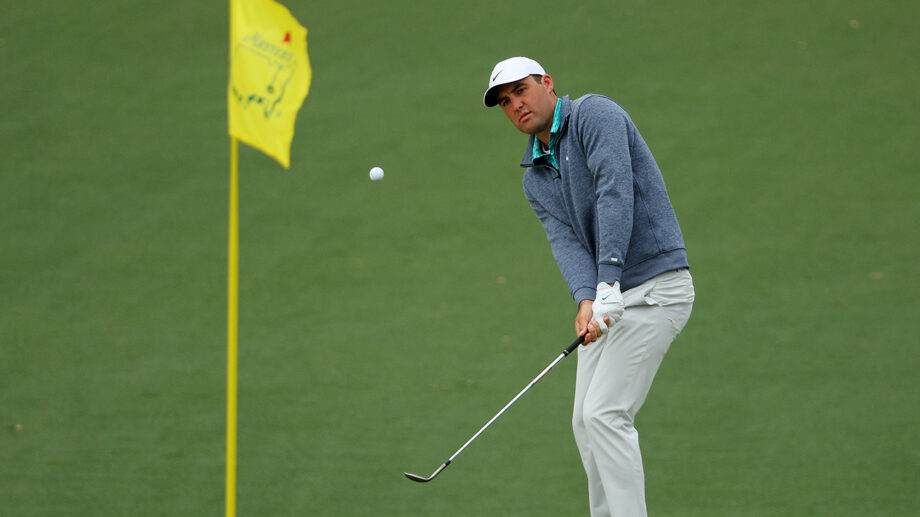 AUGUSTA, GEORGIA - APRIL 09: Scottie Scheffler plays his shot on the second hole during the third round of the Masters at Augusta National Golf Club on April 09, 2022 in Augusta, Georgia. (Photo by Andrew Redington/Getty Images)
Associated Press

AUGUSTA, Ga. – Tiger Woods still held out a faint ray of hope as he peered into the future after his second round and reminded everyone that the old adage is true – the Masters really doesn’t start until the back nine on Sunday.

Unfortunately for Woods, his Masters chances ended on a Saturday when his putter went cold and he shot his worst score ever in a tournament he’s won five times. Woods will tee off in the final round with no shot of winning, though just making an appearance this week might have been his biggest win of all.

With Scottie Scheffler, the hottest player in golf, carrying a three-shot lead into the final round, the question now becomes this: Will the back nine even matter on Sunday?

History suggests it will, largely because the ghosts of Masters past tend to always show up at the wrong time. The tournament is littered with guys who have failed on the final nine, with collapses so great some never really recovered.

If Scheffler needed any reminder, he found it about the same time he found his Titleist buried deep under a tree on the 18th hole Saturday.

At least until the back nine on Sunday, of course. Then all bets are off.

Just ask Cameron Smith, the young Australian he’ll be playing alongside who can’t wait to get the match going.

On the flip side, you can find plenty of trouble if you’re not. Rory McIlroy kicked away a Masters he was leading in 2011 when he yanked his tee shot on No. 10 into the cabins left of the trees and made triple bogey. He went on to four-putt the 12th hole and shoot an 80 that still seems to haunt him after all these years.

Jordan Spieth had a five-shot lead entering the back nine in 2016 and seemed on his way to a second straight green jacket before opening with consecutive bogeys and then hitting two balls into Rae’s creek on his way to a quadruple bogey on No. 12 that opened the way for little known Englishman Danny Willett to win.

Even Arnold Palmer wasn’t exempt from back nine misery, making double bogey on the 18th hole to lose the lead and the tournament to Gary Player in 1961.

And it doesn’t take a golf historian to remember Greg Norman’s epic meltdown in 1996 that was so bad he refused to talk about it for years.

“I am a winner at life, I’m not a loser,” Norman said afterward. “And I’ll wake up tomorrow. Still breathing I hope.”

What looked like a runaway for the world’s No. 1 player most of the day Saturday became more of a two-man race when Smith shot the best round of the day, a 4-under 68, then waited to see how high of a mountain he still needed to climb. Scheffler responded with a good score of his own on a cold and windy day, but he won’t go into Sunday with the same five-shot lead he began the weekend with.

His plan for the evening at home before the biggest day of his 25-year-old life? Watching some old episodes of “The Office” with his wife, laughing a bit and having a good dinner.

Nothing complicated, but so far it’s worked. Scheffler won for the first time in Phoenix this year and has won twice since, giving him a three wins in just his last five starts.

“Being in contention is what’s fun, so being in the lead is fun,” he said. “When I’m in the lead, I’m trying to stay in the lead and not really overthink things; just go out there and play golf.”

That might be good enough to give Scheffler the green jacket and cap a remarkable streak that golf hasn’t seen in a long time. It might be enough to make things easier as he stands on the tenth tee with all the history that surrounds it.

Corey Conners leads the way for the Canadians in a tie for sixth at 1 under par, eight strokes back of Scheffler.

Tune in Sunday to find out on the back nine, where the Masters really begins.