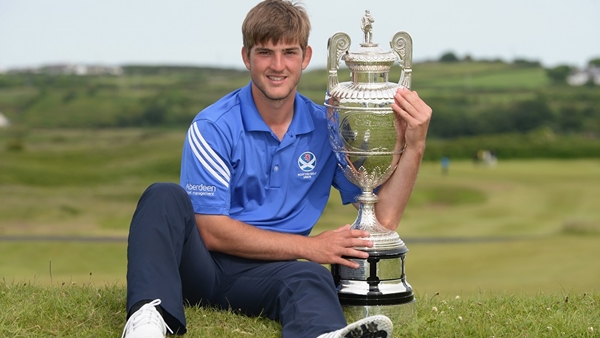 Neil clinched the match with a half on the par 5 35th hole for a 2&1 victory in the 36-hole final. The 18-year-old becames the first Scot to win the Amateur Championship since Stuart Wilson at St Andrews in 2004.

Neil’s form on the back nine and coolness under pressure helped him clinch the title and earned him a place in next month’s Open Championship at Royal Liverpool, the 2015 US Open at Chambers Bay and a traditional invitation to the Masters.

“To play in front of big crowds like this is incredible,” he said. “I would like to thank my caddie Michael Stewart. This win is not just for me it is for everyone that has helped me. I am so proud that my name will be added to the list of past winners.

“It means a lot to me to have the chance to compete with Major champions in The Open.  It will be fantastic it will be a strong test and it will be good to see how my game copes.

“Zander is a brilliant guy and we have been good friends for the last six months. He is a very strong, determined player. He didn’t make it easy for me. He’s got a lot of game and he is a really good talent.”

Despite his disappointment, the 19-year-old Lombard, who was hoping to become only the second South African winner after Bobby Cole in 1966, was delighted to have reached the final and has earned a place in Final Qualifying for The Open Championship.

“I’m very pleased with my achievement,” he said. “My golf’s been good all week. We both played really solid today and I have to say thumbs up to Bradley, he’s an awesome golfer with a lot of talent. We are pretty good friends and it is always nice having really good company on the golf course.

“We both just made a lot of pars and played really solid golf without making any mistakes. I had a few errant shots around the turn of the afternoon round but all in all I am really happy with my performance and my golf and am really looking forward to the rest of my career.”

The final was all square after a closely fought 18 holes in the morning in which both players recorded level par rounds of 70, with Lombard playing the steadier golf. The South African hit 16 of 18 greens in the morning round and had six birdie putts he failed to convert. Neil only managed to find eight greens in regulation but his short game kept him hard on Lombard’s heels.

After the opening exchanges Lombard remained one hole up until the 12th when he missed his first green of the day and failed to get up and down to take the match back to all square. Neil went ahead at the 16th when Lombard bunkered his tee shot and couldn’t advance the ball to the green. Neil meanwhile holed a 10 foot birdie putt. The match went back all square on the par-5, 17th when Neil recorded a bogey after finding the left rough off the tee and Lombard managed a fine birdie.

The afternoon round began the way the morning session ended for Lombard, with the South African failing to take advantage of birdie chances. He watched with dismay as a 15 foot putt at the 19th just curled away from the hole. He missed another birdie putt at the par-3 21st hole, when his 18 foot attempt just shaved the left edge of the hole.

In between, the Pretoria native hit a poor drive at the par-5, 20th hole to find the left rough. His second shot didn’t clear the rough and he lost the hole when Neil made a birdie. Neil was much more composed at the beginning of the afternoon session and he hit seven of the first nine greens.

Lombard got the match back to all square with a birdie three at the 25th when he holed a 20 foot birdie putt. The pair traded holes at the 26th and 27th holes. A wild tee shot into the left rough on the 26th meant a bogey and back to one down for Lombard. He quickly got that back, though, when he holed a six foot putt for birdie to take the match to the 28th all-square.

Neil moved ahead on the back nine, however, when Lombard bogeyed the par 4 28th and the par 3 29th. When Neil won the 31st hole with a bogey five, after Lombard lost his ball with his drive, and the next with a par three, the situation looked ominous for Lombard as he fell four behind. The South African showed his resilience to win the next two holes with birdie threes, including holing from off the green from 20 feet on the 34th hole, but when both players halved in par at the penultimate hole the match was over. Neil had two putts from ten feet to seal his win.

“When he bogeyed 10 and 11, I think that really swung things in my favour,” added Neil. “I went two up and it was going to be tough for him to get back from that. When he lost a ball down 13, I went three up with five to go so it is going to be tough for anyone, especially when I then went four up with four to go. I really wanted it to be over but I’m just glad it is done now.”

Neil, who is currently ranked 38th in the World Amateur Golf RankingTM, has followed in the footsteps of players such as Matteo Manassero, Sergio Garcia and Mikko Ilonen in winning the Amateur Championship and can now look forward to playing in The Open at Hoylake next month.

For the full scoring details from the Final visit, click here.