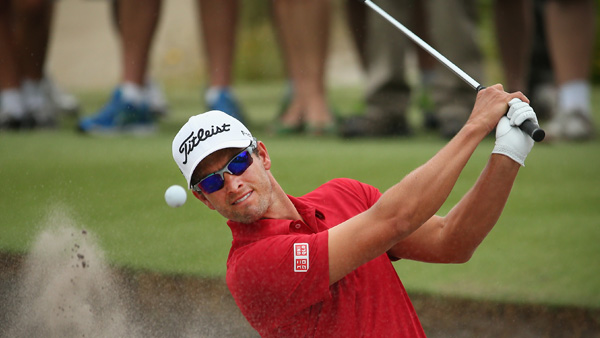 MELBOURNE, Australia — Adam Scott moved in the right direction Saturday at the Australian Masters, shooting a 1-under 71 to pull to within four strokes of the lead as he attempts to win the tournament for the third consecutive year.

Scott got some help from gusty winds that affected the last few groups. He trailed by six when he finished, but an hour later, Paul Spargo, playing in the final group, was the leader after a 71 and a 54-hole total of 8-under 208.

That was one stroke better than second-round leader Michael Wright, who bogeyed four holes on the back nine for a 74 and after he and fellow Australian Spargo were told they were on the clock for slow play.

“I’m happy with the result considering the conditions, I made some good shots coming in,” said Spargo. “Who knows what we’ll get weather-wise tomorrow.”

The forecast for Sunday was for lighter winds from the south, just the opposite of the strong northerlies that buffeted Metropolitan Golf Course on Saturday.

Three Australians were tied for third, two strokes behind – 18-year-old amateur Lucas Herbert, who had the round of the day with a 65, Nick Cullen (66) and James Nitties (67).

“I was quite fortunate to get out before the weather really hit,” said Herbert, whose 7-under came in mostly calm morning conditions. “That wind was really tough on the last four holes.”

Geoff Ogilvy, the 2006 U.S. Open champion, shot 71 and was in a group three shots behind and tied for sixth.

Scott, tied for eighth with seven others, shot 39 on the front nine after three bogeys and a birdie, but made a run on the back with four birdies in eight holes before making bogey on 18. Twice he needed two shots to get out of bunkers.

“I hung in there, I felt I swung the club today better than before, and that’s something I need to keep going for tomorrow,” Scott said. “You never know, I might be within shouting distance.

“Anyone sitting in my position is going out with no pressure. Posting a number is a big thing in a golf tournament with some tough finishing holes here.”

Scott will go up against world No. 1 Rory McIlory at next week’s Australian Open in Sydney, where the Northern Irishman is the defending champion.

Last year at Royal Sydney, McIlroy birdied the 18th hole to relegate Scott to second and prevent the Australian from capturing all three of his country’s majors – the PGA, Masters and Open.

Canadian Riley Wheeldon shot an 81 on Saturday and dropped back into a tie for 62nd at +6.

Americans Zac Blair (69) and Boo Weekley (70) were at 2-under, six behind Spargo. Another American, Kyle Stanley, shot 73 and was another stroke back.