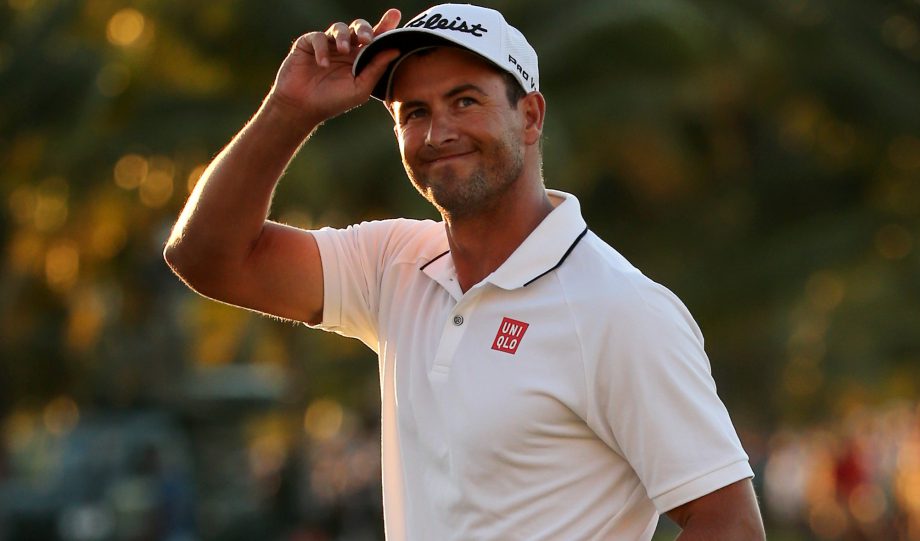 DORAL, Fla. –  Adam Scott faced a daunting challenge, a six-shot deficit with 13 holes remaining on a course that was playing tougher than it had at any point this week.

And after overcoming that, he needed to survive two brushes with big trouble on the final hole to finish the job.

Scott won for the second straight week, shooting a final-round 69 to win the Cadillac Championship by one shot over Bubba Watson. It’s the second win for Scott in a World Golf Championships event, his 13th career win on the PGA Tour and he now hasn’t finished lower than second in any of his last three starts.

“Everything fell the right way for me today,” Scott said.

With course owner Donald Trump popping in on Sunday, arriving by helicopter and greeting fans as he drove around in a cart, there was plenty of drama away from the fairways and greens.

Scott ensured there was a ton on the grass as well, after two double-bogeys in a three-hole span on the front side seemed to send his round into a tailspin. That is, until he got hot at just the right time with birdies on six of his next nine holes after the second double.

“It was such a challenge out there today,” Scott said. “I knew if I could just get a couple before the turn, maybe I’ll have a chance.”

It’s anyone’s guess if Scott will get a chance to defend the title at Doral in 2017. General Motors’ sponsorship agreement with the event ends this week and with no sponsor, there’s no tournament.

“Our hope is that the future could allow us to stay here and continue to build the tournament,” PGA Tour Commissioner Tim Finchem said Sunday afternoon, meeting with reporters before sitting down privately with Trump to talk about the tournament’s future. “But we’ll have more to say about that after we do a full evaluation of our performance this year.”

Count Watson, who has been second or third at Doral four times in the last five years, among those who want Doral to stay on the schedule, as it has been since 1962.

“If they move it I’ll be sad,” Watson said, “because I’m pretty good around this place.”

That he is, but Scott – despite walking a tightrope the last three holes – was a bit better.

He saved par on the par-4 16th, after his drive went over the green and nestled in a bunker. His second shot was dreadful, finding a patch of greenside rough. From there he popped a chip 8 feet past the hole, then made the putt for par.

The trouble only got worse from there.

His tee ball on 17 found a bunker while Watson, on the green ahead, made birdie to get within one. Scott eventually saved par, headed to the final hole with that one-shot lead – and put his tee shot in the right rough, a skinny palm tree impeding his path to the green. So he went left, around the tree but toward the water, and that shot somehow caught enough thick grass on a sharp slope to stop before getting wet.

“I was so lucky for it to stay up inside the hazard line,” Scott said. “When you’re that lucky, you better get them up and down.”

That’s exactly what he did. Scott chipped to 6 feet, made the par putt and moments later knew the win was his.

Watson made eagle at the par-5 8th to get into real contention Sunday, but his big mistake was a bogey on the par-4 14th. He couldn’t get up-and-down from a greenside bunker, Scott made birdie on the same hole just a few minutes later, and that two-shot swing proved critical.

“I gave it a good effort,” Watson said. “What I’m working on in my head is working out. Right now, I’ve got the energy and the mind-set to play some decent golf, so very positive, very happy about the week and what took place.”