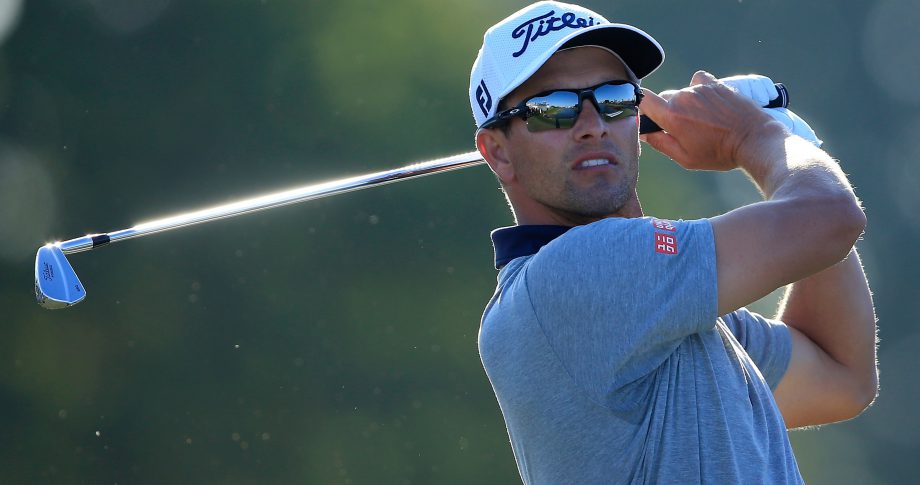 PALM BEACH GARDENS, Fla. – Adam Scott looked as though he couldn’t miss as he began to pull away Saturday in the Honda Classic.

He hit every green through 13 holes at PGA National. He made seven birdies through 14 holes. He turned a three-shot deficit at the start of the round into a three-shot lead over Sergio Garcia. No one else was closer than seven shots.

One hole changed everything.

“Just one of those ones where it’s the wrong time to make an error,” Scott said.

Make that two errors. Scott put two balls into the water on the par-3 15th and made a quadruple bogey to lose the lead. He still managed a 4-under 66 to share the lead with Garcia going into the final round.

It was the other 17 holes that left Scott so optimistic about a chance to win for the first time since May 2014.

“I’m playing great,” he said. “I have to say, I’ve played better every day this week, and it started pretty good. It’s disappointing not to have walked out of here and shot 62 or something like that. But it might be tomorrow that I can do that.”

Garcia lost the lead again with a bogey from the bunker on the 17th, but a birdie on the final hole gave him a 67 to catch Scott.

Blayne Barber had a 69 and was four shots behind.

Scott and Garcia were quick to point out that Sunday might not be a two-man race, and there was plenty of evidence to back them up.

Rickie Fowler had a one-shot lead going into the third round and was the first player at the Honda Classic to go bogey-free through the opening 36 holes. And then on Saturday, he couldn’t make a birdie. Fowler made bogey on the easiest hole at PGA National, the par-5 third, and wound up with a 74 to fall five shots behind.

Nothing went right for Jimmy Walker, starting with the first tee. Playing alongside Fowler, he was introduced as “Jimmy Fowler.” Walker had the lead with his birdie on the third hole. He didn’t make another birdie until the 18th hole, and that was to break 80. Walker was 11 shots back.

“Who can tell me that the guys that are 4 under are not going to go and play like Adam did today?” Garcia said. “We’ll see how the day goes. And then if it becomes a two-horse race on the last three or four holes, I’ll welcome that. But I will expect some of the guys behind to shoot a good number and make it tough for all of us.”

Thanks to one swing by Scott, those guys at least have a chance.

Justin Thomas opened with three straight birdies and had to settle for a 68, putting him at 4-under 206 with Fowler. Graeme McDowell had a 67 and was six shots behind at 207 along with Scott Brown and Vijay Singh (68). Singh made a double bogey on the 15th hole without hitting in the water, hitting in the bunker or hitting in the rough. His problem was the golf ball hit the putter four times from 20 feet.

Still, nothing was more shocking than Scott how quickly his fortunes turned.

The former Masters champion with one of the prettiest swings in golf was flawless. He ran off four straight birdies to close out the back nine, starting with a 50-footer on No. 6, the toughest hole of the day. Garcia’s three-putt bogey on the 13th made the deficit three shots, and he was in danger of falling too far behind.

“Obviously, if he shoots 61 the way the course was playing, the only thing you can do is just say – I want to say it in Spanish, but you’ll have to beep it,” he said with a laugh. “There’s nothing you can do. So I was just trying to make sure to stay with him again, still have a shot at tomorrow. I’d rather be where I am right now.”

Scott’s most important holes were the next two. He pulled his tee shot left, cleared the water from the rough and got up-and-down for par

“The par there was very important at the time, because it’s really stopping a severe bleed after 15,” he said.

And then he hit 6-iron to 10 feet on the 17th for birdie, regaining the lead when Garcia made bogey.

Scott last won at Colonial in 2014. Last year was his first without a victory since he was a 20-year-old rookie in 2000. Garcia ended last year with a victory in Vietnam on the Asian Tour. His last PGA Tour victory was in 2012.

“I think we’re both pretty desperate to have a win tomorrow after putting ourselves in this position,” Scott said. “So hopefully, we both play well and it’s a good show.”

Canada’s Graham DeLaet carded a 69 Saturday and is tied for 22nd at 1 over.