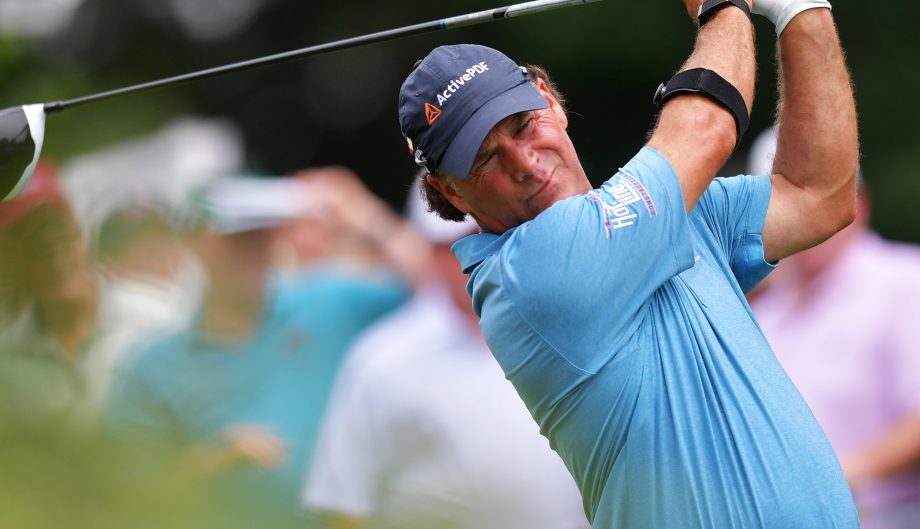 CALGARY – Scott McCarron has had his way with the par-5, 18th hole at Canyon Meadows Golf and Country Club.

McCarron eagled the final hole of the par-70, 7,086-yard course for the second straight day to move atop the Shaw Charity Classic leaderboard on Saturday.

“I’m kind of expected to make some eagles out there and that’s a hole that sets up pretty well for me,” said McCarron, who leads the PGA Tour Champions circuit with 16 eagles so far this season. “Coming up 18, it’s just a lot of fun for us to have that grandstand with all the fans up there. I’ve been lucky enough to make two long putts. Hopefully I can do it again (on Sunday).”

McCarron also had five birdies to go with one bogey for a round of 6-under 64. Through two days of action at the three-day event, McCarron’s at 13-under par and has a two-stroke lead over first-round leader Kevin Sutherland and Miguel Angel Jimenez.

“There’s some really good players and I’m going to have to put the pedal down and make a bunch of birdies,” said McCarron when asked what it will take to win his fourth event this season.

Jimenez shot 65 to move into a tie for second at 11 under with Sutherland, who followed up the 62 he shot in the first round with a 67.

Scott Dunlop and Todd Hamilton both had rounds of 66 on Saturday and are tied for fourth place overall at 10 under, just one shot ahead of Nick Faldo, Bob Estes and Jerry Kelly.

Faldo shot 64 to tie McCarron for the Saturday’s low round to move into contention, despite playing in only his fifth tournament of the year.

“I haven’t shot 64 in whatever ? a long time,” said the 60-year-old World Golf Hall of Fame member. “It was nice to feel that I could go for it. That was the goal for coming here and playing. I’ve been working on enough things that it’s just putting it to the test, so that was really great.”

McCarron counted Faldo among the group of golfers that he’ll have to fend off on Sunday.

“Then you’ve got Nick Faldo,” McCarron said. “I mean, what’s he doing? He’s supposed to be announcing somewhere, isn’t he?

“Here you’ve got a guy, one of the best players in the world during his time, hasn’t played hardly at all for years and comes out here and joins us. It’s a big boost for us to have Nick Faldo to come out and to come out and play well, I think that’s really impressive.”

Vancouver’s Stephen Ames is the top Canadian after carding a round of 66 to move him up the leaderboard and into a tie for 18th spot at 5 under with a group of six others, including 2014 Shaw Charity Classic champion Fred Couples.

“I played well, better than (Friday),” said Ames, who noted that he struggled with his ball striking during the first round. “I didn’t make as many putts as (Friday). That kind of goes with the game. It’s going very well.”

Rod Spittle of Niagara Falls, Ont., is just one shot back of Ames at 4 under after a 69. Although Victoria’s Jim Rutledge also carded a 1-under round of 69 on Saturday, he’s well back of the front runners heading into Sunday’s final round in a tie for 69th spot at 1 over.