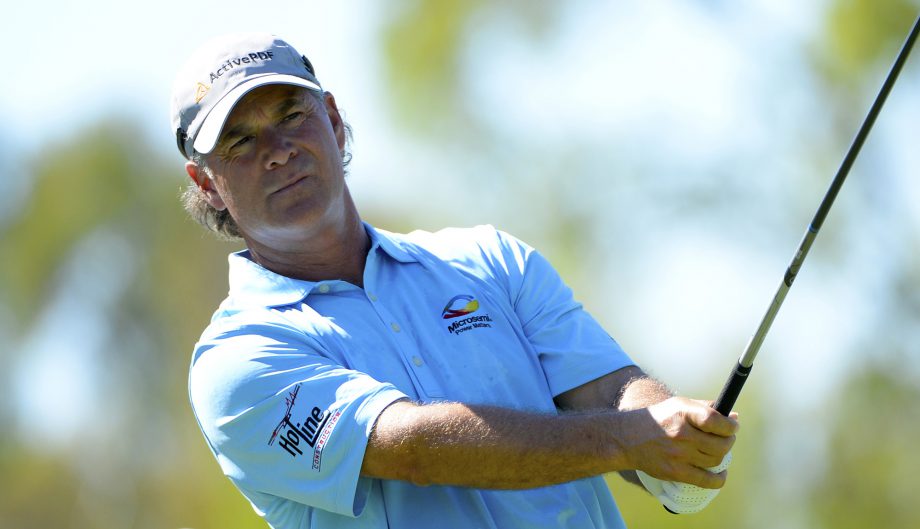 CALGARY – Scott McCarron didn’t waste any time after missing a long putt for birdie on the final hole Sunday.

In front of a large gallery of fans at the Canyon Meadows Golf and Country Club, McCarron walked right up and tapped in a short, but nerve-wracking putt, to win the 2017 Shaw Charity Classic title.

“It felt like 20 feet,” said McCarron, who held on for a one-shot victory over Miguel Angel Jimenez after shooting a 3-under 67 in the final round. “It was probably about three feet or so. It was kind of a right-centre putt. I didn’t take much time over it, because I saw it go right by and I knew exactly what I was going to do.

“I just missed a couple short ones before, so I didn’t want to even think about it too long. I set it up and made a good putt finally. It really felt good to get that done.”

McCarron had three birdies and two bogies on the front nine before draining a long putt from off the green at the par-5, 11th hole for eagle. It was the third eagle of the weekend for McCarron and the 17th of his season to lead the PGA Tour Champions circuit in that category.

McCarron then birdied the 15th hole before giving a shot back with a bogey on 16. He finished with two straight pars to end the three-day event at 16-under 194 to take home the winner’s share of $352,500 U.S.

It was the fourth PGA Tour Champions tournament victory of the season for the 52-year-old golfer from La Quinta, Calif., who earlier won titles at the Allanz Championship, the Constellation Senior Players Championship and the Dick’s Sporting Goods Open.

“Winning does not get easier,” stressed McCarron. “These guys are the best players in the world at their time and they’re still playing some great golf. I truly believe we’ve got 25 guys that can still play on the PGA Tour and compete.”

Jimenez had a chance to eagle the final hole, but he just missed his long putt and had to settle for a birdie and a round of 66 to finish in second spot by himself.

“I knew I had to hole the putt if I have any chance,” said Jimenez, while adding he wasn’t able to sink enough putts in the final round. “Scott is playing very well and holed very important putts for him and that’s the key.”

Scott Dunlap and Todd Hamilton both had rounds of 67 on Sunday to finish in a tie with first-round leader Kevin Sutherland at 13 under.

Sutherland followed up a birdie on the third hole with an eagle on the fourth to move into a tie with McCarron at 14 under before falling out of contention.

“Momentum is only as good as the next shot,” Hamilton said. “I just didn’t string together the shots today. I wasn’t able to have a lot of good birdie opportunities and I had a lot of trying to save pars most of the day.”

Although he had respectable rounds of 67 and 68 in the first two rounds, 2014 Shaw Charity Classic winner Fred Couples withdrew from the tournament on Sunday before his tee time due to ongoing back issues.

Vancouver’s Stephen Ames finished as the top Canadian in a tie for 19th spot with Kirk Triplett at 7 under after shooting a final round 68.

“I wasn’t hitting the ball great for the first two days, so I kind of did well with what I had,” Ames said. “Considering the fact I was 7 under, I think I’ll take it. I’m quite happy with the result.”

Rod Spittle, of Niagara Falls, Ont., shot his second straight round of 69 to finish the tournament in a seven-way tie for 25th at 5 under.

Victoria resident Jim Rutledge made four birdies and an eagle to get to 6 under before recording two bogies in his final four holes to shoot 66. He finished the tournament in a tie for 40th place with nine other golfers at 3 under.