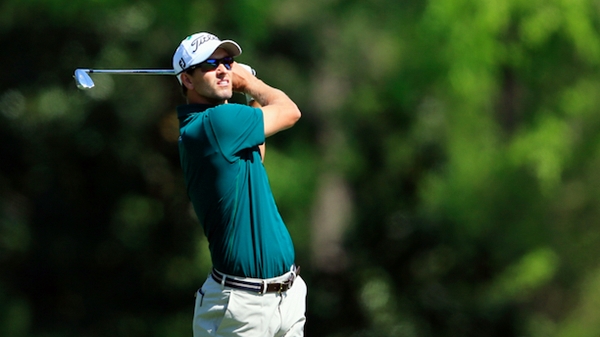 AUGUSTA, Ga. – For some, the burden of defending a championship can be overwhelming.

For Adam Scott, it was pure joy – at least for a day.

With a green jacket already in his collection, Scott felt a sense of calm that carried over to the golf course. The result: a 3-under 69 that got the laid-back Aussie off to just the kind of start he was looking for at the Masters.

Now, to keep it going for three more days.

“Having won last year, in some ways, has taken a little pressure off me,” Scott said. “I kind of felt like what was the worst than can happen? I’m still going to be a Masters champion.”

Bill Haas was leading a major for the first time, shooting a 68 Thursday that left him one stroke ahead of the last guy to win the Masters (Scott), the guy who won it two years ago (Bubba Watson), and the guy Watson beat in a playoff (Louis Oosthuizen).

On a warm, sunny morning, Marc Leishman of Australia got off to a blistering start in the second round, making three straight birdies to become the first player to get to 5 under. Oosthuizen stumbled a bit, shooting a 1-over 37 on the front side, while Watson began with five straight pars.

Scott was clearly the most compelling figure on Day 1 of a Masters marked by the absence of Tiger Woods, sitting out for the first time in his career after back surgery. Golf has been waiting for a star to take control all year, and Scott turned in a rock-solid round that was marred only by a double bogey in the middle of Amen Corner, the one time he let the significance of being a major champion get to him a bit.

A roar went up as Scott strolled from the 11th green to the 12th tee. Caught up in the moment, he promptly dumped his tee shot in Rae’s Creek, the first time that’s happened in his career.

“Getting off to a good start in a major is huge,” Scott said. “They are the hardest tournaments to kind of chase. Birdies aren’t that easy to come by usually at the majors, and if you’re six back, five back, 10 back after that first round, it’s a hard three days in front of you.”

That doesn’t bode well for Phil Mickelson, who had two 7s on his card and finished with a 76 – a staggering eight shots off the lead. Not exactly the kind of start Lefty was hoping for in pursuit of his fourth green jacket. No one has come back to win at Augusta from more than seven shots behind after the opening round.

“I was really off,” said Mickelson, who blamed his score on mental lapses rather than anything in his swing. “It was very disappointing.”

Haas, the son of the longtime PGA Tour stalwart Jay Haas, broke 70 for the first time in five Masters appearances, and he’s got his dad helping him every step of the way.

Jay and Bill are staying together in Augusta, and Jay is out on the range every day, passing on helpful hints to his son.

Haas’ performance was especially poignant, given his father played the Masters 22 times and never finished higher than a tie for third in 1995. In fact, the elder Haas never won a major championship despite a long, successful career.

Maybe his boy can take care of that little blemish.

“I think he deserves a major in his career as good as he played,” Bill Haas said. “He was working his tail off to try to win those things, and we all knew as a family that he left it all out there.”

Watson, who slipped that green jacket on Scott last year, played his first bogey-free round in a major since the 2009 U.S. Open. Oosthuizen was the only other player in the 60s – the fewest to break 70 in an opening round at the Masters since 2007, despite a brilliant spring day that made the course seem ripe for the taking. No chance, not with hole locations that were severe for an opening round and greens that got firmer by the hour.

More of the same was expected through the weekend, as temperatures continue to climb into the 80s after a brutal winter.

Mickelson and the other reigning major champions paid the price. PGA Championship winner Jason Dufner took a quadruple-bogey 9 on the 13th hole and wound up with an 80. U.S. Open champ Justin Rose shot 40 on the front and scrambled for a 76, matching Mickelson.

Haas knows better than to put too much stock into what happens on a Thursday. He was leading after the opening round in Houston last week and tied for 37th.

Only one first-round leader in the last 30 years has gone on to win the Masters.