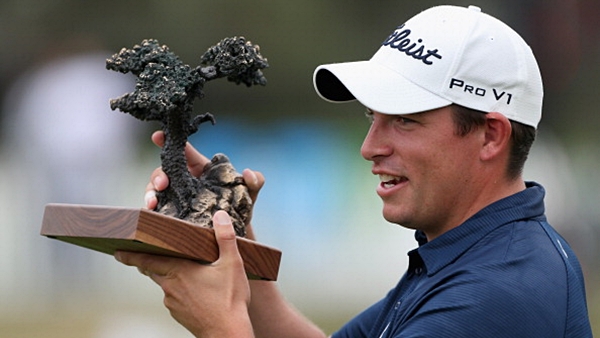 SAN DIEGO – In a tournament that was up for grabs, Scott Stallings hit a 4-iron worthy of a winner Sunday in the Farmers Insurance Open.

Stallings was in a five-way tie for the lead when he hit his second shot on the par-5 18th hole as hard as he could. It was enough to barely clear the water, and he took two putts from 40 feet for birdie and a 4-under 68 at Torrey Pines.

That was enough for a one-shot victory when no one could catch him.

It was the third career PGA Tour victory for Stallings, who earned a return trip to the Masters and should move high enough in the world ranking to qualify for the Match Play Championship next month in Arizona.

K.J. Choi had the best score of the week on the South Course with a 66 and was among those – including Saskatchewan’s Graham DeLelaet – who tied for second. The pins were set up in favourable positions for birdies, making the course play the easiest it had all week.

But that didn’t make it easy – not for Gary Woodland, Jordan Spieth, Pat Perez and so many others who squandered a good chance to win.

Woodland appeared to have the best chance to catch Stallings. He was one shot behind – with plenty of length to reach the 18th in two – until he chose fairway metal off the tee on No. 17 and hooked it into the canyon. He felt he had to make his 45-foot par putt to have any chance, and three-putted for double bogey. Woodland, who had a one-shot lead going into the final round, missed an easy birdie attempt on the 18th and closed with a 74.

“This will be hard to swallow,” Woodland said. “I felt like I kind of gave one away today.”

Marc Leishman of Australia had the last chance to force a playoff, but his drive on the 18th went well right and bounced off the cart path and a fan. He had no shot at the green in two, and his wedge for an eagle stopped a few feet to the side of the hole. His tap-in birdie gave him a 71 and a share of second.

Stallings finished at 9-under 279.

Jason Day (68) and Graham DeLaet (68) each made birdie on the last hole to tie for second. So did Perez, the San Diego native who grew up at Torrey Pines and whose father is the longtime starter on the first tee at the Farmers Insurance Open. Perez missed a 10-foot birdie chance on the 17th. He closed with a 70.

“It’s great and bad,” Perez said about his runner-up finish. “This is the one I want to win more than anything in the world, and I came up short. … I thought today would have been my day. I would like to be in that position again.”

Spieth didn’t make a birdie over the last 15 holes, and he fell back with back-to-back birdies late in the round. The 20-year-old Texan made a meaningless bogey on the last hole that only cost him a spot in the top 10. By then, his day was over. He closed with a 75.

“I just lost control of the golf ball,” Spieth said.

He also revealed that he tweaked his ankle Friday and felt it kept him from getting into the right position on his back swing.

Woodland went from a chance to win to a tie for 10th.

Deep into tournament, nearly 20 players were separated by only two shots. It was similar to when Jimmy Walker won the Sony Open two weeks ago in Honolulu, emerging from the pack with a late burst of birdies.

Stallings made six birdies over his last 11 holes, along with a pair of bogeys. Most remarkable is that he managed to hit only four fairways in the final round. But one that he did was important – the 537-yard closing hole, giving him a chance to get home in two for a birdie at worst.

He said caddie Jon Yarbrough – fired by Woodland late last year – told him in the 18th fairway, “Let’s see what you’ve got. You’ve worked your butt off.”

“I hit 4-iron as hard as I could,” Stallings said.

It was just enough to clear the water, and while it trickled off the front of the green, he could still use his putter. He lagged it up to 30 inches for a short birdie putt that turned out to be the winner.

Charley Hoffman, another San Diego native, made a hole-in-one on the third hole and closed with a 67 to tie for seventh, along with Ryo Ishikawa of Japan and Will MacKenzie, who each had a 70.

Brad Fritsch of Ottawa finished in a tie for 10th, 3 shots back.

Six players finished in the top 10 that are not in the Phoenix Open next week.

Ordinarily, a top 10 gets a player into the next open tournament. In this case, the field already is full and they only can be alternates. That list includes Justin Thomas, who was playing this week on his fourth out of seven allotted sponsor exemptions. Thomas shot 69.