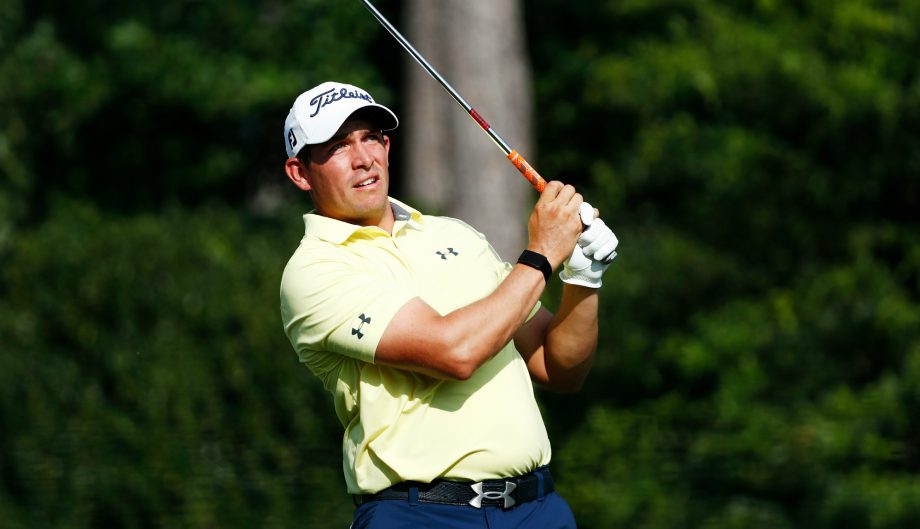 Scott Stallings birdied the final hole for an 11-under 60 and a one-stroke lead Saturday in the PGA Tour’s Barbasol Championship.

Stallings’ 12-foot putt on the par-4 18th caught the right edge and dropped in for the second 60 in two days in sweltering conditions at Grand National’s rain-softened Lake Course.

“I just tried to stay as cool as I could temperature-wise,” Stallings said. “It’s brutal hot out there. … I think that was a good distraction for me. I knew I was playing well, but just trying to drink as much water as I could and try to eat when I could, and when it was my turn to hit, be ready to go. It’s pretty easy to lose your train of thought. I definitely ran into that yesterday.”

Greyson Murray was second after his second straight 64.

Stallings hit all 18 greens in regulation and birdied the final three holes to tie the course record set last year by Jhonattan Vegas and matched by Chad Collins on Friday. The three-time PGA Tour winner had the lowest round of his tour career and broke the tournament 54-hole record at 19-under 194.

“The golf course looks good to my eye,” Stallings said. “I played a bunch of junior golf and college golf on Robert Trent Jones courses. You drive it in play, you’re going to have lots of opportunities to hit it close just with the bowls and the sections they have on the greens. Just tried to do whatever I felt off the tee to feel comfortable and put the ball in play and kind of go from there.”

Stallings played the first five holes in 5 under, holing a 15-foot eagle putt on the par-5 fifth. He bogeyed the par-3 sixth, birdied Nos. 8 and 9 for a front-nine 29, and added birdies on Nos. 11 and 13 before the late run.

“The lead or whatever is sort of irrelevant to me,” said Stallings, coming off a fifth-place tie last week in the John Deere Classic. “All that stuff will take care of itself. I’m just happy to be playing the way I know I can, put myself in position and the rest will kind of take care of itself. I can’t control what anyone else does. I can control my attitude and the effort that I put forward and that’s really all I can take care of.”

Murray had four birdies in a six-hole stretch on the back nine, with the two pars coming on par 5s.

“The scores are out there,” Murray said. “You saw Stallings, I think, shot 60 today. Obviously, you’ve got to be on all cylinders and hit fairways to do that. If I take care of the par 5s like I normally do, I would be in the lead. You can’t look at it like that. I played well.”

Jim Furyk, the only player to shoot two sub-60 rounds in PGA Tour history, had his second straight 68 to get to 8 under. The 47-year-old U.S. Ryder Cup captain is playing the event after failing to qualify for the British Open.