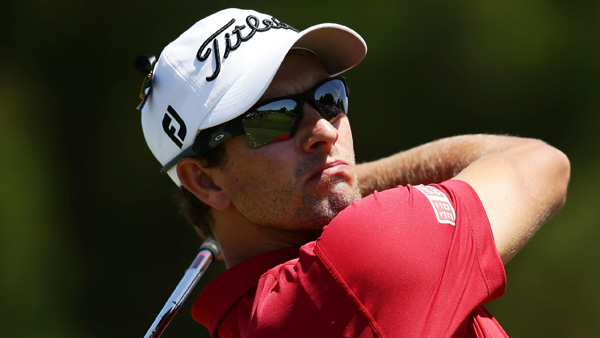 SYDNEY — American Jordan Spieth was one of few players to master a wind-swept course at the Australian Open on Saturday, shooting a 2-under 69 to move into a three-way share of the lead.

Only eight players were under par.

“They’re baked (the greens), they’re very shiny, they’ve firmed up significantly and then with this wind, there were putts that were lightning fast,” Spieth said. “I almost prefer it, wind and a very difficult golf course, I feel like plays into my hands.”

Scott shot 69 and was tied for fourth, a stroke behind the leading trio, along with Australian veteran Rod Pampling (69).

McIlroy, who had a triple bogey on the ninth hole and a double-bogey on 10, was six strokes from the lead, tied for 14th.

He was tied for the lead at 4-under and even on the day when he hit his tee shot on the par-4 ninth into waist-high rough. After failing to advance it and burying it in matting used to control weeds, he took a penalty drop, sliced that and finally got on the green in 5, where he two-putted for 7.

The Northern Irishman and world No. 1 then hit his approach on 10 into woodchips, failed to advance it back to the grass on his next shot, and two-putted for a six.

“I hit a wayward tee shot into what I thought was a decent-enough lie that I could advance the ball,” McIlroy said. “But I didn’t realize what I was standing on is not like dirt or earth. It was more like carpet. So the ball went underneath the carpet. Had it been a normal surface it would have been all right, but down there it was impossible.”

“I need a fast start tomorrow to have a chance,” he said. “I still feel like I can shoot a good one.”

Scott said the wind was affecting the players’ setup and shots.

“It really came up around the turn and blew hard on the back nine,” Scott said. “It’s really tough with the way it’s blowing, you are trying to stay as stable as you can. It’s certainly presented a pretty tough challenge this week.”

Rumford said the course was on the “razor’s edge” of toughness but said that is to be expected for a national championship.

“You feel as though you’re pedaling a million miles an hour going nowhere, seemingly,” said Rumford.

The round of the day was a 67 by Australian Daniel Nisbet, who teed off in the first group Saturday morning before the wind picked up.