How sweet it is at Thornhill Golf and Country Club 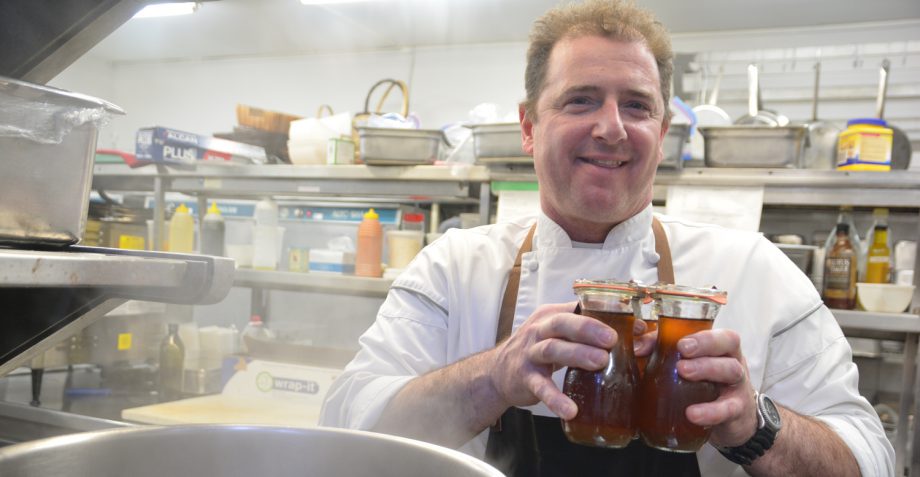 By mid-summer most golfers avoid the 100 year-old maples that dot several of the fairways at Thornhill Golf and Country Club at all costs, but in the early spring, these leafless giants are a welcomed sight to many.

Superintendent Greg McFarlane, who has been the caretaker for the 150-acre property for the past 19 years, has been as busy as a bee, (and we will get to those buzzing creatures momentarily) for the past few weeks collecting sap once or twice a day from about 50 tapped trees on the property. In the kitchen, every week or so, executive chef Tim Ayiotis and his staff have been enjoying the sweet aroma of boiling down the sap and bottling liquid gold – or maple syrup for members to enjoy at home or at the Young Street club that dates back to 1922.

This is unusual business for a private country club in the GTA, but it’s one of the many attributes that set the 27-hole Stanley Thompson designed layout apart from other establishments.

“We’re a golf course first and foremost, but we also recognize that we play a big part in the natural environment that encompasses the property and we strive to preserve and enhance what Mother Nature has given us,” McFarlane says who has worked with Global Organics since 2008 to reduce pesticide use annually without negatively impacting turf conditions. The program that is also in play at Toronto’s Oakdale Golf and Country Club, has been so successful, that Thornhill is now using 90 per cent less active ingredients when it comes to pesticides and fertilizers than the other top-100 private clubs in Ontario, as confirmed by an audit by KPMG.

Thornhill is home to deer, coyotes and foxes. There’s a naturalized water retention pond surround by water plants and bulrushes that is inhabited by snapping and painted turtles, ducks, fish and other creatures – even the odd Canadian goose!

McFarlane and Ayiotis have also teamed up to introduce a honey-producing bee colony that’s multiplying to six hives and a hollowed out tree this year. Their ever-expanding vegetable garden is taking root in new areas of the golf course and the bees also enjoy a variety of fruit trees that are scattered throughout the golf course.

“I like to call it the farm, and we’re putting it to work for the members to enjoy the fruits of our labour and love for the property,” says Ayiotis, who has been the club’s executive chef for four years.

The wild leaks that they planted among some hostas last spring will be ready for picking by the middle of May and Ayiotis can’t wait to incorporate them into soups and other dishes.

“Our members eat differently here and I think they have come to appreciate that,” he added. “We’re about creating menu items that are homemade, handmade, made fresh, as local as we can make it, almost everything we use is grown or produced within a 100 kilometre radius.”

Ayiotis doesn’t serve berries from California or South America during the winter months, but in the summer, he’ll flash freeze berries and fruits and then incorporate that fruit into preserves, syrup and puree that can be used throughout the year.

He’s even created a one-of-a-kind health bar for members using the maple syrup and the honey that’s produced from the golf course . . . and his poached pears in honey are a menu favourite.

Ayiotis also provides members with a fridge full of “To Go” menu items that can be picked up on the spur of the moment and the kitchen crew will also put together “Cottage Packs” for those members who like to enjoy prepared steaks or smoked ribs on the BBQ without all the work when they head north during the summer.

“Back in February I sat down with Greg and we went through the seed catalogue together and picked up the vegetables and herbs that we’ll be growing this summer,” he explained.

Many of the different seeds were planted indoors in March and will be transplanted when the weather warms up. They’re always experimenting and new this year will be some specialty cauliflower, squash and potatoes to go along with tomatoes, carrots, cucumbers, kale, Swiss chard, lettuce, 200 bulbs of garlic and a wide variety of herbs.

So if healthy eating isn’t enough, how about a club that engages and promotes a healthy lifestyle, with a state-of-the art fitness center that opened in 2015, six sheets of curling ice, four new Har-Tru tennis courts that will be unveiled this spring and construction of an outdoor swimming pool is scheduled to start this fall.

“We like to say that Thornhill G&CC is an oasis within the city where the entire family can escape to a special place where they can focus on being together and have fun in a healthy and active environment where we care for the entire person, not just a golf game,” says Joe Murphy, GM and COO at Thornhill.

Back on course, McFarlane is preparing the turf to host the mid-summer 2016 Investors Group Ontario Men’s Amateur Championship from July 12th to 15th. The club has a long tradition of hosting major events including the 1987 Ontario Men’s Amateur Championship won by Steve Hayles and more recently the 2006 Canadian University/College Championship, the 2009 Toronto Star Women’s Amateur won by Jennifer Kirby and 2014 Canadian Junior Girls Championship won by Team Canada Development Team member Grace St-Germain, who carded four consecutive under-par rounds to claim the title. In addition, Thornhill was the site that played host to 1945 Canadian Open where Byron Nelson claimed his remarkable 11th victory in a row.

It should be another memorable year at one of Canada’s most remarkable country clubs.