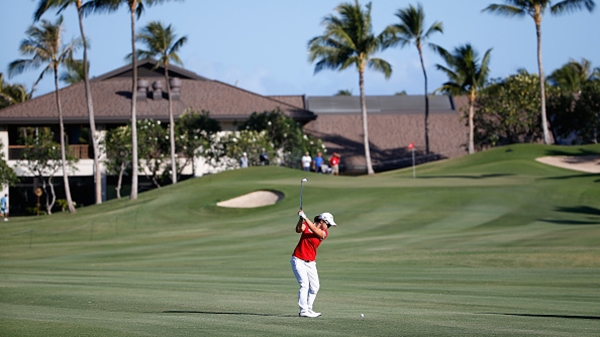 KAPOLEI, Hawaii – Sei Young Kim rode the wind and some major inspiration into a share of the lead Thursday in the second round of the Lotte Championship.

Kim shot her second straight 5-under 67 at breezy Ko Olina to catch first-round leader I.K. Kim at 10 under.

Sei Young Kim, the Pure Silk Bahamas LPGA Classic winner in February in her second start as an LPGA Tour member, began the round two strokes back. She bogeyed the opening hole, then rallied with four birdies before the turn and added three straight on her second nine.

Part of the 22-year-old’s motivation this week is what happened two weeks ago at the first major of the year, the ANA Inspiration in California. Kim took a three-shot advantage into the final round, but shot a 75 on Sunday and finished fourth.

“My win will certainly help me,” she said, referring to her victory in the Bahamas, “but I think what will motivate me better was the fact that I didn’t win. That’s really motivating me this week and that is going to get me to play better.”

Inbee Park, who ended the last two years ranked No. 1 in the world, was three strokes back after a 70.

Six of the top seven players are from South Korea. The exception is Paula Creamer. The American has won twice in Hawaii, including the 2008 Fields Open at Ko Olina.

“I love playing on these types of golf courses,” Creamer said. “Just the wind, the conditions. Your misses are exaggerated so much when you play in this kind of weather. Being a good ball-striker is incredibly important and that’s something that I’ve always felt was one of my strengths. For me, I like this. The windier it gets the better.”

I.K. Kim is going after her fourth LPGA Tour title, but first since 2010. She had just a pair of top-10 finishes last year, but a week off after the ANA Inspiration, and the warm wind and familiar food of Hawaii, have helped her this week – along with an improved putting stroke.

“After ANA, I spent a lot of time on the putting green,” I.K. Kim said. “I felt like I was hitting the ball really well, having a lot of opportunities, but putting was letting me down a little bit.

“I also went to Las Vegas, so putting and a little bit of fun and then here … I think that was kind of a good balance.”

Defending champion Michelle Wie was tied for eighth at 5 under with Japan’s Ai Miyazato and Haru Nomura. Wie, playing at home, shot a 69 that included an eagle from 117 yards out on the par-4 15th hole, followed by what she called a “nerdy” dance.

“I kind of saw it roll over the hill and I was like, `Oh, OK, it’s disappearing,'” Wie recalled. “Then everyone went crazy. It was pretty fun.”

Canada’s Sue Kim is tied for 39th at 1-over, while Rebecca Lee-Bentham and Alena Sharp have a share of 58th at 3-over heading into the weekend.