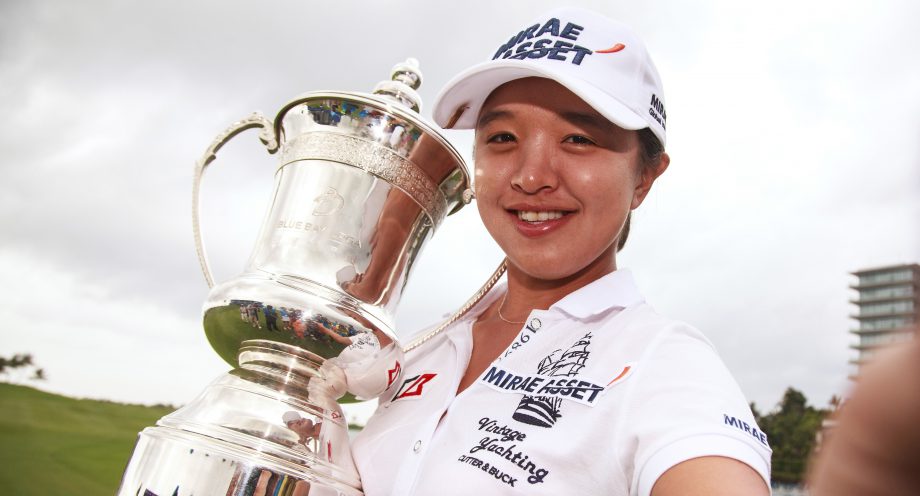 HAINAN ISLAND, China – Sei Young Kim made a 6-foot birdie putt on the par-5 18th for a one-stroke victory Sunday in the Blue Bay LPGA.

The 22-year-old South Korean player won for the third time in her rookie season on the LPGA Tour, closing with a 2-under 70 at difficult Jian Lake Blue Bay for a 2-under 286 total.

“I was like really nervous on the last putt,” Kim said. “I can hear my heart pound.”

After high wind sent scores soaring the first three days, the players faced only a moderate breeze on a rainy afternoon along the South China Sea.

Lewis finished with a 70 for her sixth runner-up finish of the season and the 21st of her career. She won the last of her 11 LPGA Tour titles in June 2014.

“She is one of my favorite players, so I’m very honored to play with her,” Kim said about Lewis. “But I win, she still is my idol.”

Kung shot a 71. Kaufman, playing a group ahead, had a 69 for the best round of the day.

“It was so hard out there,” Kung said. “You can’t worry about what other people are doing. We’re just trying to hold the umbrella. ‘Is it going to rain? Is it not going to rain?’ … It was busy out there.”

Kim won playoffs this year in the Bahamas and Hawaii in events also played in strong wind on seaside layouts.

“This year my target was just three wins, so I feel very fulfilled,” Kim said. “I also come through rookie of the year, so I would be very honored to win that.”

“The first goal is Olympic gold medal. Then my next goal is No. 1,” Kim said.

Kim dropped into a four-way tie for the lead on the par-3 17th when she three-putted from about 120 feet on the massive beachside green. Kung hit to 2 1/2 feet and Lewis to 4 1/2 feet, but missed their putts to the right.

“I tried to cut a shot because the pin, there’s no room behind, and I made a mistake,” Kim said. “I was very upset after that hole. … After they missed, I got a new opportunity.”

Kim’s best shot was on the par-4 10th when she holed a 40-foot flop from the rough to save par after hitting her approach long and left into the water.

“That chip happened to me, so I trust more that I can win,” Kim said.

She pulled even with Lewis with a birdie on the par-4 13th. Kim’s 3-wood drive took a big forward bounce off a cart path, leaving her a sand wedge approach that she hit to 6 feet. Lewis three-putted for bogey, missing a 5 1/2-footer.

Kim moved ahead on the par-5 14th when she made a 10-foot birdie putt and Lewis missed an 8-footer.

Kaufman had her best finish in her first two seasons on the tour. The 24-year-old former Texas Tech player from tiny Clark, South Dakota, birdied Nos. 9, 11, 14 and 15, then missed mid-range birdie tries on the final three holes.

Top-ranked Lydia Ko shot her second straight 70 to tie for eighth at 4 over. She had the best weekend total in the field after opening with rounds of 77 and 75.

“I’m happy that everything’s over and I can relax and go back home,” Ko said..

Ko won the LPGA Taiwan by nine strokes last week to regain the No. 1 spot from Inbee Park. The 18-year-old New Zealander has a tour-high five victories.

Canada’s Alena Sharp recorded her best LPGA Tour finish in 10 years, a tie for 5th at 3-over.