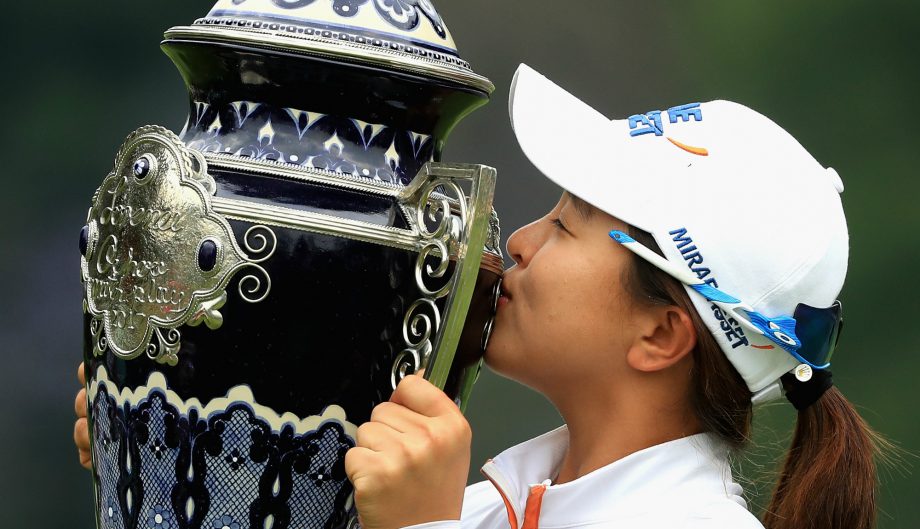 Sei Young Kim held off Ariya Jutanugarn 1 up on Sunday to win the Lorena Ochoa Match Play for her sixth LPGA Tour title.

After Jutanugarn won the par-5 17th with a birdie to force another hole, Kim finished off the match with a halve for a par on the par-4 18th.

“It was a really tough day today,” Kim said. “I never had such a hard win like today. I am happy that I was able to win and hold this trophy.”

Though, that wasn’t easy.

“That trophy is really heavy,” Kim said. “When I held it, I felt pain.”

Kim trailed for only four of the 95 holes she played, also beating Maude-Aimee Leblanc (3 and 1), Danielle Kang (3 and 2), Charley Hull (3 and 1) and Karine Icher (5 and 4) in the event that switched from stroke to match play and moved from November. The 24-year-old South Korean player is projected to jump from 12th to eighth in the world ranking.

Sei Young Kim talks about her 6th LPGA career win @LOYMEXICO and celebrating her victory with a margarita! pic.twitter.com/ffDDOMqAgT

Kim opened birdie-eagle-birdie to take a 3-up lead in the final.

“She is an aggressive player, even with the 3-up start, I was still very nervous and focused in making birdies,” Kim said. “I just kept playing as if I was 1 down.”

Kim missed a chance to win on the par-3 16th when her short birdie try lipped out. She then drove out of bounds to the right on the par-5 17th, and Jutanugarn took the hole with a 12-foot birdie putt.

Both players had birdie tries from about 10 feet on the par-4 18th. Kim’s just brushed the hole, knocking her to her knees in disbelief, and Jutanugarn missed to end the match.

Wie had a 5-up lead over Hur after 10 holes. Hur took five of the next seven holes to tie it and won with a birdie on the 22nd hole.

“I was so frustrated with my game,” Hur said. “I played 36 holes on Saturday and today as well, my mind was trying to keep it up. My caddie kept saying positive things and trying to keep my focused.”

Wie is winless since the 2014 U.S. Women’s Open. She won the then-Lorena Ochoa Invitational in stroke play in 2009 in Guadalajara for her first tour title.

Kim knocked off friend Hur in the morning.

“We have a good relationship. We live in the same area in Dallas so we’ve had dinner a couple times,” Kim said. “It’s really tough to play against a close friend, but it is a tournament, so we forget about it and focus on the tournament.”