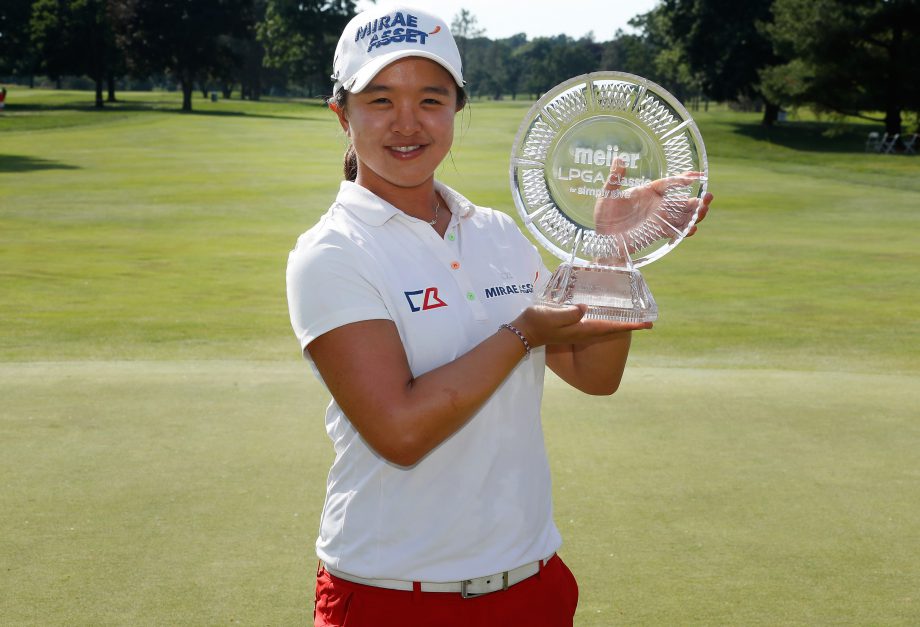 BELMONT, Mich. – Sei Young Kim won the Meijer LPGA Classic on Sunday for her second victory of the year, beating Carlota Ciganda with a birdie on the first hole of a playoff.

After bogeying the 18th in regulation to drop into the playoff, the 23-year-old Kim rebounded on the par-4 hole in the playoff.

“I just angry on myself,” Kim said. “I just, ‘Oh, I have to bounce back because today before I play, I setting my goal no bogey play.’ But last one I missed with bogey. If I bounce back, yeah, it is a good work, so I did it well today.”

On the extra hole, the South Korean player hit a 124-yard shot from the deep left rough – so deep that she momentarily lost her ball after looking away – that ran onto the green and settled at 3 1/2 feet.

“I realize really a lot of release, so I try to (hit) before the 10 meter to the front,” said Kim, projected to remain fifth in the world ranking. “It was good and I hit great hit. And my ball position was a little settled down, so I tried a cut shot. It was a, yeah, good work.”

Ciganda, from Spain, parred the final five holes in a bogey-free 67. She’s winless on the tour, with four runner-up finishes – two in playoffs.

“One can win, and if you can’t win, second is the best,” Ciganda said. “I’ll keep trying and just keep playing golf.”

She also drove into the left rough in the playoff, then hit a 156-yard shot through the green and couldn’t get up-and-down for par.

“It’s been a really good week,” Ciganda said. “I played very solid, especially my putting was really good, so I’m very happy with the week. I made only two bogeys in 72 holes, so I think that’s really good with this rough. And a playoff, only one can win and, obviously, I hit it to the rough. It wasn’t an easy shot and she hit a really good one. Congratulations to her. She was better.”

Kim has five career victories, going 3-0 in playoffs. She also won the Founders Cup this year in Phoenix, shooting 63-66-70-62 to match Annika Sorenstam’s LPGA Tour scoring record of 27 under. Last year, she won three times and was the rookie of the year.

On 18 in regulation, Kim drove left into the rough under trees, hit her second into thick rough left of the green and missed a 15-foot par putt. She didn’t immediately know she was in a playoff.

Her father, Jung Il, was with her on Father’s Day.

“I’m very happy to on the Father’s Day give it to my dad this trophy,” Kim said. “My dad really want to win this week.”

South Korea’s In Gee Chun, tied for the third-round lead with defending champion Lexi Thompson, had a 71 to finish third at 15 under. The U.S. Women’s Open champion bogeyed two of the first four holes.

Thompson, fighting back pain, shot a 72 to tie for fourth with top-ranked Lydia Ko at 14 under.

“The back is better the last two days,” Thompson said. “I had it taped up, so that wasn’t the issue. … I just didn’t putt well today. I had like 36 putts, I think, so that never helps out a scorecard. I still hit it pretty well, I thought. Just didn’t give myself too close birdie chances, but still didn’t hit that many good putts.”

Ko, coming off a playoff loss to Canada’s Brooke Henderson last week in the KPMG Women’s PGA Championship outside Seattle, closed with a 68.

“I needed to have a really low one to try and catch up,” Ko said. “I just tried to focus on my game and just try and stay patient. All you can do is try the best you can and if the girls, like last week, if somebody plays good, you can’t do much about it.”

Ariya Jutanugarn, third last week after winning her previous three starts, tied for 18th at 7 under after a 68.

Alena Sharp led the Canadian contingent with a 71 to claim a share of 13th at 9 under. Henderson matched the Hamilton native’s score to tie for 21st at 6 under, and Maude-Aimée Leblanc of Sherbrooke, Que., finished T50.