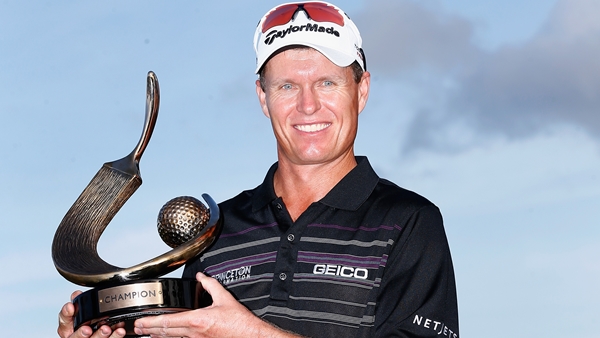 PALM HARBOR, Fla. – More than seven years without a victory. A trip to Augusta National riding on the outcome. A three-way tie for the lead going into a daunting three-hole closing stretch called “The Snake Pit” on the Copperhead course of Innisbrook.

John Senden was trying to keep his mind off all of that Sunday in the Valspar Championship.

The finish will be hard for him to forget.

Senden chipped in for birdie from 70 feet on the 16th hole, one of only two birdies in the final round at the toughest hole on the course. He followed that with a 20-foot birdie putt to build a two-shot lead, then made it tough for Kevin Na to catch him with perfect pace on a 40-foot putt on the 18th that left him only a tap-in for par.

Senden closed with a 1-under 70 and had enough strength left to hoist a trophy he said felt like 50 pounds.

“I didn’t turn my phone on because I know there’s going to be 4,000 messages,” Senden said. “It feels good to do it again after seven years. Lot of good things to come.”

One of them is next month – the Masters.

The 42-year-old Australian was No. 123 in the world and his only hope of returning to Augusta National for a third straight year was to win. That didn’t look likely after opening with rounds of 71-72, leaving him in the middle of the pack. He had a bogey-free 64 on Saturday to get back into contention, then closed it off on a wild and windy final round with Innisbrook as tough as it had been all week.

“If I could just stay in the moment, I knew I was swinging well enough to give it a shake,” Senden said.

Na recovered from an atrocious finish to his front nine – including a double bogey when he missed a 3-foot putt – to make it interesting. He nearly drove into the water on the 16th and escaped with par. He holed a 15-foot birdie putt on the 17th to get within one shot. But his pitching wedge out of the first cut of rough on the 18th hole sailed long, and 40-foot birdie putt to force a playoff never came close.

Na closed with a 72 and finished one shot behind.

“I knew coming into today that I felt like if I shot par I had a chance to win,” Na said. “If I break par, I felt like it was going to be a lock.”

He did neither, though his runner-up finish was his best PGA Tour result since he won in Las Vegas toward the end of the 2011 season. And there were no issues with pace of play that brought Na the wrong kind of attention – again – on Saturday.

Senden finished at 7-under 277, the third straight tournament on the Florida swing won with a single-digit score under par.

Scott Langley, hitting superb shots to account for the wind, didn’t hit a green over the final four holes and still managed to save par on three of them. The one bogey on the 16th hole, when he went long of the green from the middle of the fairway, proved costly.

Langley was the only player who shot par or better all four days. He closed with a 70 to finish alone in third.

Robert Garrigus started the final round with a one-shot lead, and that didn’t last long. His tee shot on the third hole bounced off a lawn chair and against a tree, leading to a double bogey. He made another double bogey on No. 6 and went out in 41. And he went 26 holes without a birdie. By the time he made a birdie, it was too late. Garrigus, now 0-4 with at least a share of the 54-hole lead, had a 75 to tie for fourth at 4 under.

“I know what I’m not going to be doing next year – fishing,” said Garrigus, who figures he caught three dozen large-mouth bass this week. “I’m going to bring a damn chain saw out to the place and cut a few trees down. I kept hitting it behind them all day. I just didn’t get any breaks.”

Will MacKenzie ran off four birdies in a five-hole stretch around the turn and closed with a 69. He tied for fourth with Luke Donald (70) and Garrigus.

Justin Rose had five bogeys over seven holes in the middle of his round and shot 74, a disappointing day for the world’s No. 7 player who had started the final round just three shots out of the lead. In a fitting end, he missed a 4-foot birdie putt on his last hole.

Senden last won a tournament at Royal Sydney at the end of 2006 in the Australian Open. Earlier that year, he picked up his first PGA Tour win at the John Deere Classic. He didn’t imagine going more than seven years until his next win.

“It’s something that makes you believe more than you can get it done again, rather than just once and thinking back then in `06, `Was it a flash in the pan?’ I don’t believe so,” Senden said. “But now it makes me feel (validated) from the John Deere.”

Graham DeLaet of Weyburn, Sask. and David Hearn of Brantford, Ont. both had top-10 finishes. The pair finished tied for eighth at 2-under par 282. DeLaet jumped 30 spots up the leaderboard Sunday thanks to a 3-under 68. Sang-Moon Bae (67) was the only player with a better final round.

Stephen Ames of Calgary finished 7-over par and tied for 65th spot.