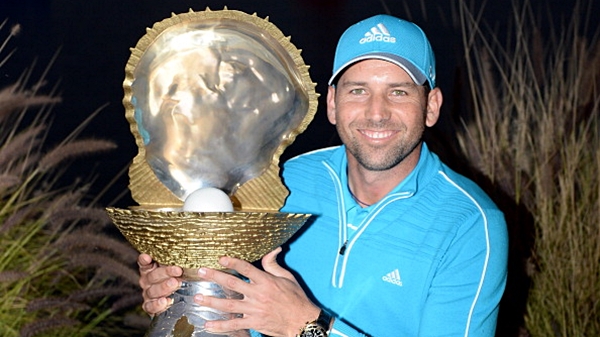 DOHA, Qatar – Sergio Garcia birdied the third extra hole to beat Mikko Ilonen in a playoff Saturday and win the Qatar Masters for his second victory in three events.

Garcia entered the round three shots behind overnight leader Rafa Cabrera-Bello but birdied six of his last 12 for a 7-under 65, forcing Ilonen to make an 18-foot birdie putt on the 18th hole to force the playoff with a 66. They both finished on 16-under 272.

Garcia missed an 8-foot birdie putt on the last that would have given him the win in regulation, and then couldn’t make an eagle putt for the victory on the first playoff hole.

The Spaniard and Ilonen both had birdies on the second extra hole as well before Garcia sealed the victory with a tap-in birdie at the third to Ilonen’s par.

Cabrera-Bello only managed a 69 and fell to a tie for third with Thorbjorn Olesen of Denmark (68).

Garcia’s victory helped make up for last year’s disappointment in Doha, when he finished runner-up after England’s Chris Wood eagled the last hole to claim his first European Tour win. It also came on the heels of his victory at the Thailand Golf Championship in December, when he had his girlfriend Katharina Boehm caddie for him. Boehm was among the first to congratulate him after he sealed the win on Saturday.

“When things off the golf course are on good terms it is a little easier to concentrate when you don’t have too many things in your head,” Garcia said. “I am very fortunate with Kathy and with my family and all those around me, so it’s great to be playing well and to be in this winning situation with the goal now to keep improving.

“I still feel like I can do better and that is the goal.”

Ilonen was seeking just his third tour victory after ending a six-year winless drought last June at the Nordea Masters.

“I came up two shots short of my target in regulation thinking a 64 would win outright, but a 66 was good enough for the playoff,” the Finn said. “But Sergio was a bit better than me.”

Olesen had the chance to join the playoff but missed his eight-foot eagle putt on 18.

European No. 1 Henrik Stenson finished strongly with birdies on his last four holes for a 67 that put him in a tie for 28th – perhaps a good sign at the end of a disappointing tournament ahead of next week’s Dubai Desert Classic.