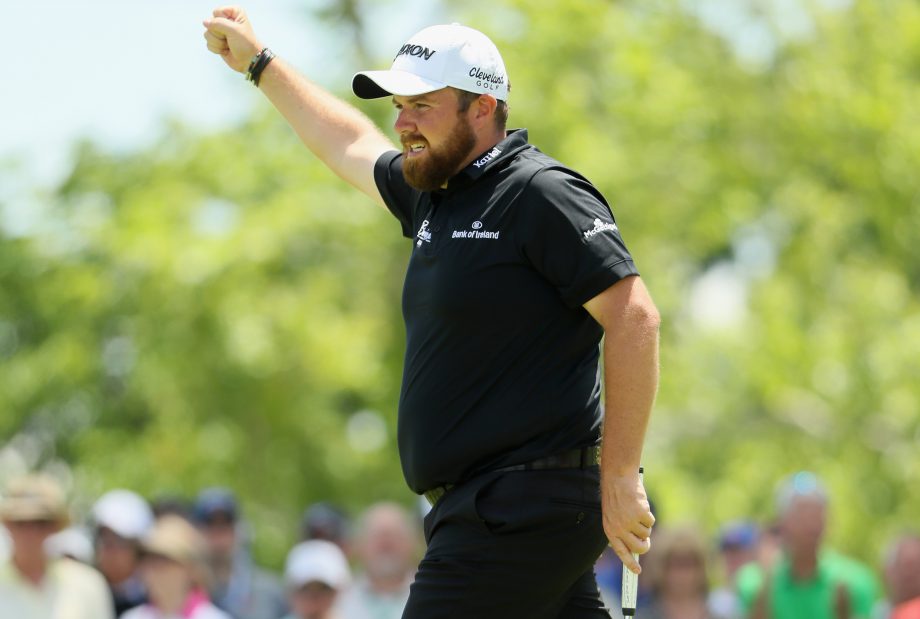 OAKMONT, Pa. – Shane Lowry kept his cool after a careless penalty and walked off Oakmont after a marathon Saturday with a two-shot lead in the U.S. Open.

Stalled by rain in the first round, the U.S. Open is nearly back on schedule and poised for a big finish.

Lowry, looking to give Irish golf its 10th major in the last 10 years, came within inches of his sixth birdie of the round on No. 14. He tapped in for par and headed back in when play was suspended by darkness.

He was at 5-under par and had to return Sunday morning to play the final four holes.

Two shots behind was 28-year-old Andrew Landry, in his first U.S. Open and playing like he knows how to cope with the toughest test in golf. Landry hasn’t flinched, even after tumbling down the leaderboard in his second round, and playing alongside Dustin Johnson in the third round. He had five holes left.

Right behind was a trio of players who feel overdue to win their first major.

That starts with Johnson, who had the 36-hole lead and started out like he wanted to run away from the field when he stuffed his approach to 5 feet below the hole for a birdie. But a chip that came back to his feet on No. 3 and led to double bogey stalled him, and Johnson started dropping shots.

He was at 2 under through 13 holes, still very much a factor as he tries to atone for his gaffe on the 18th hole at Chambers Bay last year in the U.S. Open. Also three shots back were Lee Westwood and Sergio Garcia, who between them have played 142 majors without winning.

After two of the longest days, Sunday becomes somewhat of a sprint.

Jason Day began his big run early. The world’s No. 1 player opened with a 76 and first had to worry about making the cut. He did, with one shot to spare, and then went on a tear of four birdies in five holes to start his third round. Day posted a 69 in the morning and a 66 in the afternoon and at one point was within in four shots of the lead.

He was at 1-over 211 and left the course six shots behind.

Defending champion Jordan Spieth looked as though he might join him when he ran off three straight birdies. But the 22-year-old Texan fell back with a double bogey on No. 2 (his 11th hole) and had to settle for a 70 and was nine shots behind Lowry.

“Come out tomorrow and try to pull a Johnny Miller,” Spieth said.

Miller famously closed with a 63 at Oakmont to win the 1973 U.S. Open, which remains the greatest final round by a major champion. But the course was drenched that Sunday, and that won’t be the case now.

Even though Oakmont absorbed nearly 3 inches of rain on the opening day and remain soft enough for shots to spin ever so slightly, it was clear the hot sun began to bake it out and it likely will be fierce as usual for the final round.

The leader in the clubhouse when the day ended was Branden Grace, who last year at Chambers Bay was tied for the lead until he hit 3-wood onto the train track and out-of-bounds for a double bogey that cost him. Good news for the South African: A train can be heard from Oakmont, but not hit.

Grace pieced together a 66 to reach 1-under 209, four shots behind Lowry.

Lowry picked up his biggest win last summer a few hours away at Firestone when he won the Bridgestone Invitational. Now he’s primed for more Irish success. The run began with Padraig Harrington claiming three majors in 2007 and 2008, and has been carried by the Northern Ireland trio of Rory McIlroy (four majors), Graeme McDowell and Darren Clarke.

“We all know that this course can jump up and bite you in a split second,” Lowry said. “So year, I’m two ahead with 22 holes left. Let’s not get ahead of ourselves. These are the best golfers in the world behind me. I have to go out there and do what I’ve been doing all week. I’m really looking forward to tomorrow. This is exactly where you want to be. I’ve been beating myself up over the last six months trying to get in this position.

It wasn’t so enjoyable earlier in the day when he was lining up a 30-foot birdie putt and nudged the ball with his putter. It moved ever so slightly, enough for Lowry to see, and he turned in disgust to call over an official, then held the putter behind his neck as if he wanted to snap it.

He took the one-shot penalty and then saved his mood with an 8-foot bogey putt.

Some of the best players weren’t around for the afternoon. McIlroy needed a par on the final hole to make the cut and took double bogey. Phil Mickelson, Rickie Fowler and Justin Rose also missed the cut.