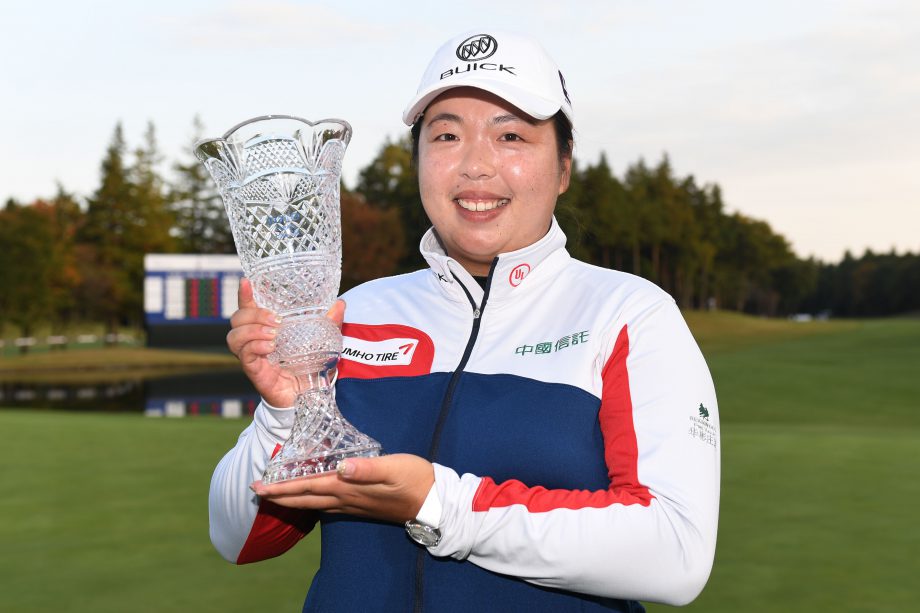 IBARAKI, Japan – Shanshan Feng needed every bit of the three-stroke lead she took to final hole Sunday at chilly Taiheiyo Club to finish off her second straight LPGA Tour victory.

The 27-year-old Chinese star closed with a double-bogey 6 to beat Ha Na Jang by a stroke in the TOTO Japan Classic, the last of six straight events in Asia. Feng closed with a 2-under 70 for a 13-under 203 total, the double bogey her only dropped shots since the fourth hole Friday.

She knew she had a three-stroke lead after birdieing the par-5 17th, not that she wanted to know.

“I have a habit where I don’t look at leaderboards when I play, but I accidentally saw the board when I was on the 17th green,” said Feng, the winner last week in steamy Malaysia.

She drove to the left and needed two more shots to reach the green.

“I thought easy two-putt, but the first putt, I just hit it way too hard,” Feng said. “The second putt, I missed and left myself a 3-footer and said, ‘It’s time to make this putt.’ I didn’t want to lose by making a triple bogey on the last.”

The putt – really only about half the length that Feng recounted – fell for her sixth LPGA Tour victory.

Projected to jump from eighth to sixth in the world ranking, Feng has finished no worse than a tie for fourth in her last seven events. She started the run with the Olympic bronze medal in Rio, tied for fourth at Evian in France, opened the Asia trip at home in China with a fourth-place tie, was second behind Jang in Taiwan and tied for third in South Korea.

“Coming into this week I had a lot of confidence and I’m feeling really comfortable,” Feng said. “I knew that I would have a chance because I’ve always liked the Japanese courses that I’ve played and I’ve played well in Japan.”

She broke through at Taiheiyo after losing a playoff to Momoko Ueda in the 2011 event at Kintetsu Kashikojima, the tournament venue from 2006 to last year.

Playing two groups ahead of Feng, Jang birdied 16 and 17 in her third 68. The South Korean player has three victories this year, beating Feng by a stroke in Taiwan.

“Every day, I had strong front nine, but was a little tired on the back nine,” Jang said. “Just tried to be patient every hole. My target was 12-under par this week and I hit my target perfect.”

“I wasn’t actually striking the ball very well and then I didn’t give myself many birdie chances,” Feng said. “Putting was OK and then after the eighth hole I said to the others in my group, ‘We are the last group, so we need to start making birdies.’ Then, the ninth hole I had a very good chance and made it and then 10th and 11th were great birdies.”

Feng shot a tournament-best 64 on Saturday to take one-stroke lead over second-ranked Ariya Jutanugarn into the final round.

Jutanugarn missed a chance to wrap up the LPGA Tour player of the year award with a victory, shooting a 74 to drop into a tie for 10th at 8 under. The Thai star leads the tour with five victories and also tops the money list.

“Today was just not a good day,” Jutanugarn said. “I missed some tee shots and my putting was so bad.”

The top-ranked Lydia Ko, 14 points behind Jutanugarn in the player of the year race, had a 69 to tie for 43rd at 2 under. Ko and Jutanugarn are skipping the Lorena Ochoa Invitational in Mexico and will close the season in two weeks in Florida at the CME Group Tour Championship.