Sharp, Marchand and Henderson in contention at Manulife LPGA Classic 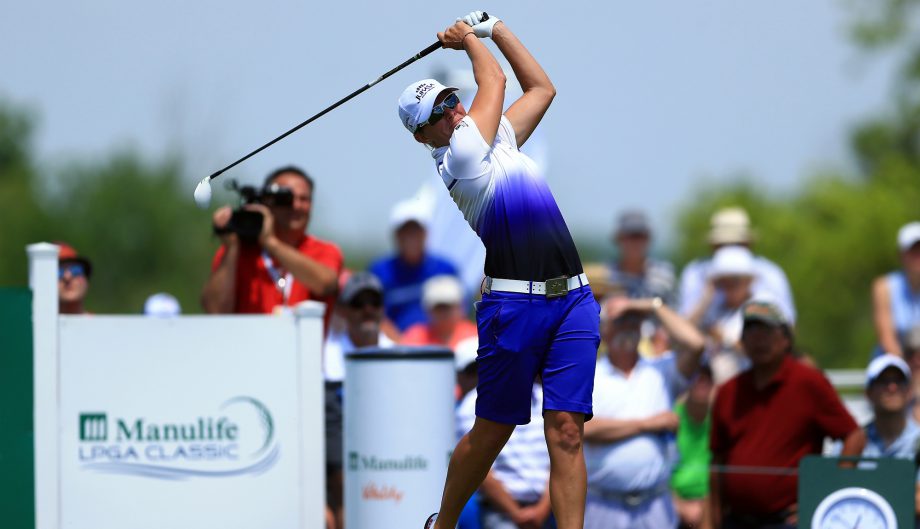 Brittany Marchand is making the most of her first weekend appearance at an LPGA Tour event. Fellow Canadians Alena Sharp and Brooke Henderson are right in the mix too.

Marchand had a 67 Saturday at the Manulife LPGA Classic to move five shots behind third-round leader Lexi Thompson of the United States, who closed with a birdie for a 67 to move to 17-under-par 199.

Sharp, who started the day in a three-way tie for the lead with Thompson and South Korea’s Hyo Joo Kim, shot a 70 to sit three shots off the pace. Henderson was also within striking distance after a 68 left her seven strokes behind.

“It was good to get through this round,” Sharp said. “I didn’t hit it as great as I would have liked to but my putter saved me. I had a lot of up and downs.”

American Lindy Duncan was alone in second place at 16 under and South Korea’s In Gee Chun was two shots off the lead at 15 under.

Marchand, a Symetra Tour player from Orangeville, Ont., wasn’t intimidated despite playing with world No. 2 Ariya Jutanugarn of Thailand, who was tied with Sharp in fourth place after a 65.

“I felt like I would probably be nervous today and I actually felt a lot more comfortable than I expected,” Marchand said. “I think that’s a good sign for tomorrow.”

Five early birdies helped Marchand to a blistering 31 on the front nine in warm, breezy conditions at Whistle Bear Golf Club. On the back nine, she bogeyed No. 10 but got the stroke back with a birdie on the 13th hole.

Henderson, from Smiths Falls, Ont., kept herself in the mix despite opening with a bogey. She followed that hiccup with two straight birdies and played bogey-free golf from there.

This was new territory for Sharp, who’s from nearby Hamilton. It was the first time in her 12-year LPGA Tour career that she has been the leader or co-leader after 36 holes – a span of 246 starts.

Marchand, meanwhile, is playing on a sponsor exemption. She’s coming off a season-best 15th-place result at last week’s Fuccillo Kia Classic of New York on the lower-level Symetra Tour.

She earned US$1,749 for that result. The 24-year-old will be in line to earn much more than that on Sunday.

A victory here would give her Category 7 status on the LPGA Tour and a likely spot in the Walmart NW Arkansas Championship later this month.

Marchand has also played at the U.S. Women’s Open and the Canadian Open over her career. This is the first time she has made a cut in six career appearances on the LPGA Tour.