Shaw Charity Classic kicks off with an ace opportunity 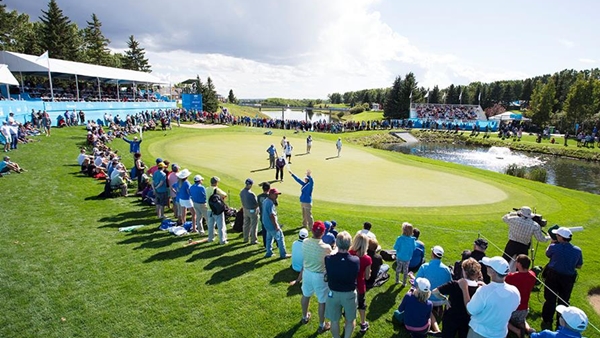 CALGARY – The Shaw Charity Classic is giving one lucky fan – and three friends – the chance to feel like a professional golfer for a day.

The Champions Tour event in Calgary has launched a unique, three-stage contest for any Canadian resident that scores a hole-in-one at a Golf Canada Member Club across the country between March 1 and July 20, 2015.

Individuals who record a hole-in-one on a hole 85 yards or longer during a 9 or 18-hole round of golf will be invited to a qualification event at Calgary’s Golf Canada Centre, July 24, 2015. Each member of the hole-in-one club will have one attempt in a closest-to-the-pin contest. The 10 closest shots will then be invited to Media Day at Canyon Meadows Golf and Country Club, the host course of the Shaw Charity Classic, on July 29, 2015 where they will compete head-to-head in another closest-to-the-pin contest for the Grand Prize of one full Pro-Am Team. Balls finishing off the green will be ignored even if they are closest to the hole. Entrants will be responsible for all their costs for attending and playing golf on the day of the qualifiers.

“Anyone who ever plays golf realizes getting a hole-in-one earns you a spot in a very exclusive club, and we want to celebrate these accomplishments by giving Canadians who achieve the feat the opportunity to win the ultimate golf experience and play with the greatest names in the game,” said Sean Van Kesteren, tournament director, Shaw Charity Classic. “It is our goal to recognize, and celebrate, each hole-in-one this summer and bring this exclusive club together in Calgary for a final showdown to win the chance to feel like a Champions Tour professional for a day at the Shaw Charity Classic in August.”

Individuals who record a hole-in-one during the 2015 contest period must register through the tournament web site at www.shawcharityclassic.com. The hole-in-one must be attested by the golf facility’s general manager, chief operating officer, club president, head professional or director of golf. Participants between the ages of 13 and 18 must also have parental consent. The Shaw Charity Classic will aim to profile each hole-in-one on its social media platforms.