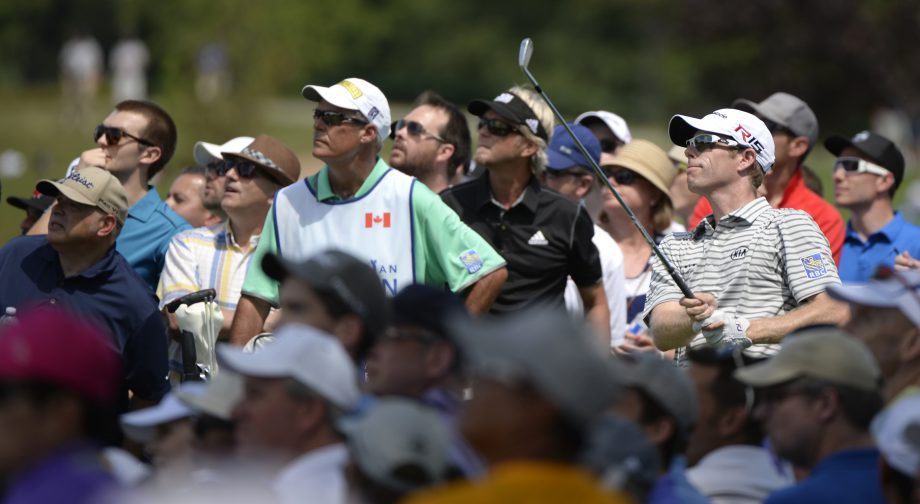 With this sponsorship, Hearn, DeLaet, and Hadwin will wear the Shaw logo on their golf apparel, as they kick off the season at the PGA TOUR’s Sony Open in Hawaii from January 11-17, 2016. Both Hearn and DeLaet will wear Shaw’s logo on the front of their hats, while Hadwin will sport the logo on the collar of his golf shirt.

“Shaw’s golf sponsorship portfolio has provided us with a powerful branding platform to expand our profile across Canada, generate new business, and give back to the communities we serve in meaningful ways,” said Chethan Lakshman, Vice-President, External Affairs, Shaw Communications. “Adding David to the team strengthens our player roster and gives us more opportunities to connect with our customers and viewers through engaging golf content. We are proud to have such high-level athletes as part of the extended Shaw family, and we are looking forward to watching David, Graham and Adam as they represent Shaw on the PGA TOUR this year.”

“I’m proud to partner with Shaw – an iconic Canadian organization that is deeply rooted in the golf space, and shares my passion for growing the game in Canada,” said Hearn. “I’m excited to join the Shaw Team as an ambassador, representing the company and synonymously our country on the PGA TOUR”.

From Brantford, Ont., David Hearn has had a successful golf career across several professional tours. During the 2014 PGA TOUR season, Hearn recorded six Top-25 finishes, including three Top-10 results. In 2015, Hearn continued his solid play and excited golf fans across Canada with four Top-10 and four Top-25 finishes, which included a third place finish at the RBC Canadian Open.

Shaw’s renewed commitments to DeLaet and Hadwin include significant donations to the players’ charitable causes in Saskatchewan and British Columbia, respectively.

“I’m thrilled to continue my partnership with Shaw on and off the golf course,” said DeLaet. “The support the team at Shaw has shown me, my wife Ruby, and our foundation has taken our relationship to the next level. I am excited to continue playing on TOUR while representing Shaw in Canada and in the golf space.”

Adam Hadwin has been a standout on the professional golf scene since 2010, highlighted by a Top-4 finish at the 2010 RBC Canadian Open to earn the first of his two career Rivermead Trophies, which honours the low Canadian at Canada’s national Open. In 2014, the Abbotsford, B.C. native emerged as a top player when he won twice on the Web.com Tour, securing his PGA TOUR playing
privileges. In his PGA TOUR rookie campaign in 2015, Hadwin retained his TOUR card for 2016 with three Top-10 and seven Top-25 finishes.

“I have been proud to partner with Shaw for the past couple years, and represent them on the PGA TOUR,” Hadwin said. “I have been lucky to get to know the company and I’m proud to say that we care about the same things and want to work together to showcase golf in Canada.”

Shaw continues to be a champion for golf in Canada. In addition to being the broadcast destination for PGA TOUR golf through Global TV, Shaw is also a premier sponsor of the RBC Canadian Open, and the title sponsor of the Shaw Charity Classic, a Champions Tour event held at Canyon Meadows Golf and Country Club in Calgary, Alberta.