A short return for Tiger Woods at Congressional 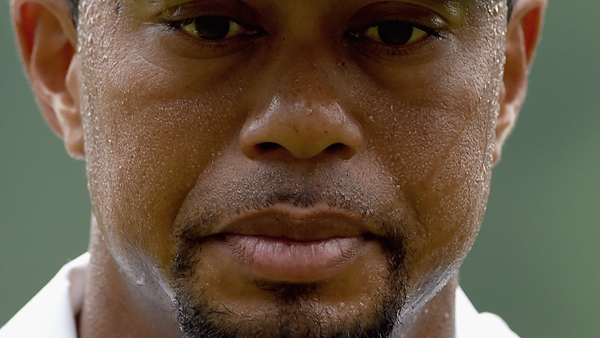 Taking two shots to escape a plugged lie in a bunker put him a hole. Four straight bogeys on the back nine Friday in the Quicken Loans National buried his chances of making it to the weekend. Over two rounds at Congressional, he missed 16 greens and managed to save par only three times.

Woods was back – just not for very long.

Playing for the first time in more than three months because of back surgery, he had a 4-over 75 on Friday and missed the cut by four shots. It was only the 10th time in his PGA Tour career that Woods missed a 36-hole cut, and the first time he didn’t sound overly distressed.

“I hate to say it, but I’m really encouraged by what happened this week,” Woods said. “I missed the cut by four shots – that’s a lot. But the fact that what I was able to do physically, and the speed I had and the distance that I was hitting the golf ball again, I had not done that in a very long time. Felt great today. Then, as I said, I made so many little mistakes … all the little things that I know I can fix. But as I said, that’s very encouraging.”

And it wasn’t all that surprising.

Woods had played only four tournaments this year while coping with an increasingly sore back, which led him to have surgery March 31 and miss the first two majors. He had hoped to return for the British Open next month. Instead, he felt strong enough to play the Quicken Loans National, primarily because it benefits his foundation and Woods figured he needed to get in a little competition before going to Royal Liverpool.

Even it if was only two rounds.

“I came back four weeks earlier than we thought I could,” Woods said. “I had no setbacks. I got my feel for playing tournament golf. I made a ton of simple, little mistakes – misjudging things and missing the ball on the wrong sides and just didn’t get up-and-down on little, simple shots. Those are the little things I can correct.”

Marc Leishman of Australia turned potential bogey into unlikely birdie when he holed out from 127 yards on the par-5 ninth hole on his way to a 5-under 66 and a four-way share of the lead going into the weekend.

Oliver Goss, another Aussie who is making his second pro start, had a bogey-free 66 and joined Leishman at 6-under 136 along with Ricky Barnes (69) and Patrick Reed (68), who already has won twice this year.

It wasn’t the largest 36-hole gap from the leaders in the previous nine times he missed the cut on the PGA Tour.

It just looked that way.

Woods took two shots to get out of a plugged lie in a bunker on the fifth hole and made double bogey. He three-putted for par on the next hole and never looked more sloppy than on the short par-4 eighth. He was in perfect position after hitting a big drive, 61 yards from the hole at the right angle. His pitch was too strong and left of the flag, leaving him a downhill chip from the collar. He hit that 7 feet by and missed the par putt.

Even so, the damage came after consecutive bogeys around the turn. His tee shot went into a hazard on No. 11, forcing him to punch out. He hit a wild hook off the tee on the 12th, and his second shot was headed for a bunker until it was suspended in the grass on the lip of the sand. He hit a poor chip from below the green on the 13th. And from the 14th fairway, he missed the green and hit another poor chip.

Four bogeys, no time to recover.

“If it were anybody else, I would say that I would expect kind of a struggle. But you just never know with Tiger,” Jordan Spieth said after his own brilliant display of a short game that allowed him to make the cut. “He just got a couple rounds under his belt. So he’s going to be a severe threat at the British – probably a favorite – and after playing these couple rounds, I think he’ll take something from it.

“He’s not that far off from being right back to where he was.”

Woods took encouragement from not feeling any pain in his back, and from swinging as hard as he wanted with his driver. That’s what concerned him about playing this week. Turns out it was the two shortest clubs in his bag – the wedge and putter – that did him in.

It was surprising to see Woods go straight from the range to the tee in both rounds. Most players give themselves a few extra minutes in the chipping area.

“The short game was off,” Woods said. “I’ve been practicing on Bermuda grass, and I grew the grass up at my house and it was Bermuda. But come out here and play rye, it’s totally different. And it showed. I was off. I probably shout have spent more time chipping over on the chipping green than I did. But that’s the way it goes.”

His last act as tournament host is to present the trophy, and that could be anyone.

Ten players were separated by only two shots going into the weekend, and there was only a nine-shot differential from first to last place. Former U.S. Open champion Justin Rose had 65 to get within three shots of the lead.