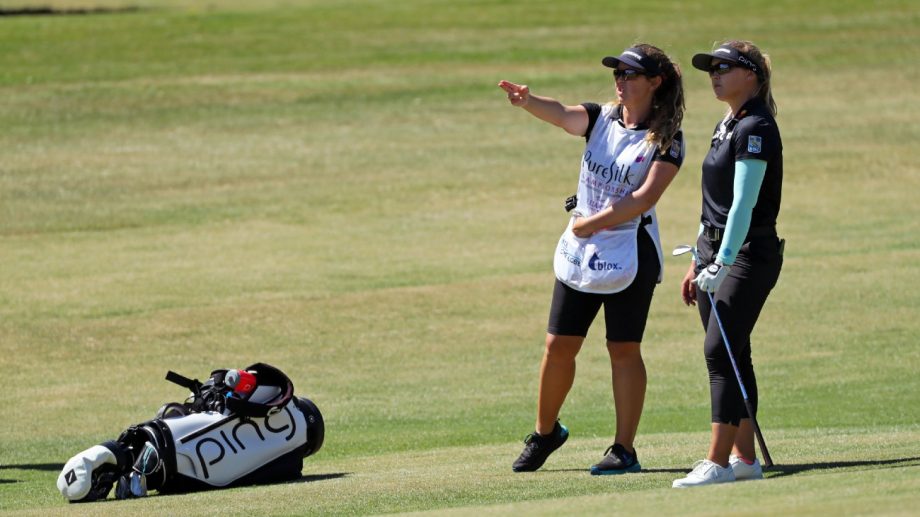 WILLIAMSBURG, VA - MAY 21: Brooke M. Henderson of Canada and her caddie discuss her second shot on the ninth hole during the second round of the Pure Silk Championship presented by Visit Williamsburg on the River Course at Kingsmill Resort on May 21, 2021 in Williamsburg, Virginia. (Photo by Hunter Martin/Getty Images)
Canadian Press

She closed with a 3-under 68 to finish at 13-under 271, two shots clear of playing partner Moriya Jutanugarn.

Shu’s eagle, aided by a fortuitous bounce that left her with a very makeable putt, came as Jutanugarn, who started the hole with a two-shot lead, drove into a bunker, needed two shots to get out, hit her approach to the edge of the green and three-putted for a double bogey.

And it all happened on the easiest hole on the course, again showing it can also be the decisive one.

The victory for the 26-year-old from Taiwan, in her 147th career start, was all but assured with another birdie on the par-4 16th that stretched her lead to three. And it came on a sweltering day on the Kingsmill Resort’s James River Course with parched fairways and greens that were fast and firm for all four rounds unusual for May in Virginia.

For much of the day, the battle for the lead was like a juggling act.

Jessica Korda pulled into a three-way tie for the lead with third-round co-leaders Shu and Jutanugarn with a birdie at the par-4 sixth while Jutanugarn bogeyed and Hsu made par. Korda went ahead two holes later with a par when her two playing partners bogeyed.

Hsu regained the top spot at No. 12 with a birdie while Korda fell two back, and then Jutanugarn enjoyed the same two-shot swing with a birdie at the par-3 13th while Hsu two-putted for bogey after missing the green.

Jutanugarn’s lead doubled with her third birdie in four holes on the par-4 14th, setting up the remarkable final lead-swap at 15.

Jutanugarn did sink a long birdie putt on the par-3 17th, applying some pressure to Hsu, but she rolled in a putt for par, pumping her right fist as it dropped into the cup.

The tournament, once among the most popular on the tour, failed to attract several of the game’s top players, perhaps because its purse of $1.3 million is third-lowest on the tour.