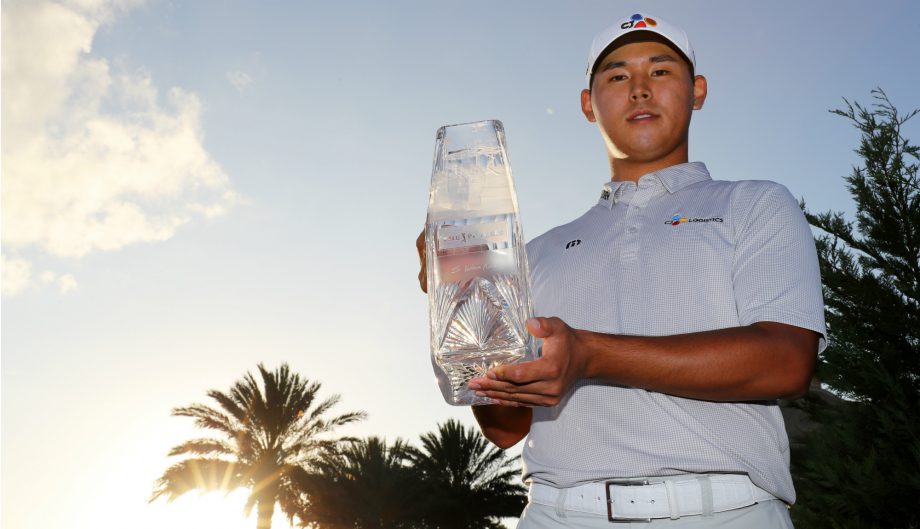 Si Woo Kim of South Korea became the youngest winner of The Players Championship with a game and nerves well beyond his 21 years.

On a TPC Sawgrass course where anything can go wrong without notice, Kim was the only player to go bogey-free Sunday and closed with a 3-under 69 for a three-shot victory in golf’s biggest tournament this side of the majors.

He also managed to take all the suspense from the TPC Sawgrass.

All that could stop him was the final two holes, when Kim had a two-shot lead and faced a tee shot to an island green, and then a closing hole with water all the way down the left side. Kim hit the 17th green and two-putted from 45 feet, and he smashed another drive right down the middle.

From one champion to another.

The only drama at the end came from Ian Poulter, who was happy just to be here.

Poulter, who only two weeks ago was spared his full PGA Tour status because of a clerical oversight, was the only player to seriously challenge Kim until he ran out of holes. He pushed his approach to the 18th so far to the right that it caromed off hospitality tents and bounced off a cart path into a palmetto bush. He took a penalty drop, then hit wedge over the trees and nearly holed it, tapping in for par.

Poulter, who had gone 39 holes without a bogey until a crucial one at No. 12, closed with a 71. He tied for second with Louis Oosthuizen (73).

There was plenty of excitement Sunday.

Rafa Cabrera Bello of Spain hit 8-iron that bounded off the side of a bunker and into the cup for an albatross 2 on the par-5 16th. He followed that with a birdie on the 17th, and then holed a long par putt from just off the 18th green. That gave him a 70 and a tie for fourth with Kyle Stanley, a co-leader after 54 holes who shot 75.

The other co-leader was J.B. Holmes, and it was a horror show for the Kentuckian.

Holmes shot 40 on the front nine and still had hope until bogeys on the 14th and 15th holes. And then it turned ugly. He hit too shots into the water on the 17th and make a quintuple-bogey 8, then finished with a double bogey to close with an 84.

He was tied for the lead at the start of the day and finished in a tie for 41st.

It was the worst finish by a 54-hole leader in tournament history, a record that previously belonged to Graeme McDowell (2011) and Alex Cejka (2009), who both shot 79.

Holmes wasn’t alone. Defending champion Jason Day closed with an 80, keeping very much in tact the streak of no winner ever repeating in the Players. Rickie Fowler, who won the year before, closed with a 79.

As for the winner? That was rarely in doubt over the back nine. Even though Kim only hit eight greens in regulation, he went six straight holes on the back without facing a par putt over 2 feet. Kim bumped a fairway metal to just over 3 feet on the final hole and rapped in the par putt to being the celebration.

The 21-year-old has claimed @THEPLAYERSChamp! ?

He’s the youngest member on the PGA TOUR. #QuickHits pic.twitter.com/f5fZEgXMte

“I still can’t believe I’m the champion, and I’m the youngest champion,” Kim said. “I’m looking forward to working hard from now on.”

The previous youngest champion of The Players was Adam Scott, who was 23 when he won in 2005.

“From that moment, I was dreaming that I really want to be in this tournament,” Kim said through a translator. “And I’m very glad I could practice with him. He gave me a lot of advice. That’s why I could do well.”

Just over four years ago, Kim came over to America to play the final version of PGA Tour’s qualifying school. He earned a card at age 17, but he could not become a PGA Tour member until he turned 18 the following June. That card effectively went to waste, and Kim spent the next two years on the developmental tour until earning his card back to the big leagues.

Now he’s here to stay for at least the next five years, and based on his game, probably much longer.

Mackenzie Hughes, of Dundas, Ont., was the top Canadian finishing T16, after being the 18-hole leader.