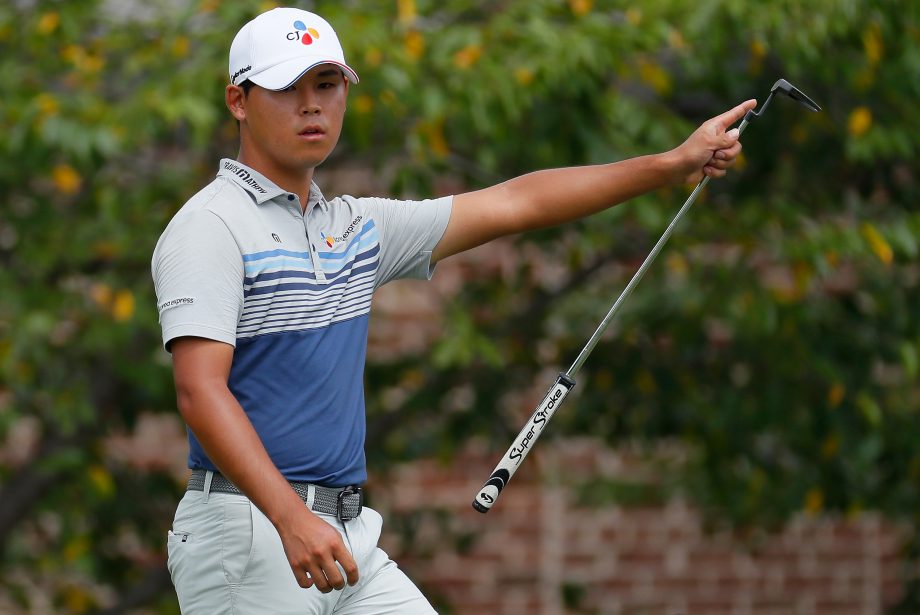 GREENSBORO, N.C. – Si Woo Kim shot a tournament-record 10-under 60 on Friday at Sedgefield to take the second-round lead in the Wyndham Championship.

Trying to become the second player this month to break 60 on the PGA Tour, the 21-year-old South Korean player slid a 50-foot birdie putt by the right edge on his final hole – the par-4 ninth. He drove into the left rough, costing himself a clean shot at the front pin position.

Jim Furyk shot the first 58 in PGA Tour history Aug. 7 in the final round of the Travelers Championship. Six players, including Furyk, have shot 59.

“My irons and putting game is much better,” Kim said. “Much more putting practice last week.”

After making three bogeys in an opening 68, Kim had a 12-under 128 total for a two-stroke lead over Furyk, Lucas Glover, Kevin Na and Japan’s Hideki Matsuyama.

“Not so much celebrate today,” Kim said. “After this week, play good, I celebrate. Just trying rest today and then to see dinner.”

“I’m a little surprised how low the scoring is,” Furyk said. “The fairways are pretty firm. They’re extremely quick, have a lot of slope in them. If you get the ball in the fairway, it’s playing short, the ball is rolling. I can see guys hitting lot of wedges. I’m still shocked we had so many guys going that low.”

Na, tied for the first-round lead with Spain’s Rafa Cabrera Bello at 63, had a 67.

“I’m in good position for the weekend,” Na said. “Keep attacking those flags and we’ll see.”

Cabrera Bello was three strokes back at 9 under after a 68.

“I felt I played good for the majority of the round, just the putts didn’t want to drop in,” said Cabrera Bello, fifth last week in the Rio Olympics.

U.S. Olympian Rickie Fowler was tied for 11th at 6 under after his second 67.

Nick Taylor from Abbotsford, B.C., posted a 3-under 67 to move into a tie for 35th. Fellow Abbotsford product Adam Hadwin shot 65, but along with David Hearn (Brantford, Ont.) and Graham DeLaet (Weyburn, Sask.), will not advance to weekend play.