Sick Tiger Woods finally gets back to par with 69 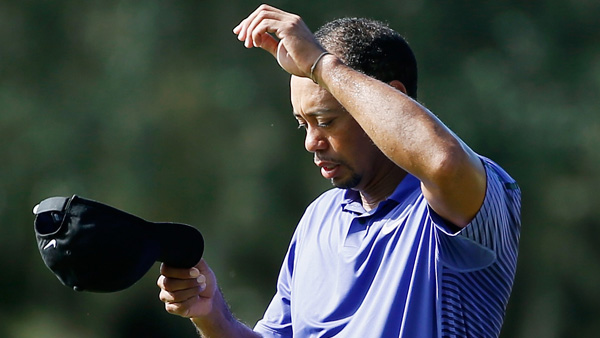 WINDERMERE, Fla. — Tiger Woods had his best score of the week and never felt worse Saturday in the Hero World Challenge.

Woods lost his voice overnight. He was nauseous on the practice range and when he took a swig of water on the first hole, he threw it up. He had a fever that finally broke on the front nine at Isleworth. And he closed with three straight birdies for a 3-under 69.

It was enough to at least get back to even par for the tournament, though he remained in last place and was the only player not under par.

Woods hasn’t competed since Aug. 9 when he missed the cut at the PGA Championship, taking off nearly four months to build up strength so that his injured back would be fully healed. This is the only tournament he will play for about two months. The tournament benefits his foundation and learning centers, and it has a new sponsor.

What a time to get sick.

He said he wouldn’t have withdrawn even if this were not his tournament. And it’s not like illness has never held him back. It was 11 years ago, and just down the road at Bay Hill, when Woods battled a nasty bout of food poisoning during the final round. He won by 11.

“I like to compete,” he said. “If I can go, I can go. I’ll give it everything I have. I wasn’t in pain. Just a little bit under the weather.”

Woods said he threw up before and during the round, and he probably wanted to vomit after a couple of more duffed chips, which have received plenty of attention this week. Woods stubbed two more chips on Saturday, bringing the total to eight chips that could only be described as shockingly bad.

Both led to bogey, and Woods appeared to be on his way to another mediocre score until the end. After the fever broke and he said his strength slowly started to return, Woods was pin-high on the par-4 16th with a 3-wood (the tees were moved forward) and made an 8-foot birdie. He hit the middle of the green on the par-5 17th with a fairway metal that never left its target and had a two-putt birdie. And with an 8-iron from 170, he stuffed it on No. 18 for a third straight birdie.

The best part of the day? Playing with Billy Horschel, they finished in just over three hours.

“We played fast, which was nice,” Woods said. “I didn’t have to sit out in that heat for too long.”