Simpson has short putter, no expectations and share of lead in Hawaii 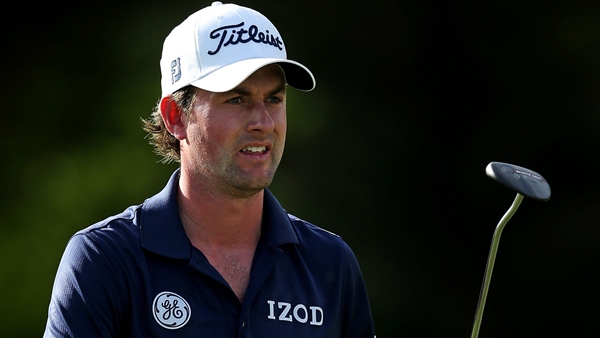 HONOLULU – Webb Simpson is one of those players who won’t break anything that doesn’t need fixing. But with change on the horizon because of a new rule that will outlaw the anchored stroke he uses for his belly putter, he opted for a radical solution.

He broke his putter.

“Snapped it over my knee,” Simpson said. “It’s a thick, heavy shaft, so I gave it all I had over my knee. It was a clean, flush break.”

So determined to change on his own terms instead of waiting until the new rule takes effect in 2016, Simpson made sure he couldn’t go back to the putter that helped to bring him a U.S. Open title, a spot on the last two Ryder Cup teams and a spot in the Tour Championship each of the last four years.

He broke the putter before going to the Dunlop Phoenix in Japan late last year, and he brought a conventional putter to Hawaii for the first PGA Tour event of the year. He opened with a 62 in the Sony Open, and then made three birdies over the last five holes Friday for a 66 and a share of the lead with Matt Kuchar (63) and 21-year-old rookie Justin Thomas, who shot a 61.

Kuchar is always around the top of a leaderboard as one of the most consistent players in golf. Thomas ordinarily would have been the biggest surprise at Waialae, especially the way he finished – birdie-birdie-eagle to join the leaders at 12-under 128.

All things considered, Simpson was the player who never imagined being tied for the lead.

“I didn’t have much expectation coming here, to be honest with you,” he said. “I wanted to just build on what I’ve been working on and hoping that we’re doing the right stuff, and with the putter, it was just a matter this week of wanting to get comfortable on the greens, wanting to get comfortable on long putts, short putts, everything. That was the goal. I didn’t really care how I played this week.

“I wanted to get through the West Coast Swing building on what I’ve been working on, so to be in the lead is a huge bonus.”

Change was easier than he imagined.

Simpson picked up a belly putter for the first time in 2004 at Pinehurst during a family holiday. He didn’t like his inconsistent putting at Wake Forest, saw the belly putter and made everything on the practice greens. He was afraid to break it out at Wake Forest for fear of being ribbed. Not many were using one at the time.

His U.S. Open title at Olympic Club in 2012 made him the second player, after Keegan Bradley in the 2011 PGA Championship, to win a major using a belly putter.

It helped slightly that he had what Simpson considered a mediocre season on the greens.

“I finished somewhere in the 50s,” he said of his putting rank on tour. “If I was top 10 in strokes gained with the belly putter, it would have been tough to want to change. But I wanted to make a change. I’m always trying to get better. The element was that I didn’t want to be forced to switch. I didn’t want to be in a position where I felt like somebody was telling me how I can play the game. So I wanted to go ahead and do it.”

Simpson started to throw the broken pieces out. His wife, Dowd, suggested it go in the trophy case because of all the rewards he reaped with it. So maybe there’s room in the case for another trophy from the Sony Open.

There’s still plenty left to do, however.

Kuchar looked solid as ever and loves being on the greens at Waialae – smooth, small and relatively flat. It’s a big contrast from the big, sloping greens at Kapalua with plenty of grain. Kapalua also has wide fairways, and Waialae is more on the claustrophobic side.

As for Thomas? He’s not sure how he wound up tied for the lead.

The 21-year-old out of Alabama is considered one of the top rookies. Thomas knows he can play this well. He just had a hard time remembering the final few hours.

“It was probably the best zone and best focus I’ve ever been in,” Thomas said. “I knew I was playing well, but I really didn’t know how many under I was for the day, and I just kind of kept playing. It doesn’t happen very often in golf, and it’s really fun to happen. It’s probably maybe only the second time it’s ever happened to me.”

The other time was at a junior event. He was 8.

It sets up for a dynamic weekend at Waialae.

They were two shots clear of Tim Clark (65) and Troy Merritt (64). Defending champion Jimmy Walker had a 66 for his 15th consecutive round in the 60s in Hawaii. That put him in a group four shots behind, very much in the picture on a course where the leaders tend to be bunched up until the back nine on Sunday.

Calgary native and Monday qualifier Roger Sloan is the leading Canadian. Sloan has a share of 56th at 3-under.

David Hearn and Nick Taylor are a shot back of Sloan at 2-under. The pair are in a group sharing 69th spot.