Singh, Goosen among six tied for first-round lead at Riviera 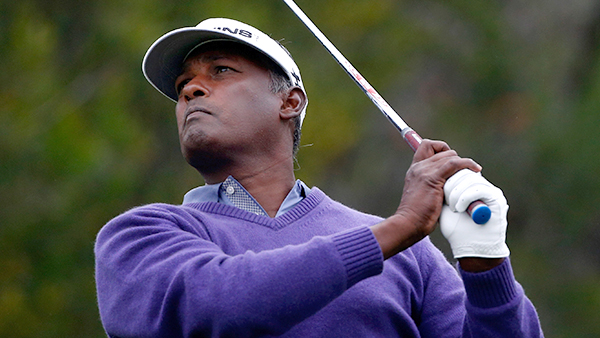 LOS ANGELES – This much can be said about a six-way tie for the lead after the opening round at the Northern Trust Open.

At least it was Thursday and not Sunday.

Vijay Singh and Retief Goosen, a decade ago among the top five players in the world, were together again at the top of the leaderboard after each posted a 5-under 66 while playing in the same group. The 51-year-old Singh hasn’t won since 2008. Goosen, who turned 46 earlier this month, hasn’t won since 2009.

The real star, as usual, was Riviera.

The fabled course off Sunset Boulevard remains such an interesting test that on a day when an overcast sky gave way to sunshine, with barely enough wind to move leaves on the eucalyptus trees, no one could do better than 66 and the average score was just under 73.

“There were no easy shots,” Dustin Johnson after a hard-earned 70.

That explains why no one could get too far ahead, and that’s not unusual.

And yes, there was a six-way tie on Sunday one year. That was in 2001, when Robert Allenby ended a six-man playoff quickly with a 3-wood to 5 feet on the 18th hole in a cold rain, a magnificent shot that was worthy of a plaque in the fairway. All he got was the first-place check, and when the Australian returned the following year to register as the defending champion, the woman behind the desk didn’t recognize him. She probably would now.

Just three years ago, nine players were tied for the lead after the opening round.

“They are just quality holes out there,” Geoff Ogilvy said after a 68. “It’s an incredible bunch of holes on not an amazing piece of land, really, compared it to a lot of other great courses. Cool and interesting stuff – uphill, downhill, you have to move the ball both ways, awkward angles. It’s just a great golf course, really. And it’s immaculate this year. Nobody likes the drought in California, but it’s good for a course like this to dry out a little bit.

“When golf courses are stressed, they actually play their best,” he said. “And it’s getting really close to that level.”

Singh and Goosen know a thing or two about droughts.

Singh, a three-time major champion in the Hall of Fame, won the Deutsche Bank Championship in 2008 to effectively wrap up the FedEx Cup title, and he hasn’t won since then. About the only news he has made in the last couple of years is the lawsuit against the PGA Tour over its anti-doping policy.

He moved into a share of the lead with a 35-footer from just off the 15th green, followed by a 15-foot birdie putt on the par-3 16th hole. He finished strong except for missing a pair of birdie putts inside 12 feet.

“I’m finally not hurting as much as I did the last five years,” Singh said. “That’s a big part of playing good golf. You’re not hurting, you can go out and play and you’re comfortable. Right now, nothing hurts. The golf swing feels good, and I’m happy to be playing.”

Goosen won a pair of U.S. Open titles more than a decade ago, but his last victory was in 2009 at Innisbrook in Florida.

Both now are outside the top 200 in the world ranking. They played with 28-year-old Brian Harman, who shot 78.

Defending champion Bubba Watson ended his streak of 43 consecutive holes without a bogey at Riviera when he hit into the trees to the right of the fifth fairway. He did enough right for a 70, a respectable start. He even made a birdie on the 10th hole, which sounded like an accident.

“As we can see throughout the years, that hole is very, very difficult, and par is a great score there,” Watson said. “It might just be because I’m so scared to death of the hole.”

Ogilvy and Justin Thomas were among those at 68, while Jordan Spieth rallied for a 69 with a 31 on his front nine.

Graham DeLaet leads a field of five Canadians following an opening-round 1-under 70 for a share of 16th-place. Adam Hadwin sits T68 at 2-over.