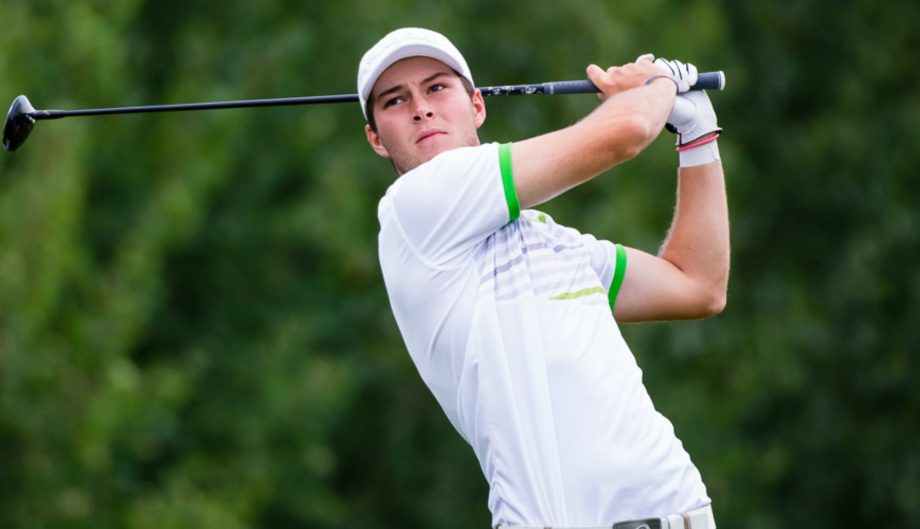 All six players teed off in the morning wave on Thursday and made a combined 35 birdies, five eagles, and nine bogeys.

Calgary’s Riley Fleming joined the group of co-leaders at 6-under in exciting fashion. Fleming was 4-under for the day heading into his final hole, the par-4, 428-yard No. 18, when he holed out for eagle from 180 yards with a 7-iron.

“It came out a little low and I actually said to my caddie that I thought I nuked it and I thought it might be a little long,” said Fleming. “It was actually about 15 seconds later that everyone started to yell. So I was glad it went in. I wasn’t sure if it was hanging on the lip or something.”

Fleming is making his 35th career start on the Mackenzie Tour this week. The Calgary native has played in only one event this season—last week’s Syncrude Oil Country Championship—where he missed the cut after rounds of 66-81.

He has posted eight top-25 and two top-10 finishes in his Mackenzie Tour career. His best finish was a T4 at the 2015 Syncrude Boreal Open. The 2013 Alberta Open Alberta Amateur Champion played one season of collegiate golf at the University of Texas-Arlington before turning professional in 2014.

Fellow Calgarian Wes Heffernan, who is playing on a sponsor’s exemption this week, carded six birdies, 2 bogeys and an eagle on the par-5 13th.

“For me this is my only event playing on tour this year, so for me to shot 65 is pretty satisfying,” said the 2008 Players Cup Champion. “Playing with Riley, who’s a friend of mine and also from Calgary, is a pretty good pairing and we both played well, so we fed off each other and tried to make as many birdies as possible.”

Should Fleming or Heffernan go on to win this week, they would become the first Canadian to win on the Mackenzie Tour since Adam Cornelson won the 2016 Bayview Place Cardtronics Open.

“The one shot I did pretty off line today I got pretty lucky on 10, so I was able to have a birdie look,” said Vogel, who is No. 8 in the Order of Merit. “I hit it way right.”

Vogel’s tee shot ended up just short of the tee box on the second hole, but he was able to save par by hitting a nine iron to 12 feet and two-putting from there.

2016 ATB Financial Classic Champion Charlie Bull matched his career-low round on the Mackenzie Tour with his 65 on Thursday.

Bull’s 2017 Mackenzie Tour season has seen four missed cuts in five starts, but a recent swing change turned things around for the England native, who finished T27 two weeks ago at the Mackenzie Investments Open.

“I had an issue with my grip that no one picked up on and a friend of mine down in Florida picked up on it, and I changed it,” said Bull. “It’s obviously pretty uncomfortable changing your grip. It’s one of the toughest things to change, but it is one of those things I had belief in.”

Despite missing a two-footer on his final hole, the par-4 No. 9, co-leader Chase Wright took away a lot of positives from his first-round.

“I was real patient and drove the ball well. It was pretty simple till the last hole,” said Wright, who is playing his first Mackenzie Tour season.

Like Wright, fellow Mackenzie Tour first-timer Max McGreevy had one bogey on his scorecard, but it came at his first hole (No. 10). He bounced back with 6 birdies and an eagle.

“I made a lot of putts—just made it very easy for me out there,” said McGreevy, who graduated from the University of Oklahoma in May, where he and his team won the 2017 NCAA Division I Men’s Golf National Championship. “I haven’t played too many links-style courses. The greens are firm and fast, and I only think they’re going to get firmer and faster as we go on, so I think they have the course running great.”