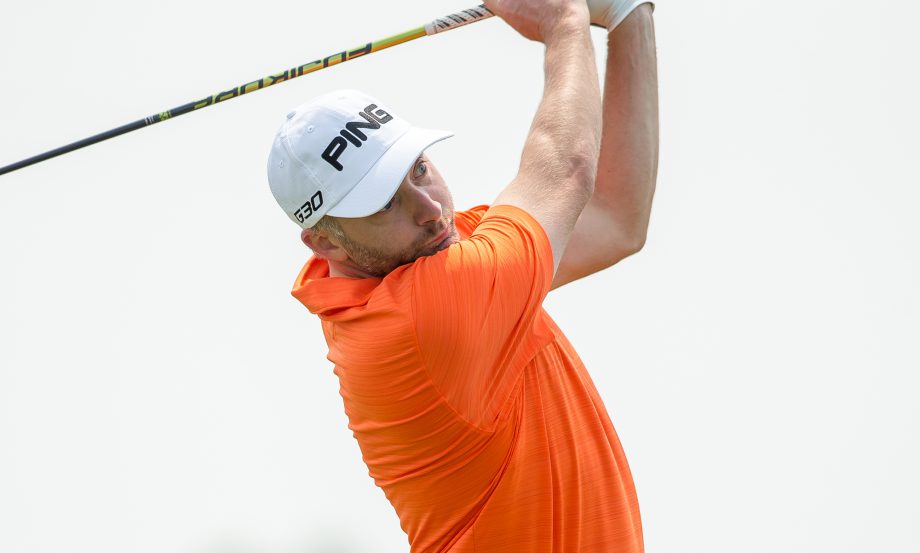 Skinns, who entered the day with a one stroke lead, managed a 5-under 67, while Marinell birdied three of his first four holes and three of his last five to match Skinns at 18-under par, one ahead of Dundas, Ontario’s Chris Ross and New York’s Michael Miller.

“It was kind of a battle and I think it was good for both of us. It kind of pushed us to the top of the leaderboard,” said Marinell, who ranks 18th on the Order of Merit with three top-10s this season. “I think we both kind of fed off each other a little bit. I got off to a hot start and kind of fizzled out, and when I fizzled out he started getting hot as well. We both kind of pushed each other a little.”

With 15 players within five shots – the same margin from which Iowa’s Nate McCoy came back to win at last year’s Wildfire Invitational –  heading into Sunday, Skinns said he was looking forward to one more day of dueling with Marinell and the rest of the field.

“That’s where we all want to be, and it’s a fun place to be with people watching. Chase is a lot of fun to play with, so hopefully we can have some fun tomorrow as well,” said Skinns, who finished T6 at Wildfire in 2013.

For Marinell, who confessed he had doubts about his ability to compete on the Mackenzie Tour at the start of the year, Sunday represents another chance to establish himself in his first full season as a pro. The 23-year old can move as high as no. 3 on the Order of Merit with a win Sunday.

Ross, who recorded the best round of the day with an 8-under 64, posted the earlier clubhouse lead with a birdie at the last and was later matched by Miller with a two-putt birdie of his own.

5: The stroke deficit 2014 champion Nate McCoy made up before winning last season.

-18: David Skinns and Chase Marinell’s total to par through 54 holes, the lowest such total on the Mackenzie Tour this season.

“It’s strictly tee balls. If I get it in play, I’m going to have a lot of opportunities, especially out here. You have so many wedges in your hands. I’ll need to go as low as I possibly can. I’m probably going to show up tomorrow and have a bunch of guys in front of me before I even tee off.” – Ted Brown on the improvement in his game and his 2015 season on the Web.com Tour, where he made three of 13 cuts.

“This is the biggest tournament where I’ve put myself around the lead heading into the last day, so I don’t know how I’ll sleep tonight – I know it’s cliché – but we’ll just have to see.” – Michael Miller on being in contention heading to the final day.

“I had a good day. I got off to a good start yesterday and kind of fell off at the end. Today, my wife was there and that just let me focus on other things. Just having my wife and my mom and my daughter, and I know my dad’s watching closely back home, is very important to me. I’m definitely going to be nervous, but she’s a calming influence on me and knows what to tell me.” – Christopher Ross on his wife and caddie, Stephanie, helping him to an 8-under 64 on Saturday.