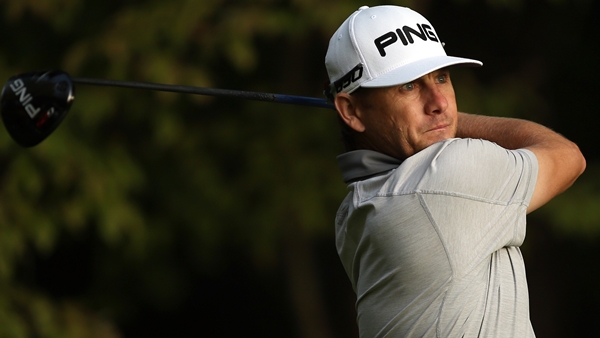 GREENSBORO, N.C.  – Heath Slocum needs a strong finish at the Wyndham Championship to earn a spot in the PGA Tour’s postseason.

Scott Langley might not be on the playoff bubble – but he sure knows how his friend is feeling.

Slocum and Langley each shot 5-under 65 for the second straight day Friday to share the lead at 10-under 130.

Brian Stuard, Nick Watney, Martin Laird and Andrew Svoboda were a stroke back. Watney and Svoboda shot 64, Stuard had a 65 and Laird a 66.

Ryo Ishikawa had the best round of the day – a 62 that was one stroke off the course record and included six birdies on the back nine.

Since the tournament returned to Sedgefield Country Club in 2008, every two-day leader until now had been at 11 under or better.

In what’s become an annual rite of mid-August, the field is littered with players trying to prolong their seasons for at least one more week by cracking the top 125 on the points list and qualifying for the first round of the playoffs, which begin next week at The Barclays in New Jersey.

Langley isn’t one of them.

He isn’t feeling quite as much stress as he did here last year, when he missed the cut yet squeaked into The Barclays at No. 124.

“Last year, so much going through my head as a rookie, not knowing how to handle it,” Langley said. “I was thinking a little too much about things that I really have no control over in terms of keeping my card, what other guys are doing. Lesson learned.”

Langley ran off three straight birdies early in his round and closed with two in a row after putting both of his approach shots less than 6 feet from the stick.

At No. 81 on the points list, his spot next week is safe.

He’s at No. 158 but is well aware that if you can somehow get into the playoffs, anything can happen.

Five years ago, he made the playoffs “by the skin of my teeth” at No. 124 – and then went on to win The Barclays.

“I came into this week trying to create a little bit of momentum for me to whether I could somehow get myself into the playoffs or the (Web.com) finals,” Slocum said.

Slocum had seven birdies and moved atop the leaderboard after a run of four in a row late during his second consecutive 65.

He sank a 20-foot birdie putt on the 13th before twice sticking approach shots within seven feet of the flagstick and converting those short putts.

“It was a good stretch, and obviously at this point, you’re going to need a lot,” Slocum said. “You’re going to have to have some of that to keep yourself in contention and go for it.”

Indeed, that put the Florida player in position to challenge for his fifth PGA Tour victory and first since the McGladrey Classic in 2010.

Svoboda briefly joined them at 10 under with a birdie on the 17th, but slipped back after missing a 20-foot par putt on the 18th and closing with a bogey.

First-round leader Camilo Villegas, who opened with a 63, put two strong rounds together after his 69 left him in a pack of players two strokes back.

He had three birdies but closed his round with his first two bogeys of the tournament, coming on the 17th and 18th.

Still, his low score was an indication of progress: He struggled each of the last two times he held a first-round lead, missing the cut at last year’s Honda Classic and finishing 71st at the John Deere.

“The golf course is not easy,” Villegas said. “Seven-under out here was pretty good yesterday. One under out here today wasn’t bad. I’ll take that and keep going.”

Among those bubble players who came to Sedgefield hoping to play their way into the postseason, No. 125 Paul Casey shot a 69 to move to 6 under and put himself well past the cut line of 2 under.

Others ran into bubble trouble: No. 122 Robert Allenby, No. 127 Charlie Beljan and No. 128 Greg Chalmers were among the borderline players who missed the cut.

Brad Fritsch is the leading Canadian, he’s tied for 7th after carding a 63 in Friday’s second round.