A slow start for Woods at soggy Cadillac Championship 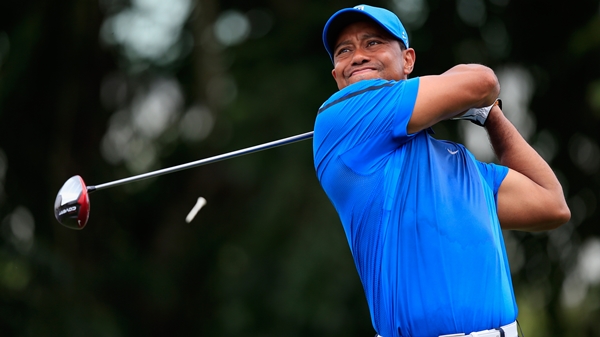 DORAL, Fla. – Tiger Woods only made it through 10 holes Thursday – this time because of the weather, not his back.

The debut of the new Blue Monster, and the return of Woods, received an incomplete grade Thursday when the opening round of the Cadillac Championship was halted more than two hours because of menacing thunderstorms.

Harris English was among only six players who finished the round, hitting 5-iron into the par-3 ninth hole and rolling in a 45-foot birdie putt for a 3-under 69.

The golf course and the world’s No. 1 player showed enough.

Woods, who walked off after 13 holes Sunday in the Honda Classic because of lower back pain and spasms, said he warmed up well and felt good during the delay. His golf didn’t look all that great. He was 2-over par through 10 holes, ending the day with a wedge that came up some 20 yards short of his target, leading to a three-putt for bogey from about 55 feet.

“I’m ready to go back out tomorrow and play well,” he said.

Trump National Doral, completely overhauled by Gil Hanse, showed plenty of bite on a windy, cloudy afternoon. Jason Dufner was going along beautifully for 10 holes until he struggled to find fairways in a crosswind. Brett Rumford began his round by hitting four shots before he put one in play. Three went into the water on the par-5 10th, and he started out with an 11.

“Mr. Trump wanted a very tough test on the Blue Monster, and I think that’s what he got,” English said.

Dufner, Hunter Mahan, Francesco Molinari and Patrick Reed also were at 3 under when the round was suspended by darkness. The 62 players who failed to finish will return Friday morning to complete the round.

Russell Henley, coming off a playoff win last week at the Honda Classic, made only one par in six holes on the back nine – two birdies, three bogeys. He was in the group at 2 under that included Masters champion Adam Scott, who is in the Nos. 1-2-3 group with Woods and Henrik Stenson.

Stenson might have hit the most memorable shot of the day – a cold shank from the middle of the second fairway that sailed at a 45-degree angle into bushes.

Scott has a chance to replace Woods at No. 1 in the world if he wins this World Golf Championship and Woods finishes worse that fifth.

Rory McIlroy got off to a blazing start with four birdies in five holes, only to end the back nine with back-to-back bogeys with a long three-putt bogey and a tee shot on the 18th that caught the edge of the water and bounded into the hazard.

That might be the most penal aspect of the new Doral. Anything hit toward some of the edges feeds toward the water, and there’s a lot of water in play.

Not even English was immune. His tee shot on the 18th found the water, and he still had 4-iron to get to the green. But he bounced back on the par-5 first hole by smashing a tee shot so far with help from the wind and the firm fairways that he had a 7-iron left from 213 yards. He hit that to 12 feet for a two-putt birdie, and he was bogey-free the rest of the way.

Dufner said he hasn’t had to think his way around a golf course this much since he was at Muirfield last year for the British Open, even though the tracks are nothing alike.

“This used to be a golf course where you grab your driver on every hole, swing for the fences and play from there,” he said. “You can’t get away with that here at Doral anymore.”

Dufner didn’t feel comfortable with driver on the 14th, so he laid back and had 236 yards left to the par 4. He hit 3-iron and made birdie, anyway. Other times, he failed to dial it back and paid the price.

“You’re not going to go through this tournament on this golf course anymore with no bogeys,” he said. “Everybody is going to be making some bogeys here and there, so pretty happy with where I’m at.”

Jordan Spieth already had three bogeys and a double bogey on the par-5 12th hole. He countered with five birdies and was even par through 15 holes. Only 19 players were under par when the round was stopped.

Woods made two bogeys without a single birdie. He’ll have eight holes remaining Friday morning to make up some ground.

“Should be a long day for all of us,” Woods said. “Hopefully, tomorrow I can get back out there in the morning, play well and work back to even par by the end of the first round, then shoot a low one in the afternoon.”

DIVOTS: Brendon de Jonge said he injured his right ribs in the final round at the Honda Classic. He is on pain medication, which he said makes him feel a bit light-headed. The Zimbabwean opened with a 76. He said he would take next week off and have an MRI. … Canada’s Graham DeLaet only got 9 holes of play in Thursday – he was 4-over par thanks to two bogeys and a double bogey.