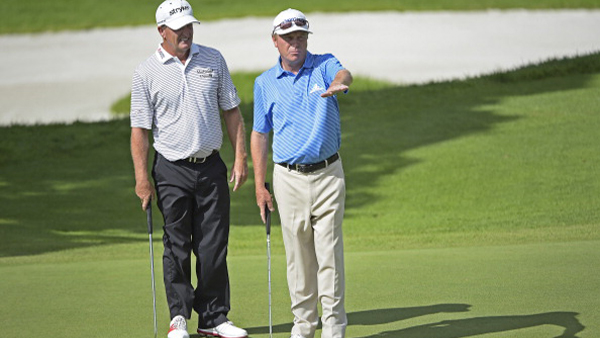 RIDGEDALE, Mo. – Jeff Sluman and Fred Funk teamed to win the Champions Tour’s Legends of Golf on Sunday, and Jim Colbert and Jim Thorpe topped the Legends Division for players 65 and older.

Sluman and Funk finished with a 6-under 48 at Top of the Rock, the first par-3 course used in a PGA Tour-sanctioned event, to beat Jay Haas and Peter Jacobsen by a stroke.

The winners finished at 20-under 159. They opened with an 11-under 61 in better-ball play on the regulation Buffalo Ridge course and had a 50 on Saturday on the par-3 layout.

Haas and Jacobsen, the second-round leaders, finished with a 50.

Sluman and Funk had a 1-under 26 in the opening alternate-shot nine and closed with a 5-under 22 in the best-ball nine. Sluman also won last year, teaming with Brad Faxon in Savannah, Georgia.