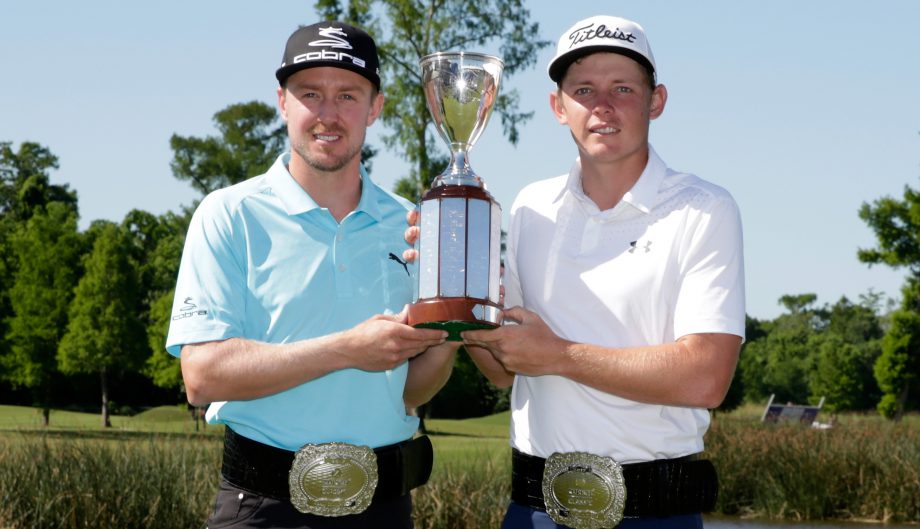 AVONDALE, La. – The team of Cameron Smith and Jonas Blixt won the Zurich Classic on the fourth playoff hole Monday, capturing a new-format tournament that had been held over a day because of darkness.

Smith hit a 58-yard approach shot within 3 1/2 couple feet of the pin, and the Aussie sank a birdie putt on the par-5 18th hole to give himself and his Swedish teammate the victory. Smith and Blixtcould have won on earlier playoff holes but missed short birdie putts.

For the 23-year-old Smith, this was his first PGA Tour victory.

Kevin Kisner and Scott Brown had combined for a 12-under 60 Sunday to force the playoff. Kisner made a chip-in from nearly 95 feet on No. 18, but darkness prevented further play.

Blixt and Smith led by a stroke after two rounds and by four after three. They had fallen behind by two strokes, with Kisner and Brown birdieing 10 of their first 11 holes Sunday. But they rallied with birdies on Nos. 12, 15 and 16 to regain a one-stroke lead heading into the final hole of regulation, which they wound up having to birdie to force the playoff after Kisner’s clutch chip.

Both teams finished four rounds at 27 under par at the par-72 TPC Louisiana in suburban New Orleans.

Each player on the winning team earned $1.02 million and 400 FedExCup points.

This is the first team event on the PGA Tour since the Walt Disney World National Team Championship in 1981.

The tournament began with 80 two-player teams, with players choosing their teammates. Many said they chose friends on the Tour rather than research whose game best complemented their own. It made for a relaxed environment, the camaraderie showing golf’s looser side. The new format attracted half of the top 30-ranked players.

The players on each team alternated shots in the first and third rounds. In the second and final rounds, each player hit his own balls and each team took the best score per hole. The playoff was held in the same format as the final round.

Kelly Kraft and Kevin Tway finished third at 23 under Sunday. Jordan Spieth and Ryan Palmer were fourth. Six teams tied for fifth, including the pairs of Jason Duffner-Patton Kizzire and Bubba Watson-J.B. Holmes.