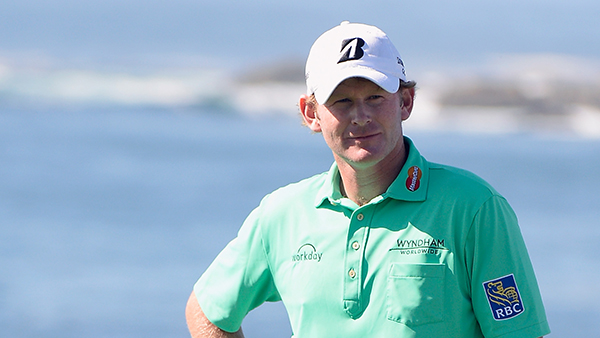 PEBBLE BEACH, Calif. – The fog began to roll in off the coast of Pebble Beach, though it didn’t matter. Brandt Snedeker had the AT&T Pebble Beach National Pro-Am in hand, and he had a clear view of where he was going.

There is no better wait than on the 18th tee at Pebble Beach. For Snedeker, there was no better feeling than walking up the famous closing hole with a four-shot lead, his ball in the middle of the fairway and a big reward for a lot of hard work and hard times.

A conservative par gave him a 5-under 67 and a three-shot victory Sunday, and it brought a renewed sense of direction.

For the first time in more than three years, Snedeker fell out of the top 50 in the world at the end of last year after his worst season on the PGA Tour. He wasn’t in the Masters or any of the World Golf Championships. He already was making plans to play new tournaments. He was going to play every week until the Masters to give himself every chance to secure another tee time at Augusta National.

All that changed in one week that was close to perfect.

Snedeker made only one bogey over 72 holes on three golf courses, and it still gnawed at him even as he left the room with a crystal trophy. He didn’t have a three-putt, no small feat on poa annua greens played on by 156 players and 156 amateurs over three days.

He’s in the Masters. By moving up to No. 31 in the world, he can count on all four World Golf Championships. He’s also in the PGA Championship (he already was eligible for the U.S. Open based on his top 10 at Pinehurst No. 2 last year). Snedeker was irritated at the thought the world best players might gather without him.

“Not fun,” he said. “Not when you’re used to it. I don’t like playing golf and not feeling like I can compete and win. For six months, eight months of last year I didn’t feel I could do that. I didn’t feel like my game was where it needed to be, it wasn’t sharp.”

He began working with Butch Harmon to understand his swing and how to play the game. That took time. And when the 2015 season began, it was time for him to prove all over that he belonged in the big events.

“This is going to be hopefully the kind of player I am for many years going forward,” he said.

That didn’t make Sunday at Pebble Beach easy. Snedeker might have looked calm during the final 5 1/2 hours. He was a wreck inside, especially in the early going when it appeared that any number of players would have a chance.

Jim Furyk had a one-shot lead and disappeared early with a 38 on the front nine, though it was three birdie putts inside 10 feet that really cost him. Furyk felt like he hit the ball where he was aiming and couldn’t believe he was losing ground. He closed with a 74, and for the ninth time since his last win at the 2010 Tour Championship, he failed to convert when he had at least a share of the 54-hole lead.

Torrey Pines winner Jason Day made a brief charge in the middle of the round. So did Pat Perez until a pair of bogeys around the turn did him in. The consolation for Perez was winning the pro-am title with Pandora Jewelry co-founder Michael Lund.

The big challenge from Nick Watney, who already had a dream week by having San Francisco Giants catcher Buster Posey as his partner. Watney opened with four straight birdies and had a two-shot lead. It turned on a bad break and a bad shot. A photographer shot off his camera at the top of Watney’s swing on the par-3 fifth, and he came up woefully short in a bunker and made bogey.

With a 4-iron for his second shot on the par-5 sixth, Watney hit his “worst swing of the week.” It sailed to right off the cliffs into Stillwater Cover, leading to bogey. Just like that, he was one shot behind, and after another pair of bogeys on the back nine, he was along for the ride.

“Even though I only lost a shot there, it was a momentum stall,” Watney said of the bogey on No. 6. “Along with making the bogey on No. 9 with a pitching wedge. Those two, if I could have two back, it would be that swing on 6 and the second shot into No. 9.”

There was no stopping Snedeker. He is swinging well. He is putting well. He was a winner again, his seventh on the PGA Tour. And he broke by two shots his tournament record with a 265, and the winning score to par at 22 under previously held by Phil Mickelson and Mark O’Meara.

“I’m just so excited about what’s next,” Snedeker said.

Canada’s David Hearn notched a final round of 2-under 70 to finish tied for 21st. Graham DeLaet’s 7-under 281 was good for a share of 57th place.