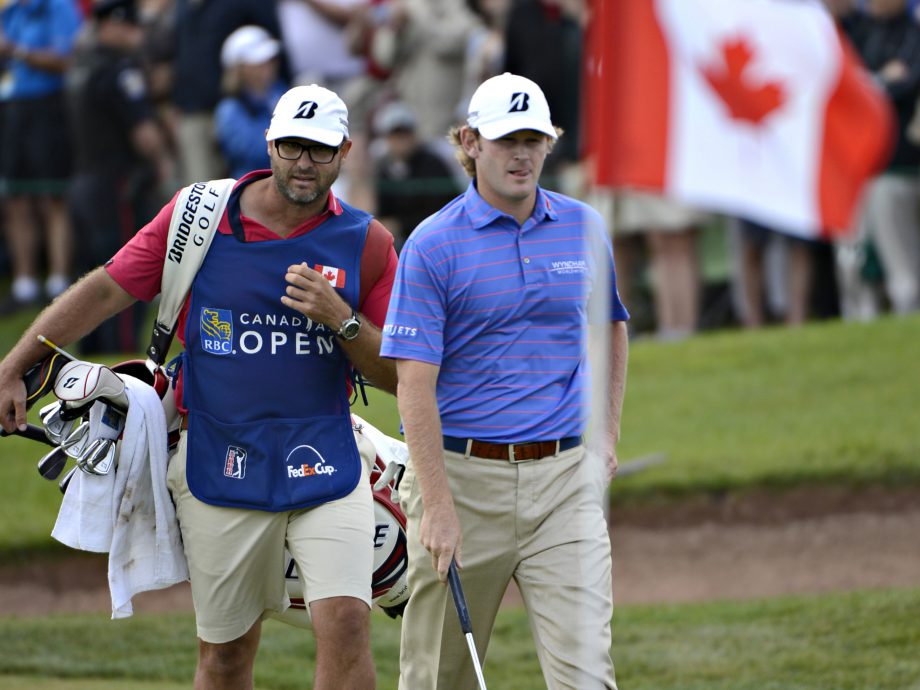 With the memories of a wild U.S. Open fresh in his mind, Brandt Snedeker returns to Glen Abbey Golf Club in Oakville, Ont., to tee it up on July 23rd with even better memories of the last time he played there.

A victory will do that.

At the U.S. Open at Chambers Bay in Washington State, Snedeker put on a charge in the final round, trying to catch eventual champion Jordan Spieth. Also in his sights was Dustin Johnson, who would finish T2 with Louis Oosthuizen. Unfortunately, he fell short, finishing eighth.

It was a far different story in 2013 when Snedeker hoisted the RBC Canadian Open trophy on Glen Abbey’s 18th green, having edged Johnson by three shots. Like this year’s U.S. Open, the 2013 RBC Canadian Open offered lots of thrills and unpredictable moments.

After 36-hole leader Hunter Mahan withdrew on Saturday to be with his wife, who was about to have their first child in Texas, Snedeker entered the final round at 14 under par, one shot ahead of David Lingmerth.

The turning point of that championship, as it has been many times in the past, hinged on Glen Abbey’s pivotal closing holes.

“Those holes do have a huge impact on the tournament,” Snedeker said in a recent interview.  “You have risk-reward on 16 and 18 where you can make up a lot of shots or you can make a careless mistake and get lapped by the field.  I love the course and have a great feeling heading back to Glen Abbey.  To be honest with you, my ball striking was probably at best a C-minus the last day and I was still able to pull out a win.  If I have good control over my ball striking and putt well, I like my chances this year.”

Despite not having his best ball-striking game that day, Snedeker looked to be cruising to victory until Johnson reached the par-5 16th in two after a 350-yard drive. Although Johnson’s eagle putt rimmed out, the birdie was good enough to tie him with Snedeker for the lead at 15 under with two holes to go.

(As a historical footnote, Glen Abbey’s 16th hole has marked a turning point in previous RBC Canadian Opens. In 1994, Nick Price lasered a 2-iron on the short par-5 that led to a one-shot win over Mark Calcavecchia. Ten years later, in the centennial edition of our Open, national hero Mike Weir, who entered the final round with a three-shot lead, three-putted the difficult green. He ended up tied with Vijay Singh, who would win the eventual three-hole playoff, dashing hopes for the first Canadian winner in 50 years.)

But Johnson’s drive on the par-4 17th went out of bounds and the resulting triple-bogey 7 took him out of contention. Snedeker matched Johnson’s birdie on 16 and cruised to the victory with a two-under-par 70.

“This is a tournament I said early on in my career I wanted to win just because my caddie [Scott Vail of Oshawa, Ont.] is actually from Canada and it’s his national Open,” Snedeker said. “It meant a lot to him and it means a lot to me. It’s the third-oldest tournament on TOUR and it has some great history to it and now to put my name on that trophy it means a lot.”

Once again, the 2015 RBC Canadian Open at Glen Abbey will feature a strong field, due in no small part to the commitment by RBC to the game of golf. In addition to our Open, RBC is also the title sponsor of The RBC Heritage on the PGA TOUR.

“My relationship with RBC has been great,” Snedeker said.  “Two of my wins have been at RBC-sponsored tournaments since I became an ambassador.  They basically saved the RBC Heritage tournament and that is one of my favourite tournaments all year.  They are doing so much for the game of golf, not only in Canada, but around the world.  I feel honoured to be aligned with such a great company.”

Glen Abbey will play host to the RBC Canadian Open for a record 28th time next year. Like Snedeker, the winners in 2015 and 2016 and beyond will join a pantheon of RBC Canadian Open champions at Canada’s most famous course, all of whom are commemorated on the Wall of Champions outside the clubhouse: Tiger Woods, Greg Norman, Lee Trevino, Vijay Singh, Mark O’Meara, Nick Price, Curtis Strange, Hal Sutton and more.

Juniors 17 years of age and under are permitted access to the grounds free of charge during the RBC Canadian Open. To download your FREE Junior Ticket, please click here.