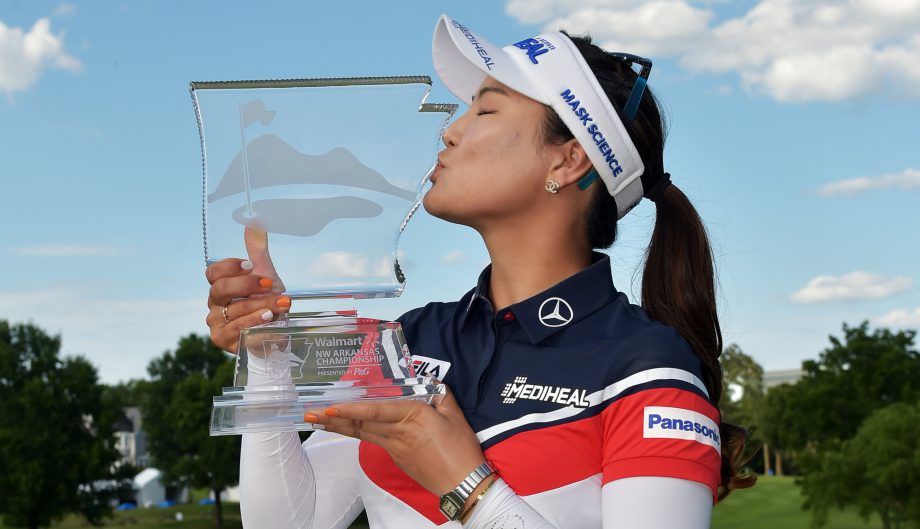 This time, So Yeon Ryu was able to celebrate – without any hint of drama or suspense.

And the third-ranked South Korean might just have used victory Sunday in the Walmart NW Arkansas Championship as a springboard for a possible rise to No. 1 in the world.

Ryu became the LPGA Tour’s first two-time winner this season, finishing at a tournament-record 18-under 195. She won the ANA Inspiration two months ago in California for her second major title, a controversial playoff victory after Lexi Thompson was penalized four strokes for a third-round rules violation reported by a television viewer during the fourth round.

“To be honest, after I won the ANA Inspiration, a lot of people said I maybe I didn’t deserve to win the tournament,” Ryu said. “It was understandable if someone was a big fan of Lexi … (Sunday’s win) feels a bit more free than after the ANA.”

Five strokes ahead after a course-record 10-uner 61 on Saturday, Ryu closed with a 69 for a two-shot victory over fellow South Korean player Amy Yang and Thailand’s Moriya Jutanugarn.

Ryu became the tour’s first repeat winner in the 16th event of the year, winning at Pinnacle Country Club four years after losing a playoff to Inbee Park in event.

“Hopefully, there are many more to come,” Ryu said before leaving for the KPMG Women’s PGA Championship in Illinois.

Ryu’s lead was at four shots midway through the final round, but it closed to two for a brief stretch on the back nine. Moments after Ryu fell to 17 under after missing the green on the par-3 11th en route to her lone bogey of the week, Yang gave the final round its first taste of suspense with a birdie on the 12th.

The birdie pushed Yang to 15 under, but she followed with bogeys on 13 and 14 _ and Ryu quickly extended her lead back to five shots with a birdie of her own on the par-4 12th. She also had a long par-saving up-and-down out of the bunker on the par-4 13th.

Despite the big lead to open the round, Ryu continued to play aggressively. She went at a difficult pin location on the par-3 sixth and on her third shot into the par-5 14th _ with the pin perilously close the front of the green and a steep slope leading into the water.

“I just tried not to do something special,” Ryu said. “Just better to be like me and play to win the tournament.”

Defending champion Lydia Ko set the previous tournament best of 17 under last year. The second-ranked New Zealander shot a 68 on Sunday to tie for 25th at 8 under.

Lewis began the day five shots back and in the final pairing with Ryu, but struggled for much of the day before closing with an eagle on the par-5 18th.

“So Yeon’s played great for a year now, so I’m not surprised,” Lewis said. “She did exactly what she needed to do today; made some good key par putts, especially there on the back side.”