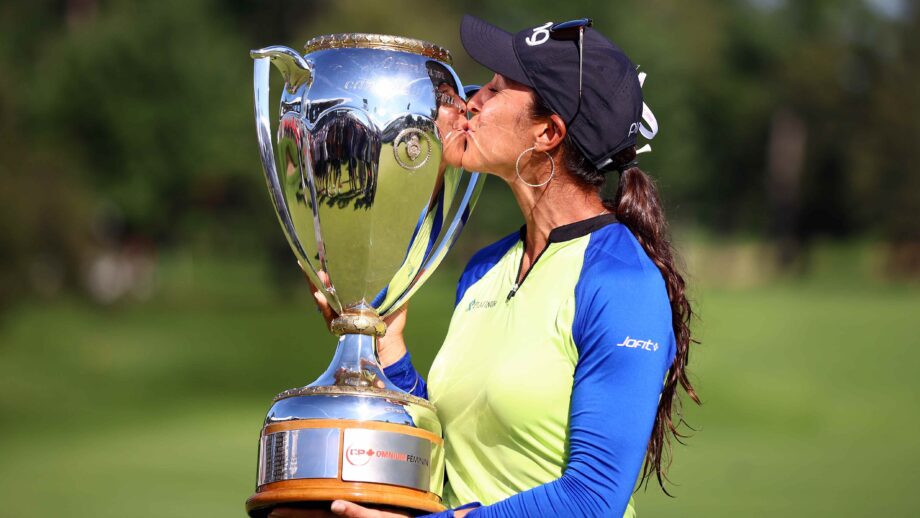 OTTAWA – Judged purely on number of fans and the volume of their cheers, Brooke Henderson appeared to be the runaway winner of the CP Women’s Open.

But the all-time winningest professional golfer in Canadian history finished 14 shots back of South Africa’s Paula Reto to tie for 49th at the national championship on Sunday. Reto shot a final round of 4-under 67 to win her first-ever LPGA Tour title by one stroke at 19-under overall.

“It was amazing,” said Henderson of the hundreds of fans that followed her around Ottawa Hunt and Golf Club. “I didn’t necessarily expect that because I was thinking, you know, they should go and see some really good golf happening.

“It’s amazing that they were out there the whole time, just so many people. I felt the love all week.”

Reto’s 4-under round was enough to lift her over third round co-leaders Narin An (72) and Hye-Jin Choi (69) of South Korea. It was also just enough to fend off a late charge from Nelly Korda (67) of the United States.

“I was trying not to watch the leaderboard,” said Reto, who played in the day’s final group with An and Choi. “I sort of knew where the girls in my group were, so I was just trying to make sure I stayed with them or maybe one or two ahead.

“That was the only thing I could control. You can’t do too much.”

A win would have lifted Korda back into the top spot on the women’s world golf rankings. She dropped down the standings after having to take time off due to a blood clot in her arm.

“I think I had a decent shot at it,” said Korda. “I played good golf, and honestly, I’m just grateful that I am playing golf and I’m out here, and I’m enjoying every second of it.”

Reto fired a course-record 9-under 62 at Ottawa Hunt and Golf Club in Thursday’s first round, besting Henderson’s former mark of 63 set at the 2017 CP Women’s Open. American Lindy Duncan matched Reto’s record in the second round, split over Friday and Saturday due to a rain delay.

Despite Reto’s consistently strong performance, Henderson remained the star of the show.

Growing up in nearby Smiths Falls, Ont., the 24-year-old Henderson’s image was used extensively in promotional materials, from decals on hotel windows, to wraps on the grandstands, and even hand-held signs of her face for children to hold.

Even as Henderson made par on her final hole of the day fans chanted her name, whistled, and cheered.

“It’s hard to put into words how much that means to me,” said Henderson. “I’m a Canadian and everyone out here is proud to be Canadian too, so it was just a great week.”

Hamilton’s Alena Sharp (67) finished tied for 17th at 10 under. It’s the third time that Sharp has earned the Sandra Post Award given to the low Canadian at the tournament.

Golf Canada said that more than 75,000 fans attended Ottawa Hunt and Golf Club over the week, an all-time record for the women’s championship and an impressive rebound after it had to be cancelled in 2020 and 2021. Those ticket sales are a 55-per-cent increase over 2017 when the tournament was last at Ottawa Hunt and Golf Club, which was the previous benchmark for the event.

“From fans, from commercials, from amateurs, from our field, it has just been a dream scenario being here for the 2022 CP Women’s Open,” said Golf Canada CEO Laurence Applebaum, who added that the only way it could have been better was if a Canadian had won the national open.

It was also a boon for Ottawa’s beleaguered tourism industry that has not yet recovered from the damage done by the COVID-19 pandemic or the anti-government convoy that occupied Canada’s capital in February and March. Tourism Ottawa projected that the golf tournament would have an economic impact of $13.4 million in the region.

Tournament director Ryan Paul said that Ottawa’s unique geographic position on the border between two of Canada’s most populous provinces was also a benefit.

“Anywhere we can host and bring in from multiple markets is big for us,” said Paul. “Bringing this event across the country and bringing it to new markets, whether they be Toronto, Vancouver, Ottawa, even Montreal, Regina, Calgary, Edmonton, Winnipeg, everywhere we’ve been has their benefits.”