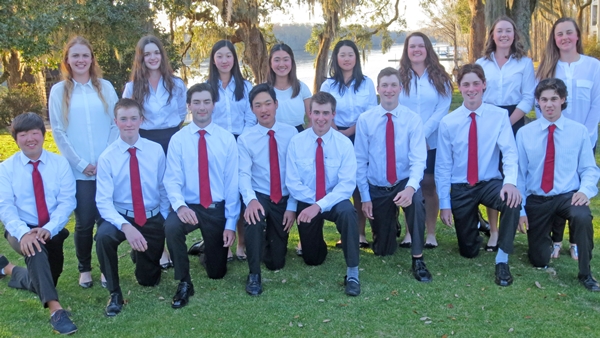 MURRELLS INLET, SOUTH CAROLINA – It was almost like déjà vu from 2014 as soggy conditions greeted the players at Wachesaw Plantation Club on the final day of the Can-Am Junior Team Matches.  The American team, consisting of juniors from the South Carolina Junior Golf Association, earned 147 of 288 possible points to defeat the Canadian squad, from the Golf Association of Ontario (GAO), 225 to 207 to earn the 2015 title of Can-Am Champions.

The competition got underway on March 21 with best-ball team matches. While the event was played in a match-play format, the scoring was slightly different than a traditional match-play. Each match played the full 18-holes and a point was awarded for each hole with tied holes counting for half a point.

After the first day, the American team held a 12-point margin over the Canadian juniors 78 to 66. Ontario’s lone win came from Grace St-Germain and Monet Chun who took their match 11.5-6.5. Brendan Seys and Kelvin Lim managed a 9-9 split in their match, as did the team of Madeline Marck-Sherk and Alyssa Getty.

The young men led off the Can-Am singles matches, during the final round on March 22, with Ontario posting one win, by Jake Bryson, and one halved match by Trevor Ranton. However, the American team captured the other six boys’ singles matches.  After the eight boys matches had concluded, the Americans extended their first day lead by an additional 20 points and were seemingly all but out of reach.

However, the lady Canadians came out firing with Grace St-Germain defeating Savanah Goodman by a 13.5 to 4.5 margin and Alyssa Getty handing a loss to Jodee Tindal 12.5 to 5.5, cutting the two-day lead in half after just two matches. The rest of the afternoon remained tight with Ontario’s girls winning two matches and the South Carolina team earning three.  Chloe Currie was a winner in her match, 10-8 over Victoria Huskey, and Isabella Portokalis defeated Morgan Cox 10.5 to 7.5. In the end, the South Carolina team held on for the 225-207 win.

It was a challenging final day on the course as wet conditions impacted the players and the course.  At the conclusion of play, it was a great weekend of golf for both GAO and South Carolina Junior Golf Association players.  It was also the closest that the Can Am Matches have been since 2010, when the Golf Association of Ontario youngsters last hoisted the Joseph T. Simons Can-Am Trophy.

“The highlight of the event was the impressive performance by the girls in the singles matches: the dominant wins by St-Germain and Getty along with the solid wins by Currie and Portokalis,” said Mary Ann Hayward, Manager of Sport Performance. “Although Bryson was the only boy to post a win in the boys’ singles matches, many of the boys played extremely well. All of the team members fought hard for every point gained on the last day and we are extremely proud of everyone for their performance in the matches.”

Team Ontario took advantage of the trip to include a training camp leading up to the matches. Thanks to the South Carolina Junior Golf Association, the Ontario team had the opportunity to train and play at three other courses in the area: True Blue Plantation, The Reserve Golf Club and the Debordieu Club.

“The week of the Can-Am Matches are always an important one for the team as we transition from our preparation phase into competition,” added Reggie Millage, Head Provincial Coach. “The team trained hard during the week leading up to the matches and we had some really positive results heading into the event. Overall, the team played well and we had some outstanding performances that got us as close to the trophy as we have been in years. The real benefit of the week though is how it will help our athletes get a jumpstart on our competitive season. If this week is any indication we should see some great results from our Ontario athletes in 2015.”

It should be noted that the matches are less about the competition and more about building relationships and celebrating the growth of junior golf in both Ontario and South Carolina.  The Wachesaw Plantation Club members and staff make this a truly unique event.  The 2015 Can-Am Matches were a success in terms of showcasing the game of golf and the relationships that have been built between the two countries, as well as the membership of Wachesaw Plantation Club. The Canadian team was hosted by the Wachesaw membership in a Member-Am event on March 18 consisting of a shotgun scramble team event followed by a luncheon.