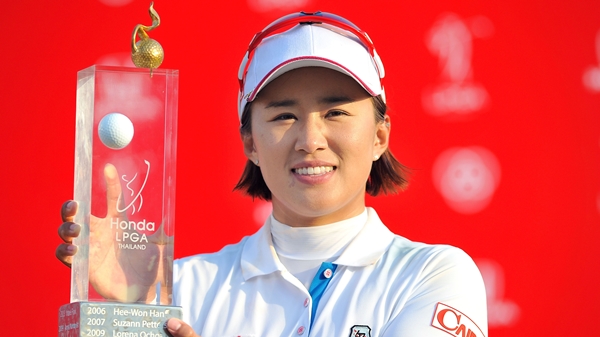 CHONBURI, Thailand – South Korea’s Amy Yang won the Honda LPGA Thailand on Sunday for her second LPGA Tour title, finishing with a 3-under 69 for a two-stroke victory over American Stacy Lewis and two others.

Yang broke a tie with Lewis with a three-stroke swing on the par-4 15th. Yang made a short birdie putt on the hole, and Lewis had a double bogey after blasting a 67-yard wedge shot over the green. Yang bogeyed No. 16 and closed with two pars to finish at 15-under 273 on Siam Country Club’s Pattaya Old Course.

“I don’t know what just happened,” Yang said. “I still can’t believe I did it today.”

The 25-year-old Yang is projected to jump from 16th to 11th in the world ranking.

“I was a little bit nervous out there, but I tried to focus on how low I can go today, just focus on my game,” said Yang, also the 2013 LPGA KEB HanaBank Championship winner in South Korea.

She has finished in the top five in her last tour starts. She was second last week in the Women’s Australian Open, two strokes behind top-ranked Lydia Ko.

“I worked hard in this offseason and I really wanted to come back and play well,” Yang said. “It came earlier than I thought. I’m going to keep working hard.”

“I played good, but I missed bunch of putts out there,” Tseng said. “I was just actually a little nervous out there when I was putting.”

Spain’s Beatriz Recari had a 63 to match the course record. She tied for fifth at 12 under with South Korea’s Sei Young Kim (65).