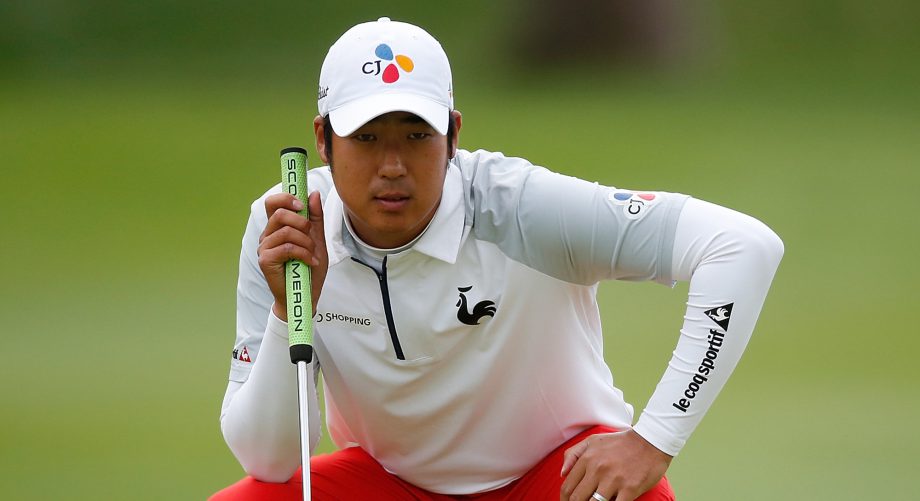 Lee had seven birdies and a bogey to reach 15-under 201 at Sycamore Hills.

“It was very windy out there so I tried to keep the ball low under the wind and hit a lot of low shots off the tee,” said Lee, who hit 13 of 14 fairways. “I’m very comfortable hitting low shots off the tee, but with my irons I just focus on getting my number and try to attack the pins when I can.”

Lee finished 15th on the Web.com Tour regular-season money list to earn a 2015-16 PGA Tour card and is playing the four-event series in a bid to improve his tour priority status.

“I just want to keep it in play tomorrow and focus on trying to hit a lot of good shots and make some putts,” said Lee, winless this season.

Lahiri, the first Indian player to qualify for the International Presidents Cup team, had a 70. Ranked 40th in the world, he tied for fifth in the PGA Championship.

“Just grinding all day,” Lahiri said. “It’s hard because I was hitting it all over the shop. But all in all, I’m just three back. If I can put another good 18 holes together tomorrow we’ll see if I can get over the line.”

The series features the top 75 players from the Web.com Tour money list, Nos. 126-200 from the PGA Tour’s FedEx Cup standings and non-members of the tour such as Lahiri who earned enough money to have placed in the top 200 had they been eligible to receive points.

The top 25 players on Web.com regular-season money list earned 2015-16 PGA Tour cards. They are competing against each other for PGA Tour priority, with regular-season earnings counting in their totals and the final leader getting a spot in The Players Championship. The other players are fighting for another 25 cards based on their earnings in the series.

Sam Saunders, Arnold Palmer’s grandson, was third at 11 under after a 65. He finished 137th in the FedEx Cup standings.

Second-round leader Jamie Lovemark had a 73 to drop into a tie for fourth at 10 under. He finished 12th on the Web.com Tour regular-season money list to earn a PGA Tour card.