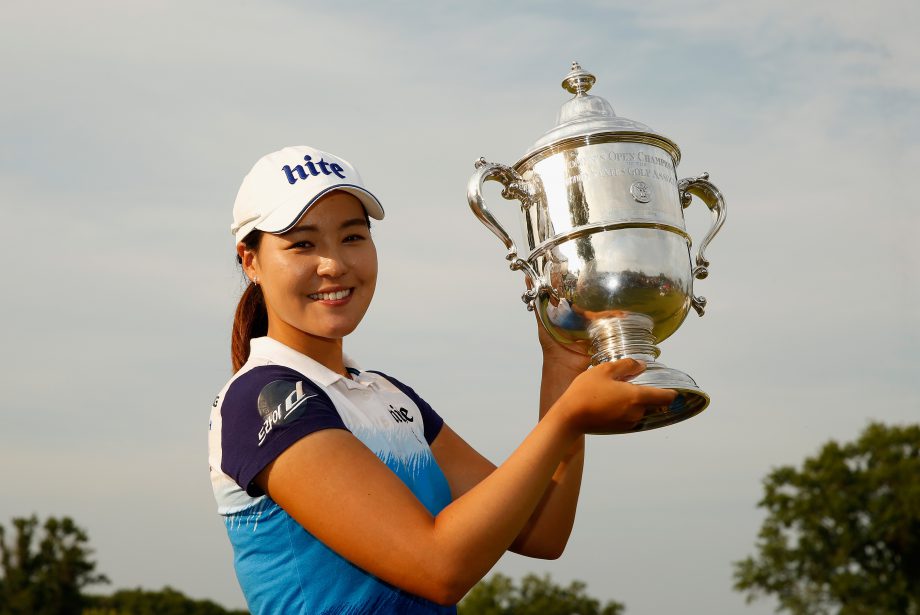 LANCASTER, Pa. – In Gee Chun’s modest goal for her first U.S. Women’s Open was to enjoy every new experience.

Boy, did she enjoy herself.

The 20-year-old South Korean stormed from behind, posting birdies on four of the last seven holes to rally for an unlikely one-stroke victory Sunday.

Chun shot a 4-under 66 in the final round and finished at 8 under, becoming the first player to win her U.S. Open debut since Birdie Kim in 2005.

“Everything I faced and I did here was completely new,” Chun said. “So all I did was enjoy the new stuff … I enjoyed it and had a lot of fun. Even though I’m Korean, here American fans supported me a lot and they gave a lot of claps. That has put me in the great rhythm of play, and I enjoyed that tournament rhythm.”

A bright smile rarely left Chun’s face, and that was part of the plan.

“Without thinking any negatively, all I could do was just enjoy the game,” she said. “That’s what has brought me to the U.S. Open win, I believe.”

The win was Chun’s fifth of the year after three in Korea and one in Japan. She credited her experience in four LPGA Tour events earlier this season for her success in the other events and preparing her for the rigors of the U.S. Open.

“With all those four wins this year, I got a lot of confidence coming into this tournament,” Chun said. “And that’s why I could enjoy every moment of the tournament.”

Third-round leader Amy Yang struggled in the middle of her round and then pulled within one by going eagle-birdie at Nos. 16 and 17. But she bogeyed the 18th and fell a stroke short.

Playing in the final group on the last day of the championship for the third time in four years, Yang squandered a three-stroke lead and settled for a 1-over 71 and second at 273.

Two-time champion and top-ranked Inbee Park (67) overcame putting woes and rallied late, tying for third with Stacy Lewis (70) at 5-under 275. Lewis was three back at the start of the round.

Defending champion Michelle Wie battled hip and leg injuries and limped in with an even-par 70, placing 11th at 2-under 278.

As Yang and Lewis drew most of the focus as the last grouping, Chun went about picking up strokes on the leaders. At 4 under heading into the final round at Lancaster Country Club, Chun picked up two strokes on the front nine, closing within two of the lead.

“I knew it wasn’t going to come down to the two of us,” Lewis said. “I knew somebody was going to shoot a number to get up there.”

At the troublesome 421-yard, uphill closing hole, Chun drove into the rough, chipped short and went on to make bogey, falling into a tie for the lead with Yang, who birdied 17.

But Yang failed again in her bid to claim the biggest prize in women’s golf. She also drove into the rough at the last hole, chipped short of the green and failed to get up-and-down for par, giving Chun the win.

“I did my best out there today,” Yang said.

Yang was tied for the lead heading into the final round of 2014 and second after 54 holes in 2012. She tried to put another failed final round into perspective.

“It was another good experience,” she said. “It just didn’t go as well as I thought, but I learned another great lesson here. And it’s going to make me better player, improve my game.”

Lewis’ bid for her first U.S. Open title was foiled by a pair of double-bogeys, with the most costly one coming at 15, a hole after she had moved into a tie for the lead. At the 15th, she drove into the rough, hit her second shot through the fairway, and then dumped her third shot into a greenside bunker before taking a 6 and falling out of contention.

“I think anytime you have a championship like this, you want to have somebody go out there and win it, and that’s definitely what happened there at the end,” Lewis said.

But, the two-time major winner admitted the loss stung.

“I’ll get over this eventually, but it will take a day or two,” Lewis said.

Park had three birdies on the back nine. Within two shots of the lead through 16 holes, the putting woes that dogged the 2008 and 2013 winner returned and her bid ended with a three-putt bogey at the 17th.

Wie grimaced in pain throughout the round. The nagging left hip and leg issues that have made this a forgettable season for the 25-year-old four-time LPGA Tour winner seemed to intensify in the final round. She repeatedly cringed and tried to take weight off her right side after drives. Her round did have one highlight, with her drive at the 234-yard, par-4 16th hitting the flagstick before she rolled in the short eagle putt.

Megan Khang was the championship’s low amateur. The 17-year-old from Rockland, Massachusetts, closed with a 1-over 71 and finished at 5-over 285.

Fan favorite Laura Davies, who is to be inducted into the World Golf Hall of Fame at St. Andrews on Monday, closed with her worst round of the championship, a 5-over 75. The 1987 champion, who was the oldest player in the field at 51, finished at 287.

Canadian teenager Brooke Henderson helped her bid to lock up LPGA Tour playing privileges for next season. The 17-year-old had a closing 4-under 66 and rocketed up the leaderboard, tying for fifth at 3-under 277.