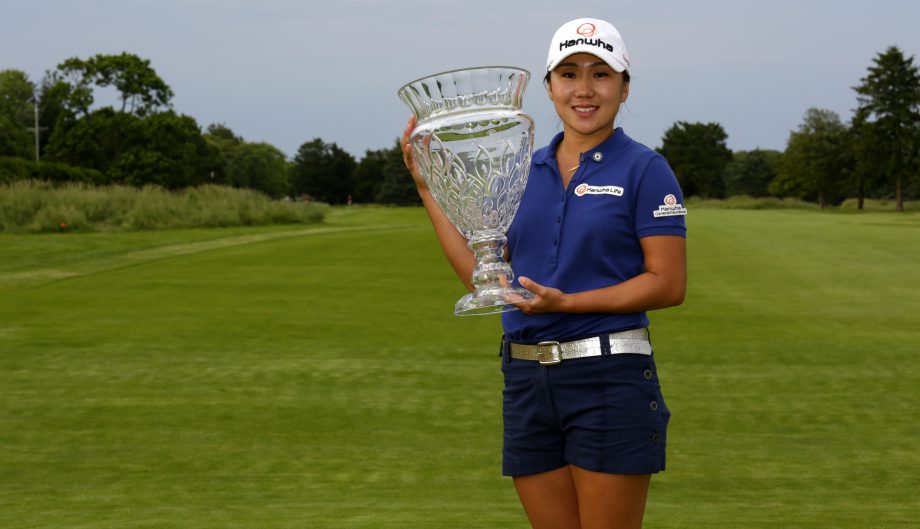 Tied with Paula Creamer for the second-round lead, Kim closed with a 2-under 69 in windy conditions for a two-stroke victory over Nordqvist at Stockton Seaview.

“Just so windy. … It was tough,” Kim said. “I feel really pleased with how I played today. Was really tricky and challenge out there, but I gave my best.”

“That took a long time. Now I feel much better,” Kim said. “But actually helped me to work on my upper body – more stronger – while I couldn’t work on my low body. But I’m really happy to come back stronger than was I before.”

“Just having the honour to back-to-back defend is quite amazing,” Nordqvist said. “There is a little bit of pressure coming into it, but it’s just been fun. I’m trying to embrace it. I love this golf course, I love hitting the shots. … It’s been really windy the last two days. The way I’m controlling the ball I’m really happy with. Just seem to be doing the right stuff, so I’m excited for the next couple weeks.”

“I just stuck it in there close today,” Wie said. “I was kind of frustrated after my first round. Couldn’t get my wedges in close at all, so I spent a lot of time on the range afterward just working on my wedge game. I’m glad it paid off today. I hit it a lot closer today, which felt good.”

"It felt good today to crush all of it and keep building momentum." @themichellewie with another top-10 finish for the season! #ShopRiteLPGA pic.twitter.com/JcjYbEJ4YM

Creamer had a 74 to drop into a tie for seventh at 6 under.

“You can’t shoot over par on Sunday, that’s for sure,” Creamer said.

Creamer’s group with Kim and Moriya Jutanugarn were put on the clock for slow play on the back nine.

“We were on the clock for four holes,” Creamer said. “That’s just not going to cut it. That’s unfortunate, because I said early on to the girls we got to try to keep up. I know we’re getting behind. But for four holes, that’s a long time. We just couldn’t get a rhythm. And especially with some of these pins and with the wind and everything, it’s all happening so fast and you kind of can’t regroup. I didn’t do a very good job of that.”

Jutanugarn closed with a 72 to also tie for seventh at 6 under.

On Saturday, sister Ariya Jutanugarn took the No. 1 spot in the world ranking to be released Monday. Taking the week off, Ariya Jutanugarn replaced Lydia Ko atop the ranking when So Yeon Ryu missed the cut. Ko, also skipping the event, was guaranteed to lose the top spot to Ariya Jutanugarn or Ryu, and Ariya Jutanugarn got the position when Ryu failed to finish solo third or better.